Just when many folks on Main Street were being introduced to 3D printing last year, a new technology that makes it seem downright medieval made a splash on the techie scene: 4D printing.

Even though it was introduced in 2013, 4D printing seems to still be flying under the radar among 3D printing followers. Here's what you should know about this still-in-the-lab technology that rivals a Houdini escape trick in the "wow factor" department. 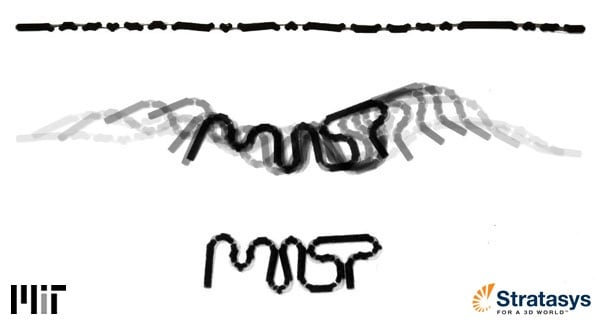 Stratasys' programmable materials can be coded to change properties when exposed to water. The pictured strand was programmed to spell "MIT." Source: Stratasys.

What is 4D printing?
While the name might sound a bit intimidating, 4D printing is a simple concept. The fourth "D" -- or dimension -- refers to time, which means that 4D printing is 3D printing plus the variable element of time. In other words, 4D printing involves 3D-printing objects that can eventually do one or both of two things: self-assemble and/or change properties based upon certain conditions.

Who's involved in 4D printing?

The main name to know in 4D printing is Skylar Tibbits, director of the Self-Assembly Lab at the Massachusetts Institute of Technology, who coined the term. Tibbits, a TED Fellow, introduced the topic of 4D printing when he presented at last year's TED conference. (TED stands for "technology, entertainment, and design.") Notably, MIT has early and deep roots in 3D printing.

The Self-Assembly Lab is using Stratasys' unique multimaterial Objet Connex 3D printing technology to print the materials that can self-assemble or change properties over time. These "programmable materials" were developed by Stratasys' researchers, and allow programmers to code for qualities that include color, transparency, stiffness, and flexibility.

The big breakthrough came when researchers coded the materials for water absorption. This opened the door to exploring using low-cost "environmental energy" to complete the manufacturing process. Researchers can now code a material to change its properties in a certain way when exposed to water.

Tibbits' research involves coding the material that comes off a 3D printer bed to change in specific ways when sprayed with water or dunked in a tank of water. His experiments involving strands of material squirming their way into certain shapes when exposed to water are reminiscent of the fun of Grow Monster toys -- but considerably higher-tech. The lab's long-term plan is to explore using other forms of environmental energy to transform products over time; water is simply the first step.

Autodesk's Cyborg software, which is under development, is being used to code the materials. This design platform has applications from the nano-scale to the human-scale.

A major value proposition of 3D printing is that it opens up innovative new design possibilities. That's because it's an additive manufacturing process that builds up a product layer by layer. It can be used to make products that can't be manufactured, or are cost-prohibitive to produce, using traditional subtractive techniques. Essentially, 4D printing blows open the design possibilities to an unfathomable extent, as it will allow designers to conceive of products that can change properties over time.

Cost savings is another huge benefit of 3D printing, because the technology eliminates the need for tooling and uses less raw material than conventional manufacturing techniques. With 4D printing, the moneysaving possibilities could expand to gigantic proportions. Remember, in 4D printing an object is coming off a 3D printer bed before it is fully assembled. So 4D printing involves transferring a good part of the manufacturing process from one that is energy intensive to one that costs much less because it uses environmental energy. This energy savings would also hold true with objects transforming themselves over time based upon certain conditions. Currently, manufacturers spend significant amounts of money embedding products with sensors, electronics, and other means of sensing and reacting to various conditions.

What are some examples of 4D printing?
The basic idea behind 3D-printing an object that has the ability to transform itself over time is simple: Under certain circumstances, it would be desirable for an end product or component of a finished product to change shapes and/or other properties. These circumstances could involve conditions such as temperature, humidity, light/darkness, or pressure.

Some examples include tires with treads that change shape to increase traction in wet or snowy weather; or a piece of wood furniture that becomes impermeable, or less permeable, when it senses humidity or water. Essentially, these products become "smart."

Takeaway
While 3D printing is surely an amazing technology in and of itself, the fact that it makes 4D printing a potential reality could very well turn out to be its greatest legacy.

It seems that 4D printing has a strong potential of becoming reality at some point in time. However, even if this mind-blowing technology never makes the leap from laboratory to commercialization, investors in Stratasys and Autodesk should be pleased that their companies are at the forefront of exploring new technologies that might emerge from -- or are related to -- 3D printing.