Who would have thought couple years ago that one of the most in-demand products in the United States would be sand? Thanks to the boom in hydraulic fracturing, though, sand proppant for fracking has become one of the hottest commodities out there, and U.S. Silica Holdings (NYSE:SLCA) has been reaping the benefits. Let's take a quick look at U.S. Silica's earnings and see if it was able to continue its streak of blowing by analyst expectations and producing record results.

Business update
Every day, the importance of quality sand for the oil and gas industry seems to increase. Not only are oil and gas producers increasing the amount of wells coming online on an everyday basis, but the total amount of sand used per well is growing at almost absurd rates. Just over a year ago, the average hydraulically fractured oil and gas well used 2,500 tons of sand. Today, that number has skyrocketed to over 8,000 tons per well.

This kind of swelling demand is just music to the ears of management at U.S. Silica. Total volumes sold are growing like gangbusters, and the demand is so great that the company has been able to increase prices enough to increase gross margins to 39% for sand. Also the company is looking to fulfill even more demand from this industry as it's progressing on its new mine and sand plant in Utica, Illinois, and is even developing another new greenfield mine site in Wisconsin.

By the numbers: revenue details
Total revenue for the quarter came in at $241.3 million, which was well above the analyst consensus estimate from S&P Capital IQ of $231.5 million. This quarter's sales represented a 67% increase in revenue over this time last year, and it's the fifth straight quarter where U.S. Silica has either met or exceeded analyst expectations for quarterly revenue. 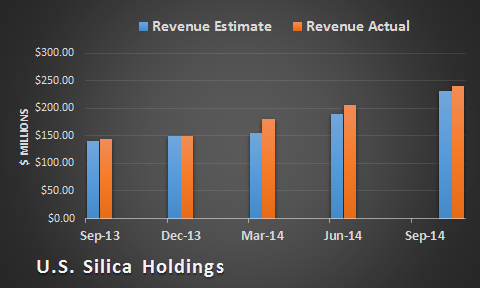 Total volumes sold reached 2.993 million tons, up 42% year over year and up 15% sequentially. Just about all of that increase came from its oil and gas segment. In oil and gas, total revenue was up 98%, and over 60% of total volumes sold were via the much more lucrative basin transloads.

A look at earnings
Normalized earnings per share for the quarter came in at $0.79 per share, $0.10 better than the Cap IQ consensus estimate for the quarter. This quarter's EPS represented an 88% improvement over the same quarter last year. 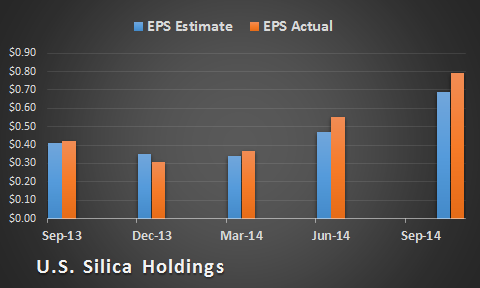 With total cash and short term investments creeping up to $196 million this quarter and total long term debt of $366 million, the company is in very good financial health and shouldn't have too many problems financing its capital budget for the rest of the year and beyond.

As the end of the year draws closer, management seems to be more and more optimistic about U.S. Silica's outlook. Management has announced that the company should reach the higher end of its guidance for adjusted EBITDA of $230-$240 million, which is already higher than last quarter's guidance of $215 to $225 million.

According to Capital IQ estimates, the company should achieve earnings per share of $0.74 on quarterly revenues of $243 million.

What a Fool believes
The boom in hydraulic fracturing has been an absolute cash cow for U.S. Silica this past year, and many of the long term contracts it has developed with its customers in the oil and gas industry will likely mean that the company should continue this success for many years to come. However, if oil prices continue to slip any further from where they are today or stay at this level for a while, then several oil and gas producers could be forced to scale back their drilling programs and eventually hurt total sand demand. Long term, though, demand for hydraulic fracturing proppant should remain strong for many years to come, and U.S. Silica's position as a frac sand supplier should mean good things for investors for years to come.