In terms of legendary investors, there are few that stand taller than Warren Buffett. Dubbed the Oracle of Omaha, in roughly six decades, Buffett managed to turn roughly $10,000 into what Forbes estimates is a net worth in excess of $68 billion as of this past Friday.

Buffett's formula for success is pretty simple: He looks for high-quality businesses and sticks with those companies over the long run, allowing time and compounding gains to take care of the rest. As Buffett has been previously quoted saying with regard to the holdings of his conglomerate Berkshire Hathaway (NYSE:BRK.A) (NYSE:BRK.B), "Our favorite holding period is forever."

One company on that potential "hold forever" list of Buffett's is technology and telecom giant Verizon Communications (NYSE:VZ). Though Berkshire's portfolio is known for being financials and consumer products-heavy, Buffett does own 15 million shares of Verizon, equating to more than $730 million in market value.

But, the big question we should be asking here is: Why is Verizon one of the biggest Warren Buffett stocks? Let's take a closer look at the reasoning behind Buffett's faith in Verizon, as well as deduce whether or not the telecom giant is still worth investors' money.

Why Verizon is one of the biggest Warren Buffett stocks

Buffett's plan to profitability (i.e., buy and hold) may be as vanilla as it gets, but the reasoning behind his attraction to Verizon is likely a bit more complicated.

First and foremost, the Verizon brand is highly recognizable and relatable with consumers. According to BrandZ's 100 most valuable global brand list of 2013, Verizon ranked 12th on the list, with a brand value of $53 billion, 8% higher than in 2012. What's more impressive is that Verizon is predominantly focused within the U.S., yet it ranked 12th among global brands, including Wells Fargo, Amazon, and Wal-Mart. Companies with strong brand recognition can often rely on their logo and loyal customers rather than excessive advertising to bring in new business.

Secondly, Verizon's business is predominantly inelastic. Although all we really need is food and water to survive, wireless phone service and accessibility to the Internet are practically necessities now, too. As such, the price for wireless services and the demand for wireless subscriptions tends to not be affected much, if at all, by the strength or weakness in the U.S. economy. Any business that can produce predictable cash flow and maintain its pricing power during a recession is likely to catch Warren Buffett's attention.

Third, Verizon has comparative advantages that keep its profits flowing. For starters,, it has the nation's largest 4G LTE wireless network, which means it holds a comparative network advantage over the likes of AT&T (NYSE:T), T-Mobile, and Sprint, who have to spend heavily in order to try and catch up. In addition, its sheer size ensures that only a handful of other companies even have a shot at competing. This is why companies like MetroPCS and Leap Wireless were eventually sold, because they simply couldn't compete against the likes of Verizon and AT&T. Also, Verizon has the ability to bundle its services, much like AT&T, giving consumers many more content servicing options than most of its rivals.

Fourth, Warren Buffett loves dividend stocks, and Verizon is certainly going to oblige by keeping its shareholders happy. In September, Verizon's board approved a nearly 4% boost to its quarterly payout, marking the eighth straight year that Verizon has lifted its annual payout. Currently yielding 4.6%, Verizon shareholders and Buffett are receiving more than double the average yield of the S&P 500. Best of all, these dividends can be reinvested in the stock, yielding even bigger gains in the future. 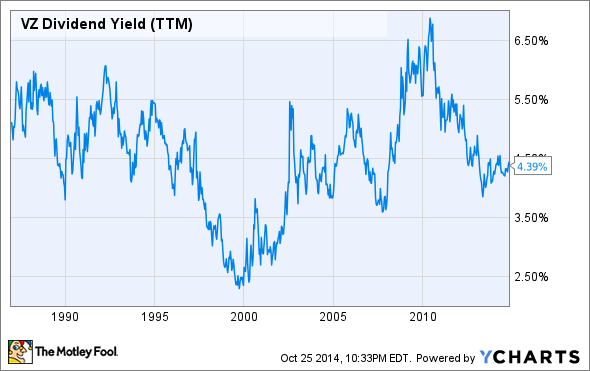 Finally, you have to consider the nature of the wireless business. Buffett has to be impressed with the fact that Verizon and its peers can lock customers into contracts for two years and secure a steady stream of predictable revenue. Even more so, Buffett has to love the fact that Verizon Wireless' churn rate (a measure of the amount of customers who leave Verizon versus its subscriber base) was just 1% on the dot in the third quarter, as service revenue increased nearly 5%. Having purchased its remaining un-owned stake in Verizon Wireless from Vodafone Group (NASDAQ:VOD), Verizon is free to bask in the incredible free cash flow associated with more than 100 million customers.

What could hold Verizon back
Of course, even the great Warren Buffett has a bad buy every now and then. All we have to do is look toward Tesco for evidence of this. With that being said, let's have a look at a few of the headwinds Verizon is facing that could derail its stock.

Probably the biggest threat Verizon faces comes from AT&T. As I mentioned above, Verizon has superior 4G LTE coverage compared to AT&T, but AT&T also has the capital to quickly catch up to Verizon in terms of next-generation wireless coverage. Even more importantly, according to Brand Keys, AT&T was deemed to have the most loyal wireless customers. To be clear, Verizon Wireless' 1% churn rate is phenomenally good, but when it comes to customer satisfaction, AT&T Wireless continues to take the cake.

Also, debt has to be another concern that sticks in the back of all investors' minds. The purchase of its un-owned stake of Verizon Wireless from Vodafone put Verizon in a deep debt hole. At the moment, the company is sporting $109.2 billion in debt, and more than $101 billion in net debt. Obviously, Verizon Wireless is going to allow the company to generate more free cash flow than it was previously, but that's still a disconcertingly high amount of debt to carry around.

Is Verizon still a buy?
Now, back to our original question: Can this Warren Buffett stock head higher?

I believe Verizon does have the tools to head higher over the long term, but I would certainly caution that its outlook over the coming years is heavily tied to its ability to pay down its debt.

There's little question that its 100% ownership in Verizon Wireless is going to be a positive, as is its historically low churn rate. However, I also feel that as Verizon's PEG ratio approaches two, investors are going to be less willing to push its stock even higher. Income-seeking investors should do just fine with Verizon, but I'd temper your share price appreciation expectations to very modest gains at best.