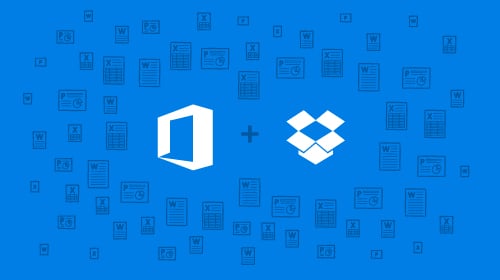 Software giant Microsoft (NASDAQ:MSFT) dropped a bit of a bombshell yesterday. The company announced a surprise partnership with Dropbox, the immensely popular cloud storage and file sharing service. The partnership is something of a departure for both companies, but it's also a win-win for the pair.

Together at last
Microsoft and Dropbox will integrate features and services between their apps to facilitate higher levels of collaboration. Office apps, including mobile and Web, will be able to access Office files stored directly in a user's Dropbox, while users will also now be able to edit Office files directly from Dropbox and sync them across devices. Office apps will also integrate Dropbox's sharing functionalities.

Within "the next few weeks," Microsoft's mobile Office apps for Apple iOS and Google Android will be updated with the new features, while integrating features into the Web apps will arrive in the first half of 2015. Dropbox has also agreed to launch its mobile apps on Windows Phone and Windows tablet platforms.

The partnership makes sense on numerous levels, as Microsoft says Dropbox currently stores over 35 billion Office files. Meanwhile, Dropbox continues to grow its presence in the enterprise segment with Dropbox for Business, which is currently used by over 80,000 companies. Earlier this year, Dropbox announced Project Harmony, which adds several collaborative features, like seeing when colleagues are accessing an Office file, among others.

If you can't beat them, partner with them
While Microsoft has been aggressively pushing its own competing OneDrive service, announcing just last week that Office 365 subscribers now receive unlimited storage at no additional cost. In doing so, Microsoft hopes to put pressure on all of its cloud storage rivals, including Amazon.com, Google, Apple, and Box, among others.

But at the same time, cloud storage is proving to be a stickier platform than you might expect. Intuitively, you might think switching is simply a matter of moving all your files over. However, Dropbox in particular has been very successful at creating a platform out of cloud storage, integrating with many third-party apps and services for syncing data.

If Microsoft can't tempt users to switch to OneDrive altogether, the next best thing is to partner. After all, cloud storage isn't Microsoft's core business, so any strategy that expands Office's reach is smart, even if it entails implicitly endorsing a rival service.

It's worth noting that Microsoft also partnered with Box last year, another cloud storage start-up. That partnership was even more interesting considering Box CEO Aaron Levie's propensity to poke fun at Microsoft.

Dropbox CEO Drew Houston noted that this type of partnership is "pretty unusual" for both companies, but that shouldn't undermine the mutually beneficial nature of the union.