It's like Garanimals for diners who get to pick and choose their ingredients. Image: McDonalds Operator's Association of Southern California

McDonald's (NYSE:MCD) menu hasn't kept pace with industry changes, the burger chain admits, and in a bid to stop the dramatic slide in its business, it is giving managers more leeway in choosing items that better reflect local tastes while allowing for greater customer personalization of their sandwiches.

Will a new menu make you eat at McDonald's again? Probably not, if you're like millions of other Americans who are swearing off fast food, but the restaurant operator feels if the menu has more relevance to its customer's preferences it may staunch the worst of the hemorrhaging occurring from the flight to fast-casual dining chains.

The reorganization under way hardly seems worth the effort.

Last week McDonald's reported third quarter sales as restaurants opened for at least a year tumbled 3.3%, more than double the decline witnessed in the second quarter and the fourth straight period in which comps fell. They were down more than 4% in September alone and the quarter represented one of the worst periods for profits in its history, with per-share earnings sliding 28% from the year ago period. 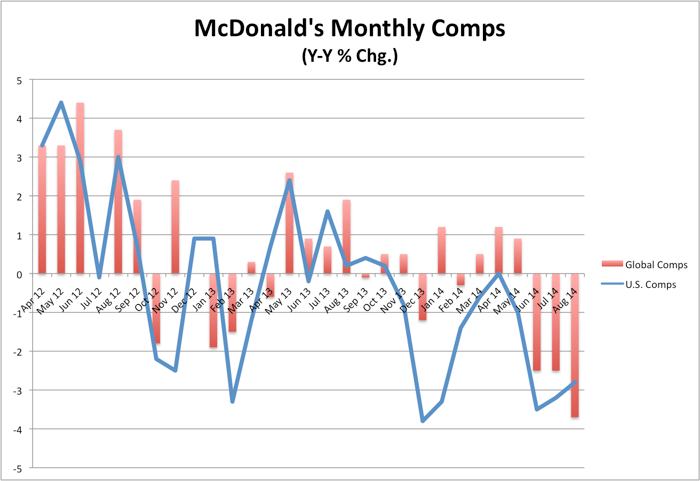 Previously McDonald's divvied up the country into three regions: east, central, and west. So even though a Chorizo burrito may not play as well in Wisconsin as it might elsewhere, restaurants there still got the item based on when it was introduced into the zone.

Now it's carving the country up into four divisions -- northeast, south, central, and west -- to better reflect regional tastes, while at the same time giving the customer more opportunities for personalization through its "Create Your Taste" platform. Just like at a fast-casual restaurants, customers will be able to customize every aspect of their sandwich.

The new McDonald's build-your-own menu is in response to changing consumer preferences who are opting for healthier, fresher fare found at fast-casual operators like Chipotle Mexican Grill (NYSE:CMG), which saw its own same store sales numbers soar 20% in the latest period. 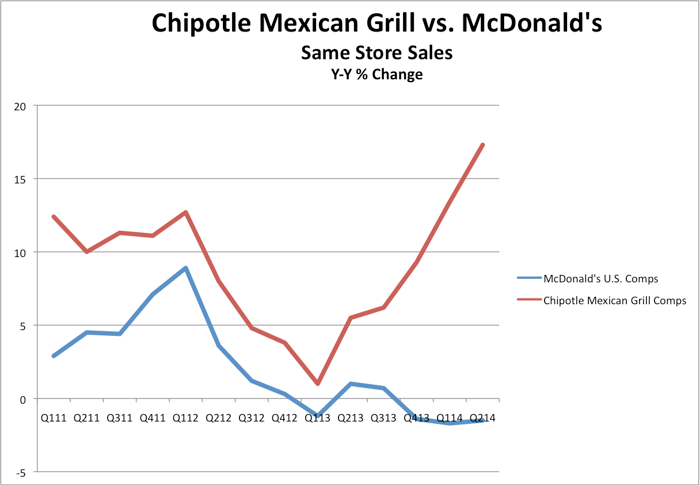 Choosing your topping won't be enough to change the widening gap between these two restaurants. Data: Company quarterly SEC filings

The new McDonald's menu gives customers a broader selection of fresh ingredients, including a choice of buns (or no bun at all) and a wider assortment of toppings than what you'd typically find. Along with tomatoes, lettuce, and bacon, you'll also have a choice of eggs, grilled mushrooms, jalapeno peppers, or tortilla chips. In short, the Chipotle or Potbelly experience at the Golden Arches.

Each region will get its own president and will have the ability to suggest its own promotions and programs that represents the cultural diversity of each zone, which, McDonald's says, builds on the success of similar efforts in the UK, Canada, and Australia, and marks an effort by the restaurant operator to more fully engage its customers.

But fast food is stuck in a rut. Traffic at quick-serve restaurants was down 1% in the year ending in June, according to the market analysts at NPD Group, a slide that McDonald's has magnified by being unable to post a single month of positive same store sales since last November.

It's a secular decline across quick-serve establishments. Burger King Worldwide (NYSE:BKW.DL), for example, reported a meager 0.9% rise in second quarter comps, which was barely better than the 0.6% increase a year ago, but worse than the 2% rise it enjoyed in the first quarter. Dunkin Brands (NASDAQ:DNKN) said it will be a challenge for the donut shop to make even the low end of its full-year same store sales guidance.

In short, McDonald's has more problems than whether sweet tea shows up in Louisiana at the same time as it does in Minnesota, or if you can have a Brioche bun instead of a sesame seed one. It's got new competition in the breakfast daypart from Yum!' Brands Taco Bell division and White Castle; it's being pressured on coffee and baked goods sales from Dunkin' Donuts and Starbucks; and it has to contend with a consumer no longer in love with greasy fries and burgers.

Giving them the choice of whether to put mushrooms on a burger isn't going to change that.

Sure, it's about time McDonald's menu reflected the changes under way in the industry, and perhaps it should have been done years ago, Burger King, after all, pioneered having your burger your way. And at least McDonald's still pays investors a tasty dividend as they wait around to see whether the new changes taking place will gain traction. But the latest efforts seem little more than rearranging the deck chairs on the Titanic, and I think investors will end up getting that sinking feeling.