Palo Alto Networks (NYSE:PANW) is one of the most interesting names in the tech sector, but the decision over buying or selling the stock isn't as easy as you might think. Investors often buy or sell stocks based on their relative valuation within their peer group, but with the network security sector it isn't quite so easy. Why is this so? Furthermore, is Palo Alto Networks a buy or sell?

You say value, I say growth
It's tricky to compare valuations in the network security sector, because the leading players are at different stages of their development, and this makes them attractive to a different type of investor. For example, a value investor might look at a mature, highly cash generative, stock like Check Point Software (NASDAQ:CHKP) at conclude that it's the best in class. Meanwhile, growth at reasonable price,or GARP, investor will like the look of Fortinet's (NASDAQ:FTNT) mix of mid-teens revenue growth and solid free-cash flow generation, while a growth investor will favor Palo Alto's 30% plus growth rates, even if its free-cash flow yield is low.

I'm going to graphically introduce some of these ideas for you, and then get into the numbers. First, a quick look at revenue growth for these three companies in the last four years and the analyst forecast for the fifth year, reveals that they really are at different stages of development. 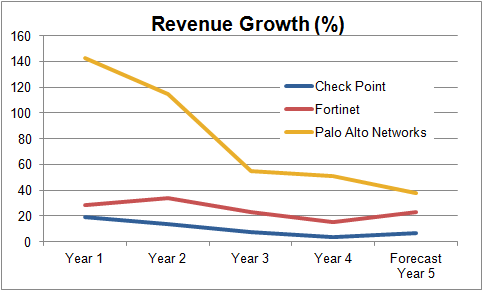 Moreover, for argument's sake I have merged their revenue growth rates together in one continuous chart, so readers can imagine these three as being one continuous company. 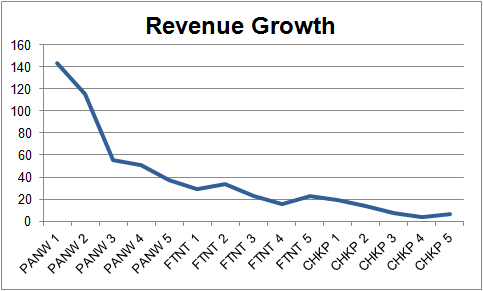 Of course, there is no reason for Palo Alto's or Fortinet's growth rates to follow the trajectory in the graph, but it's a useful exercise in understanding the concept outlined above.

Free-cash flow is important, because it's what the company actually has to distribute to shareholders via buybacks and dividends, to pay off debt and to make acquisitions.

However, the following graph of the last five years reveals that Palo Alto's free-cash flow generation as a percentage of sales is currently on a par with Fortinet's. 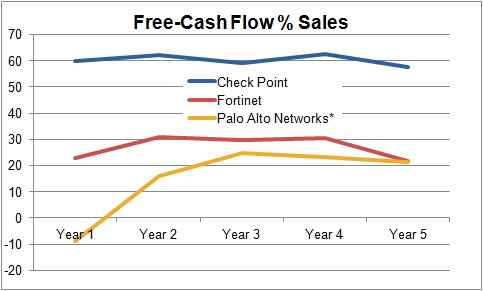 Source: Morningstar Research, *Palo Alto figures include an adjustment for a $75 million payment to Juniper Networks

The conclusion of the chart above is that Palo Alto should trade on a higher multiple of sales than Fortinet does, because they are generating similar amounts of free-cash flow from sales and Palo Alto has a much higher revenue growth rate.

Palo Alto Networks, Check Point Software and Fortinet: Which is better value?
The discussion above should lead to an appreciation that a company's free-cash flow generation will vary depending on where it is in its cycle. In addition, the price that investors are willing to pay for the current free-cash flow should vary too. In other words, there is no point taking a snapshot of these three companies and comparing their valuations on a like-for-like basis.

With that said, here is a table of some current valuations. All the current year metrics are on a trailing four-quarter basis. The sales estimates for next year are analyst forecasts, and free-cash flow conversion rates are the author's assumptions. Enterprise Value, or EV, is simply current market cap plus net debt.

Again, it's clear that comparing the three on a like-for-like basis is not a sound approach. Moreover, the assumptions in the table—especially for Fortinet and Palo Alto—regarding free-cash flow conversion are conservative. For example, as companies grow they are likely to generate economies of scale and find ways to increase free-cash flow conversion.

The bottom line
With that said, there is a case for all three stocks being a good long-term value! Check Point Software is forecast to generate a lot of free-cash flow in future years and the FCF/EV ratio forecast of 7.4% is significantly above the 2.3% that the US 10 Year Treasury note is yield. Meanwhile, Fortinet's valuation is arguably a good value for its mid-teens revenue growth rates, and even Palo Alto 's FCF/EV ratio next year looks like it could be close to the what 10 Year Treasury yield is right now.