Not everyone believes the Internet of Things will transform our lives for the good.

The Internet of Things could save companies billions in efficiencies and transform how people communicate with the world around them. But some are skeptical of the Internet of Things' (IoT) cost-savings claims; they believe threatened privacy and posed security problems will be a huge part of the IoT.

It wouldn't be prudent, as investors, not to consider the hurdles and risks of any potential investment, so let's consider for a moment the bear case for the Internet of Things. 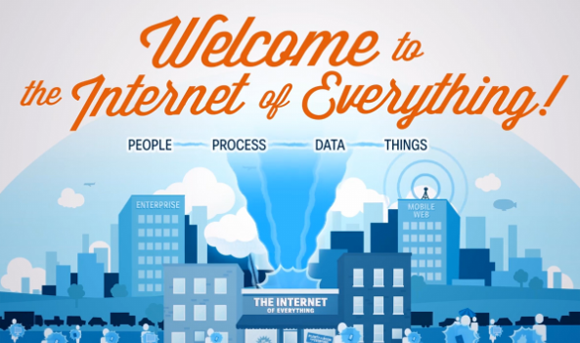 Cisco has an optimistic view of the IoT, but not everyone is convinced. Source: Cisco.

"The Internet of Things has been in the red zone of the hypometer for over a decade now. Yes, there will be many niche applications, but it will not be the next big thing, as many pundits predict. If the Internet of Things had any true validity, you would think you would start to see evidence of its presence on early adopter Internet networks," Bill St. Arnaud, a self-employed green Internet consultant, said.

He's not the only one, either. "If my bathroom scale tells my smartphone how much I weigh, that is handy, but hardly life-changing. There are tremendous upsides of networked devices for special-purpose roles, but in my humble opinion, not for benefiting everyday life in a revolutionary way," Karl Fogel, partner at Open Tech Strategies and president at QuestionCopyright.org, said in the survey.

But let's say these IoT doubters are wrong, and the Internet of Things reaches its highest potential. It may change our lives in ways we don't want.

Privacy as an afterthought
The IoT will bring an unprecedented amount of small sensors and tracking capabilities into our lives -- at a level we can hardly comprehend right now.

In the same Pew survey, respondents tackled the privacy issue. "There will be absolutely no privacy, not even in the jungle, away from civilization. I don't like this, but people have shown over and over again that they are willing to trade away their souls for a '$1 off' coupon," Nick Wredenn of the University of Technology Malaysia said.

That may sound a bit drastic, but some were even less optimistic. "The effects will be widespread but pernicious. We might as well inject ourselves into the Internet of Things. By 2025, we will have long ago given up our privacy. The Internet of Things will demand -- and we will give willingly -- our souls," Peter R. Jacoby, a college professor, wrote.

Let's assume for a moment our souls stay intact in an Internet of Things future. Even then, there are plenty of people who might benefit from IoT in all the wrong ways.

The Internet of unsecured things
The rapid growth of connected things (homes, cars, industrial equipment, etc.) has lead to some of those connections being much less secured than they should be. A few months ago, HP released data showing that seven of the top 10 most popular connected home devices were vulnerable to hacking.

In an interview with the Harvard Business Review back in April, cryptographer and security expert Bruce Schneier said the Internet of Things will be harder to secure than websites:

These are devices that are made cheaply with very low margins, and the companies that make them don't have the expertise to secure them.

Even Cisco, which is one of the biggest Internet of Things proponents, acknowledges security concerns are a real threat to the IoT. "It is also, unfortunately, too easy to imagine how these world-changing developments could go terribly wrong when attacked or corrupted by bad actors," Cisco's senior VP of security business, Christopher Young, said.

Intel (INTC -0.86%) believes security is a major concern as well. "Security needs to be built in as the foundation of the Internet of Things. Any disruption to these IP connected devices can cause damage to the business and our daily lives," Intel's worldwide chief technology officer for security, Michael Fey, said earlier this year.

Autonomous and semi-autonomous vehicles need to be protected from hacking. Source: NHTSA.

Transportation is one of the biggest IoT security concerns. Back in 2010, a group of researchers from the University of California San Diego and the University of Washington hacked a car's electronics system and gained complete control of the engine, braking system, traction control and transmission. While the car was driving, they could disable the brakes and turn the engine on and off at will. Considering semi-autonomous vehicles are already on the road, and autonomous ones are coming, this isn't a comforting thought.

Enough with the doom and gloom
I don't write all of this to dissuade investors from investing in the Internet of Things -- but rather to present the other side of the coin. Technology can sometimes over-promise and under-deliver, and (as the NSA proved over the past few years) it can certainly be used against people in ways we never expected.

But the Internet of Things is already transforming industries and making the world better. So, even if a few skeptics turn out to be right, it's unlikely they'll all be saying "I told you so" a decade from now.