Apple (NASDAQ:AAPL) stock touched a new all-time high this week, reaching $114 on Friday. Before Apple's seven-to-one stock split earlier this year, that would have been about $800. While $800 is well above the company's 2012 high of a presplit $705 achieved just before the stock tumbled more than 35% lower in the next 12 months, it wasn't until this week that Apple surpassed it's all-time high for its market capitalization. Here's what investors need to know about the world's most valuable company at new highs and whether the stock is still a buy.

To get a better look at how much leverage Apple created by repurchasing shares, here is a closer look of the progress of Apple's market capitalization compared to its share price appreciation in the last several years. In September 2012, when Apple stock reached $705, or a postsplit $100.71, the company hit a record market cap of $658 billion. While the stock surpassed $100.71 in August, it wasn't until Thursday, when the stock reached $114, that Apple's market cap hit a new record. Apple stock finished the week well ahead of its previous market cap record, exceeding $667 billion.

Or, put another way, while Apple stock at $114 is 13% higher than the last time its market cap reached an all-time high in September 2012, its market capitalization is up only 1.4%.

How Apple is putting cash to work for shareholders
How is it that Apple's stock price has grown so much faster than its market capitalization? The "magic" lies in the company's aggressive share repurchase program, an effort that has turned out to be a significant boon for the stock.

The significant gain Apple shares have made compared to the company's smaller rise in market capitalization truly is a great achievement. This is what happens when a cash cow like Apple repurchases lots of shares at a great price. Investors shouldn't underestimate the value of these efforts. Apple's share repurchase program has been the company's single largest contributor to growing intrinsic value for shareholders in the past several years.

While this may seem like magic, it's not. It was simply made possible because Apple bought back more than 10% of its shares outstanding, increasing the intrinsic value of Apple on a per share basis. With less shares spread out over the same company, each share gets an incrementally larger piece of Apple ownership. 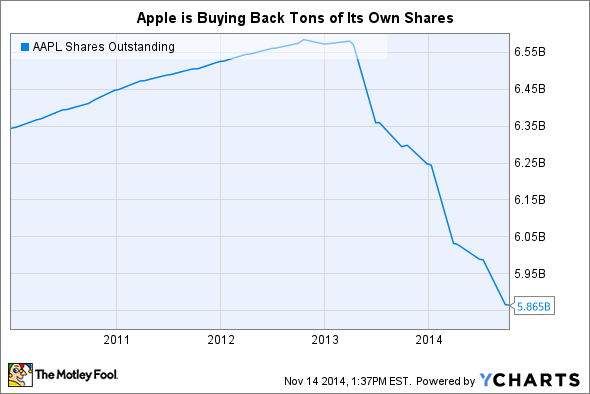 "Great. Apple stock is up more than its market cap thanks to a well-executed share repurchase program. But now that Apple is at an all-time high market cap, is there upside left?"

Not only does Apple stock still trade fairly conservatively in relation to the company's prospects, but there is still lots of cash left to be spent on repurchases. The company has spent less than $70 billion on share repurchases and has authorized more than $20 billion more to spend before the end of calendar 2015. And Apple's cash hoard is still monstrous; not only is the company sitting on $155.2 billion in cash and marketable securities, but it's also raking in $50 billion in free cash flow on an annual basis.

Sure, share repurchases won't have as large as an impact in the future since Apple likely won't be able to buy back shares at the bargain levels it had the opportunity to buy its own stock in 2013, but shares still trade conservatively enough where repurchases should make a positive impact for shareholders.

In light of Apple's growing revenue, massive cash flow, a record of excellent capital allocation choices, and a plan to continue to build shareholder value through repurchases, the stock still looks like a good bet for investors.