Anyone who orders a drink in a restaurant knows that it's a bad business transaction. You pay a much higher price per serving of beer, wine, or cocktail than if you had purchased it from your local liquor store.

In some cases, when you factor in that restaurants buy alcohol for lower wholesale prices than you do as an individual customer, it only takes selling a couple of glasses of wine or mixed drinks -- sometimes just one --  for an eatery to be in the black.

That, of course, has made beer, wine, and cocktail sales a huge profit center for restaurants; but exactly how do they decide how much to mark up your drink?

In general, the industry standard is that the cost of the drink for the establishment should be between 20% and 30% of the price it charges a customer. That means if Buffalo Wild Wings (NASDAQ:BWLD) pays $1 for a single, 12-ounce serving of beer, then it should charge patrons between $3.33 and $5 for that drink.

According to a blog by Foodservice Warehouse, a restaurant industry publication:

Learning how to price alcoholic beverages in your bar or restaurant involves finding a calculated balance between profit and customer satisfaction. On one hand, you want to gain the most profit for your business, but on the other, you need to retain value for the customer's dollar. This balance includes many factors including beverage cost and overhead.

In a broad sense, how much you pay for your drink depends upon the market you're in, the competition, and the type of establishment you're patronizing. A dive bar and a fancy steakhouse will both likely have Molson Coors Brewing Company's (NYSE:TAP) Coors Light on tap, but the high-end place could charge double, if not triple, for the same drink.

If the 20%-30% rule was a law rather than a suggested guideline, you would pay a lot less in many cases. 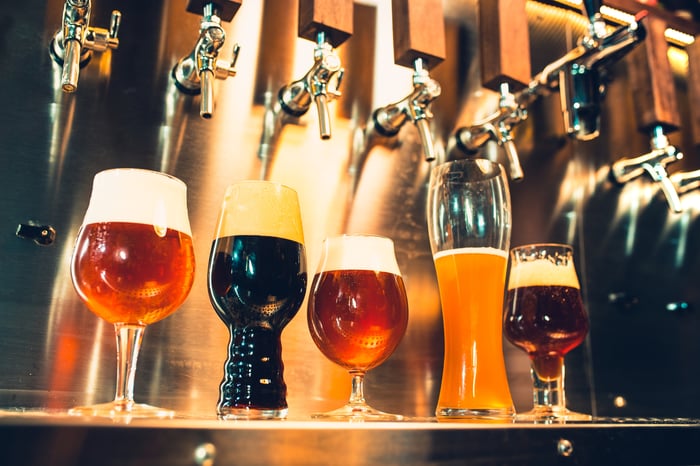 A bar can be a potential danger zone for your wallet. Image source: Getty Images.

In addition to 20%-30% only being a guideline, there are also variants between what type of alcohol you are drinking. Will Gordon, a writer for Deadspin, broke down the cost of beer, wine, and liquor based on research done at a medium-sized neighborhood bar in Boston.

He found that bottled, domestic beer -- Budweiser, in this case -- was the best deal for the customer. He wrote: "This is fine by the bar, because a bottle of beer is the easiest thing to serve. It comes in its own container and requires no mixers or garnishes, and it takes the bartender five seconds to complete the transaction."

Draft beer, he found, favors the bar a little bit more, but the real moneymakers are wine and liquor. On low-end wine, generally, the goal is for the first glass in the bottle to recoup what the bar paid. When you move to fancy wines, however, the numbers get astronomical, even if the markup percentage drops. As a patron, you technically get a better value paying $800 for a $400 bottle of wine; but that will be cold comfort if you can't tell the difference between it and the $5 bottle marked up to $40.

The same logic applies to liquor, which is generally the worst deal for consumers, with bottom-shelf options being cheaper, but more profitable on a percentage basis for the bar.

Where does alcohol stack up?

As hard as it can be to throw down $12 for a gin and tonic -- which is what I paid at dinner in a semi-upscale Connecticut restaurant last weekend -- the markup on your drink is not the highest one you pay in a restaurant. Restaurant.com detailed a number of them in its article, "The Top Ten Biggest Restaurant Markups."

Beverages are three of the 10, but bottled water, soda, and tea all have dramatically higher markups then beer, wine, and liquor. Some food products are also a better deal for restaurants. Potatoes, for example, can be marked up by a multiple of 100%, and pizza, the website wrote, has a 6%-800% markup.

The difference is that soda, water, and tea are still only a few dollars, so even a few of them won't dent your wallet too much. A pizza or order of fries may cost a similar amount to a cocktail or a beer, respectively, but you're unlikely to overdo it and order half a dozen pizzas.

The best bet for consumers is clearly drinking at home or packing a flask; but that may not be practical (or legal). If you're looking to keep your tab low, beer and low-end wine may be the way to go. If you want value on a percentage basis, high-end wine or spirits would usually be a better choice, though you'll end up spending more for them.

No matter what you're drinking, you're paying for the privilege of doing it in a bar or restaurant. It's possible to find better deals or to get truly hosed; but no matter what you drink, the establishment wins.