Europe is key for Orexigen's Contrave. Shares jumped despite problems with the U.S. launch.

The launch of Orexigen Therapeutics' (NASDAQ: OREX) obesity drug Contrave isn't off to the best start. As Chief Commercial Officer Mark Booth put it during the company's latest conference call:

Unfortunately, like many new tactics, there have been some glitches. There have been unforeseen technical difficulties that have resulted in delays in processing the volume of incoming prescriptions. These delays are due in part to website registration issues that's surfaced in the first week of launch, requiring calls to be directed to a support center that wasn't sized to handle the resulting volume of calls. In short, these delays are unacceptable and are impacting customer experience.

Based on that quote, you'd expect the drugmaker to have been down on Nov. 10 after the third-quarter conference call. Instead, the stock rose 33% on the day and ended last week almost double from where it was the Friday before.

Why? After the lackluster launches of two other weight-loss drugs, VIVUS' (VVUS) Qsymia and Eisai and Arena Pharmaceuticals' (ARNA) Belviq, investors have tempered their expectations for the launch in the U.S. by Orexigen's marketing partner Takeda. Orexigen's value started the week well below the high set after final phase 3 data for Contrave were released last November. 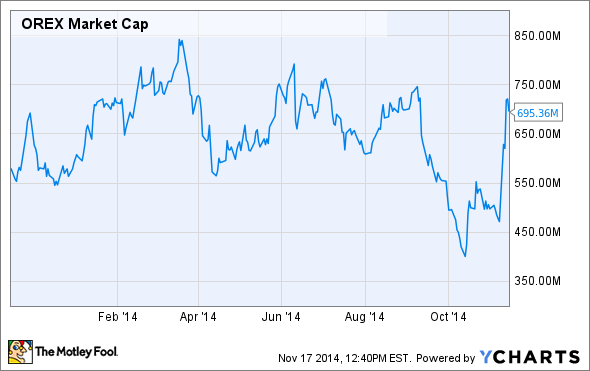 While expectations might be low for the U.S. launch, investors appear to like the idea that the drug might be close to gaining approval in Europe. Preston Klassen, Orexigen's senior vice president of development, had this to say during the conference call:

While Contrave was on the agenda for a possible oral explanation in front of the full CHMP committee, we learned that would not be a need for this oral hearing. Instead, we discuss the remaining issues with our repertoires, and then after this interaction, we received the revised and final List of Issues. Importantly, there were no major objections in this final LOI.

Orexigen will submit responses to the List of Issues and should hear an answer from the EU's Committee for Medicinal Products for Human Use, or CHMP. It sure sounds like an approval is likely. At the Credit Suisse Healthcare Conference late last week, Orexigen President and CEO Michael Narachi said that the company was "confident" that Contrave would receive a positive opinion at the December CHMP meeting, which likely explains the continued upswing in the stock price.

A positive opinion from CHMP is essentially an approval in Europe. The last step is for the European Medicines Agency to adopt the recommendation a few months later, but that's essentially a rubber stamp.

Europe is usually an afterthought for drugmakers because drug prices tend to be lower across the pond than in the U.S. But Qsymia and Belviq aren't approved in Europe, giving Orexigen and Takeda a chance to have the first-and-only drug rather than third.

More important, sales in Europe could be easier to come by than in the U.S. Phentermine, a generic weight-loss drug available in the U.S., isn't approved in Europe, so there's an even greater need for some kind of treatment.

Also, gaining insurance coverage could be easier in Europe. There are substantial long-term benefits of losing weight, but that requires paying for obesity drugs now to avoid treatments for heart problems and diabetes later. It's hard for U.S. insurers to justify covering the drugs or offering a low co-pay because the insurer might not see the benefits if the patient changes insurance. In Europe, the one-payer systems know they'll see the long-term benefits, so it's easier to justify covering the drugs.

Brian Orelli and The Motley Fool have no position in any of the stocks mentioned. Try any of our Foolish newsletter services free for 30 days. We Fools may not all hold the same opinions, but we all believe that considering a diverse range of insights makes us better investors. The Motley Fool has a disclosure policy.