This week the American Customer Satisfaction Index released its annual survey of banks. The results, not surprisingly, featured a Who's Who of megabanks ... at the bottom of the rankings. The survey also found that credit unions remain the top dog in terms of customer satisfaction.

And the worst? Bank of America (NYSE: BAC).

But should investors be worried about the abysmal customer satisfaction numbers reported in this survey (or any other survey, for that matter)? Could this indicate that customers will be moving their accounts en masse to credit unions?

First off, how'd the market react?
Bank of America's stock reacted to the Tuesday press release by .... well, by basically doing nothing. The stock closed about a nickel higher on the day. 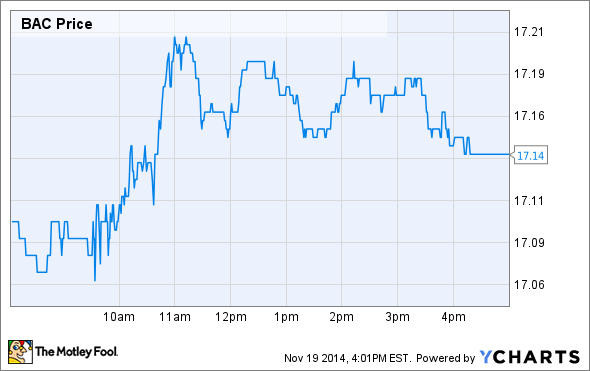 Wells Fargo's stock reacted in much the same way, moving down a scant 0.3%.

But just because the market failed to react to the news doesn't necessarily mean the market is right. The survey could still be an early indication of a long-term threat to bank investors.

After all, it's logical that if consumers are highly unsatisfied with the products or services provided by a business, those consumers are likely to change to a different provider.

Don't like your iPhone? Get an Android. Don't like the taste of Pepsi? Switch to Coke. Other surveys have indicated that upwards of two-thirds of bank customers would switch banks for better service! It makes perfect sense.

Will this matter for bank investors?
The problem with that logic is that people are much less likely to switch their bank accounts than they are to buy another brand of soft drink. And despite what consumers may say in surveys, in general people don't change from one bank to another very often.

Switching from one bank to another means moving multiple accounts. It may mean cashing in a brokerage account (ahem, tax consequences). It means spending all that effort to re-create your online bill-pay account. And it means switching your direct deposit at the office. Making all this work is neither a smooth nor fun process. It's just easier to stick with the status quo.

That stickiness is the reason that despite poor customer satisfaction year after year, Bank of America, Wells Fargo, and other big banks continue to grow their businesses. Bank of America increased its deposit base by over $23 billion from the second quarter to the third quarter of this year just in its Consumer and Business Banking division. That's a huge amount of deposit growth for just one quarter, especially at a bank that consumers supposedly hate.

Further proving the point, these surveys have consistently shown poor performance for the big banks over the past several years. Bank of America and Wells Fargo's index scores are both statistically equal from 2013 to 2014. Yet both companies' stocks have done pretty well relative to the rest of the market. 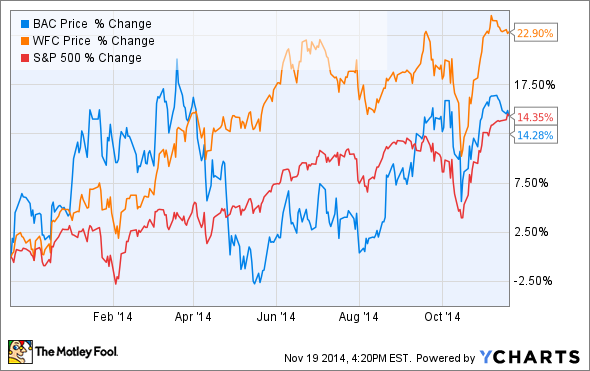 You're probably asking "But why?"
For investors, Bank of America and Wells Fargo stock is purchased in the hopes that the companies will increase profits in the future. That means increasing revenues, managing expenses, and prudently guiding the banks through the various economic cycles.

That also means working hard to minimize the interest paid to depositors (don't forget, that is an expense from the bank's perspective). It means finding new ways to add value to the consumer and then charging fees for that service. For investors, increasing fees increases revenues, and that's definitely a desirable outcome.

Credit unions, on the other hand, don't operate that way; credit union members are both customer and owner. That's why credit unions charge less for fees and pay out higher interest rates on deposits. There's not the tension between growing profits for shareholders and being generous with consumers; they're the same people!

Understanding this, we can dig a level deeper into the survey and find the real root of the tension. The two top complaints from consumers with respect to banks like Bank of America or Wells Fargo are too little interest paid on deposits and too much cash charged in fees.

Banks, unlike credit unions, can't optimize their products at the expense of profits. For investors, that's a good thing. Those profits are the reason you're investing in the bank to begin with. The challenge for management, then, is to walk the fine line between maximizing profit without going too far and alienating the customers.

Based on the past few years of customer service surveys and the financial results from these banks, management seems to be effectively walking that line.

Believe It or Not, This Bank Has the Worst Reputation @themotleyfool #stocks $BAC $WFC $AAPL $KO $PEP Next Article
Current