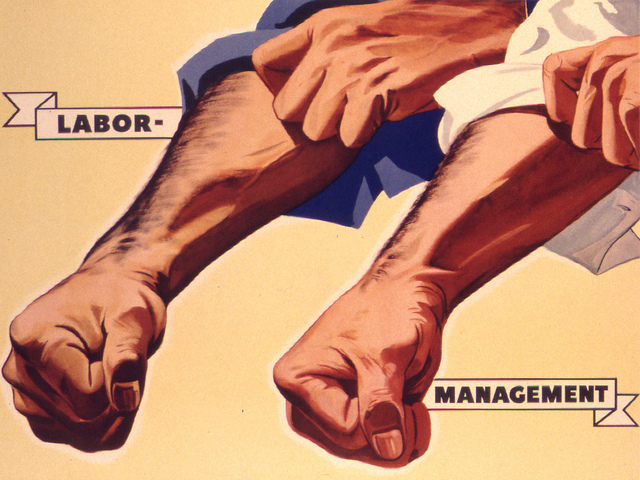 I've long supported unions. I've even belonged to two -- when I was a high school teacher and when I was a university administrative worker. But over the years, I've occasionally doubted my pro-union convictions. Permit me to share some of my thoughts and then to solicit yours. I suspect that many who read this article are much more informed about and experienced with unions than I am.

Even today, unions have a strong impact. According to the Bureau of Labor Statistics, union members in 2013 had median weekly earnings of $950 (that's $49,400 per year), while non-union workers had median weekly earnings of only $750 ($39,000). That's a 27% higher income for union workers. And unions have helped push through legislation in recent years, too -- for example, they supported the Affordable Care Act.

Why unions are problematic
As much as I'd rather not accept it, while unions have done a lot of good and have helped workers avoid exploitation, they can also help workers exploit employers sometimes. Perhaps it has been a gradual shift over time as unions slowly accumulated more and more power -- though the percentage of American union workers dropped from a high of 35% in 1954 to a 97-year low of 11% in 2013.

Unions can have the power to impede a company's ability to compete and thrive. A firm might be in desperate trouble, yet its unions may be unwilling to bend or compromise in order to help the company survive. Many employers find themselves left very inflexible when they have union contracts to abide by. Meanwhile, if a union negotiates high wages for workers at a company, it may lead the company to charge higher prices for its offerings, which can make it less competitive with rivals.

Some argue that unions have led to a decline in the value of merit. In many union settings, workers can't advance much or at all on their merits, but rather they must generally progress within the limits defined by union contracts (where advances might be based on seniority, for example). Employers may have trouble weeding out ineffective employees if they belong to unions. In theory, at least, unionized workers might become so comfortable and protected that they lose the incentive to work hard for their employer. And outstanding employees might lose their get-up-and-go if there's no incentive to excel -- or worse, if they're pressured by the union not to go the extra mile.

Still, it's worth pointing out some of the many, many successful American companies that have unions, such as Southwest Airlines, United Parcel Service, Caterpillar, Walt Disney, Verizon, Harley-Davidson, Ford Motor Company, and Boeing.

Is there a problem?
So there's both good and bad associated with unions. I suspect that most businesses -- and even many or most investors in said businesses -- would prefer that the businesses be union-free. But that's easier said than done. Many workers, meanwhile, are intent on keeping their unions, and they occasionally organize to form new ones. Just this year, football players at Northwestern University have been petitioning to form one. Meanwhile, domestic workers long denied by law the right to unionize have formed the National Domestic Workers Alliance and have been endorsed by existing unions. Workers at Wal-Mart, too, have been pursuing a union and have even conducted strikes.

With income inequality becoming a bigger problem in America and a more widely recognized one, there a case to be made that the American worker has more need than ever for a voice and for political and economic power.

Is ownership an answer?
One strategy for companies to prevent unions from taking too much control might be to ensure that their workers are as satisfied as possible. That sounds simple, but employee satisfaction can become mighty difficult to maintain as a company grows large. Another option is to convert employees into owners -- via stock ownership or profit-sharing, for example. If workers have a real stake in a firm's bottom line, they may be more sympathetic to management's point of view and more eager to work extra hard to help the firm succeed.

Meanwhile, some are trying to think outside the box and imagine alternative labor union models, such as the "Labor 3.0" project.

Questions remain
This brief foray into union considerations has left me with plenty of questions. For example:

I know that this brief article only covers the tip of the iceberg, but it's a fascinating iceberg. Share your perspective by leaving a comment below.