Earlier this month, I wrote about how JetBlue Airways Corporation (NASDAQ:JBLU) was virtually certain to announce big changes at its annual Investor Day meeting. In the past couple of years, it has become clear that JetBlue needs to take more drastic action to match or exceed its competitors' margins.

Sure enough, JetBlue announced a slew of profit growth initiatives on Wednesday. Together, these plans provide a clear pathway for JetBlue to increase its annual operating profit to more than $1 billion by 2020.

What we already knew

As discussed in my previous article, two margin-enhancing changes were already known to investors. The first was the introduction of fare families, which will provide customers a choice of "better," "even better," and "best" fare types.

The second "known" margin improvement driver is the introduction of larger and more cost-efficient A321 aircraft to JetBlue's fleet. About a year ago, JetBlue modified its aircraft orders to shift toward the A321.

It took another step in that direction this week. JetBlue deferred some of its aircraft orders from the 2016-2018 period to 2022 and 2023. It also converted another eight A320 orders to A321s. This means that all of JetBlue's orders between now and 2019 are for the larger A321.

In the past year or two, many analysts have been calling for JetBlue to add seats to its A320s in order to reduce unit costs. In its recent quarterly conference calls, JetBlue executives started to sound more open to this idea. At the Investor Day, JetBlue confirmed that it will eventually add 15 seats to each of its A320s, increasing the number of seats by 10%.

This will add some expenses (primarily the cost of a fourth flight attendant and depreciation on the retrofit costs), but the additional revenue will easily outweigh these costs. Most importantly, JetBlue still expects to offer the most legroom of any U.S. carrier despite reducing legroom somewhat.

These retrofits are expected to begin in Q3 2016 and finish up in 2018, so JetBlue won't get the benefits of this program for a while. However, by 2019, JetBlue expects these modifications to benefit pre-tax income by at least $100 million. (This figure seems very conservative -- the actual benefit could potentially be double that estimate.)

JetBlue will complete the roll-out of Mint in early 2015 (Photo: JetBlue)

JetBlue also clarified its expectations for other ongoing initiatives. By early 2015, JetBlue expects to complete the rollout of "Mint" premium service on its routes from New York to Los Angeles and San Francisco. In September, JetBlue achieved a 17 point margin improvement on its New York-Los Angeles route, and there is even more upside as JetBlue improves its revenue management techniques.

Meanwhile, JetBlue is partnering with other companies to sponsor free high-speed Wi-Fi access on its planes. It will also put ads on its Wi-Fi portal and could work with companies like Netflix to offer customers even more bandwidth to support streaming video.

JetBlue's operating profit is currently approaching $500 million, which is a company record. However, there is plenty of upside in the next 5-6 years. 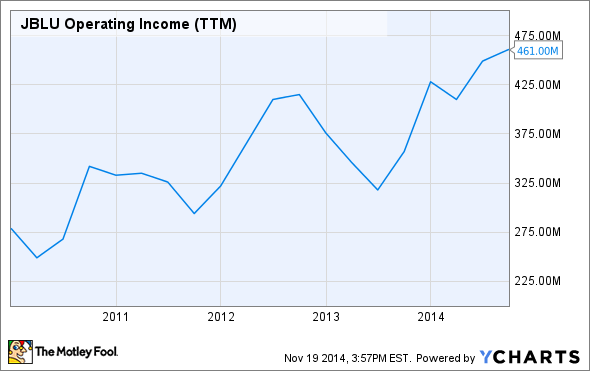 JetBlue has estimated the incremental profit contribution of the initiatives described this week at $450 million annually. That would be sufficient to roughly double JetBlue's operating profit to nearly $1 billion by 2020.

On top of this, JetBlue plans to continue its recent capacity growth rate for the foreseeable future. A 7% CAGR would increase JetBlue's capacity by 50% between 2014 and 2020, contributing to further earnings growth. Lastly, if the recent drop in jet fuel prices holds, JetBlue's annual fuel cost savings will total hundreds of millions of dollars.

Some of JetBlue's earnings tailwinds (particularly falling fuel prices) will benefit the company in 2015. Others will take several years to kick in. But all told, they create a clear pathway for JetBlue to double or even triple its operating profit to more than $1 billion by 2020. This will drive strong stock performance for long-term shareholders.