Pioneer Natural Resources' (NYSE:PXD) stock has sold off along with oil prices over the past few months. 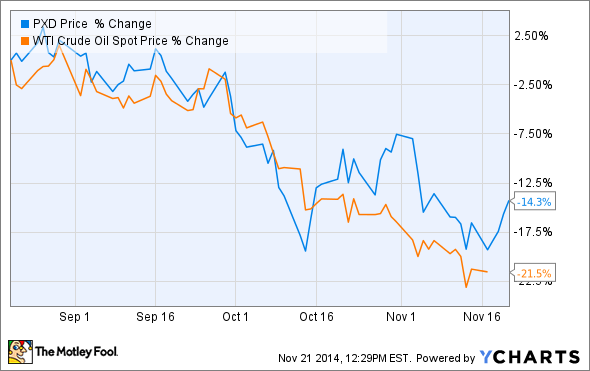 As that chart shows, Pioneer Natural Resources' stock has taken a 14% hit because of the nearly 22% sell-off we've seen in oil. Clearly, there is a pretty strong correlation between the two, which isn't surprising given that 69% of the company's production is oil and natural gas liquids. However, just because there is a strong correlation to oil prices doesn't mean the company needs higher oil prices for its stock to head higher. Here are three reasons the stock could head higher even if oil prices don't.

Pioneer Natural Resources can still make a lot of money even at lower oil prices. Not only is 85% of the company's production hedged through the end of next year, but its returns on new wells are still very strong. The company estimates that in a $70-$80 oil price environment, its returns will still be between 40% and 80% before tax.

Those are pretty strong returns, and very much in line with what others in the industry expect to see in this environment. This is because drillers have become very efficient in drilling new wells in order to maximize returns. Further, there is the potential for those returns to be even better as it assumes that drilling costs don't fall alongside the price of oil. However, there is a distinct possibility that drilling costs will fall given that other drillers are cutting spending and putting pressure on service companies to cut costs. This could provide even higher returns for Pioneer.

Spending now to save money later

Pioneer Natural Resources sees its well costs dropping further in the future as it's investing $1.4-$1.6 billion over the next two years on projects designed to make it more efficient. For example, the company is spending $500 million to $700 million on a field-wide water distribution network in the Midland Basin. The company estimates that the project will earn it a 35% internal rate of return before tax and save it about a half a million dollars per well drilled in the future.

On top of that, the company is investing to increase the capacity of its frac sand mine so that it can keep its costs down by having an ample supply of inexpensive sand. Lastly, Pioneer Natural Resources is investing to build new large-scale tank batteries and saltwater disposal facilities to optimize future development. This front-end loaded capital spending should keep its costs lower in the future as it can optimize field development to earn higher returns.

CEO Scott Sheffield said on the company's third-quarter conference call that Pioneer Natural Resources' "No. 1 priority is to get the export ban lifted next year in 2015." If he, and others in the industry, are successful in eliminating the ban on oil exports, it would help to ensure that oil prices in the U.S. won't drop too much farther in relation to global oil prices. As the following chart shows, the two oil benchmarks used to trade in tandem, but a gap between the two has developed in recent years. 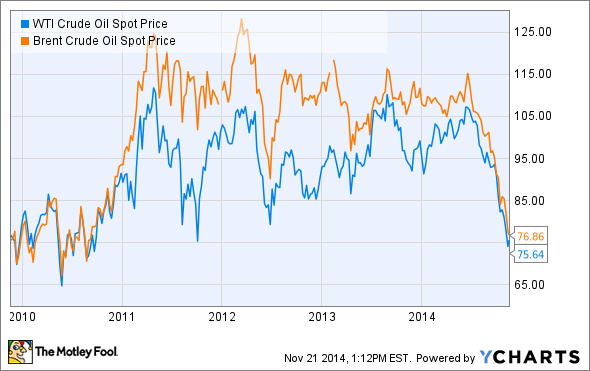 The gap has emerged because America is producing a lot of one particular variety of oil, light sweet crude, which at times is overwhelming both infrastructure and the refining system. This gap could widen even further in the future as America's capacity to refine this light oil is at its peak.

Where the upside comes in is that American producers like Pioneer Natural Resources wouldn't be constrained by American refining capacity if the export ban was lifted. Instead, American oil could trade freely on the global markets, which would eliminate any discount between the two. So, it would be possible for Pioneer Natural Resources to make more money on the oil it produces even if global oil prices don't move any higher.

Even with the weakness in oil prices, there's still the potential for Pioneer Natural Resources' stock to head higher in the future -- even if oil prices stay muted. The company's returns are still pretty strong in the current oil price range, and its returns should grow stronger over time as the investments it's making today reduce the future cost of wells. Further, the company's stock price could see upside from an end to America's oil export ban since it would raise the price Pioneer Natural Resources receives for the oil it produces here in the states. Needless to say, the stock doesn't need higher oil prices to fuel a return to its recent high.