Some would say they saw Seadrill Ltd's (NYSE:SDRL) dividend cut coming from a mile away. However, while the writing might have been on the wall, the writing that should have mattered more were the words penned by the company in its second-quarter earnings report. In that report, Seadrill wrote:

The Board has resolved to maintain the regular quarterly dividend at US$1.00 per share. The Board had communicated earlier that this dividend level is sustainable until at least the end of 2015. With the recent contract announcements and the solid execution on the financing side, the Board is pleased to report that we feel increasingly comfortable that this period can be extended well into 2016 without any significant recovery in the market.

Apparently, the company's comfort level changed in the last 90 days. It probably had something to do with this chart: 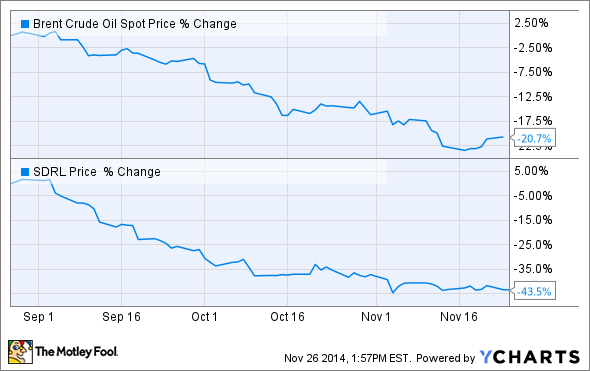 So, now investors are left with a new statement from the company as its third-quarter report spewed the words income investors hate to hear: "In light of the changes that have taken place since our last report, the Board has taken the decision to suspend dividend distributions for the time being." That one sentence caused the company's stock to plunge over 20% as investors ran away as quickly as they could.

For many, the income was a vital part of their retirement, which appeared to be safe at least until 2016. However, since that is now no longer the case, some investors might be seeking alternative options to replace Seadrill's income. While I personally won't be selling any of my shares, I do have three options for investors looking to replace some of their Seadrill income.

Sticking with the energy theme

For those investors seeking to replace Seadrill's income who aren't afraid to stick with energy stocks, there are a number of solid options. However, Kinder Morgan (NYSE:KMI) and LinnCo LLC (NASDAQ: LNCO) are the two I'd look at first.

Kinder Morgan might not provide a whole lot of income right now as its yield is currently 4.30%. However, the leading energy infrastructure company in America is planning to boost its dividend by 16% for 2015. Further, it expects its dividend will grow by 10% annually for at least the next five years. Over a longer period of time, a small investment in Kinder Morgan has the potential to deliver substantial income for investors.

Meanwhile, investors who need more income right now, and are willing to take on a higher level of risk, should take a look at the high-yield offered by LinnCo. Currently, the company's yield is a very generous 15.9%, which is paid in monthly installments. LinnCo is a bit unique as all of its income is derived from its ownership of units in LINN Energy LLC (OTC:LINEQ), which is a master limited partnership that owns oil and gas wells around the U.S. While oil and gas production might scream a dividend cut given the plunge in oil prices, that's less of a worry at LinnCo. This is because LINN hedges nearly all of its oil and gas production so that about 90% of its cash flow for the next two years is secure, as noted on the slide below. 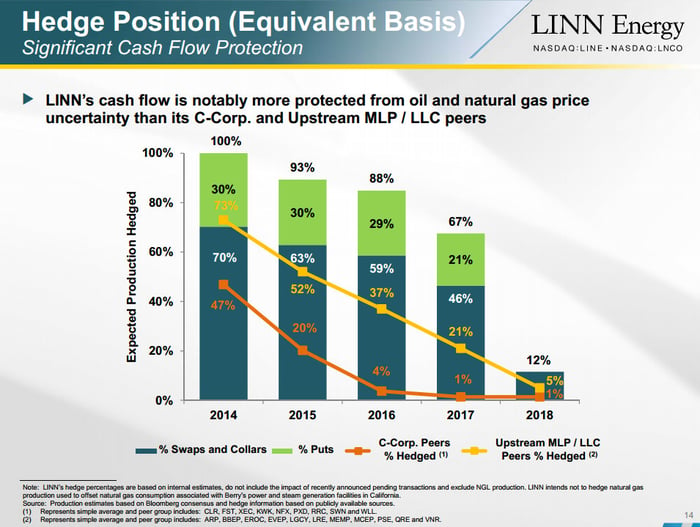 Now, I know Seadrill also has pretty secure cash flow for the next two years from its contract backlog, but it still cut its dividend. The key difference, here, is that LINN Energy doesn't have a major newbuild program it's trying to fund at a time when the offshore market was going haywire. As a result, it has more flexibility in maintaining its payout.

Moving beyond energy
The third company investors burned by Seadrill might want to consider is Brookfield Infrastructure Partners L.P. (NYSE:BIP). The partnership owns a variety of infrastructure assets around the globe including pipelines, ports, and power lines. However, it also offers income investors a compelling combination of a solid current yield of 4.60% that is backed by high-quality cash flow and very large margin of safety, as noted on the following slide. 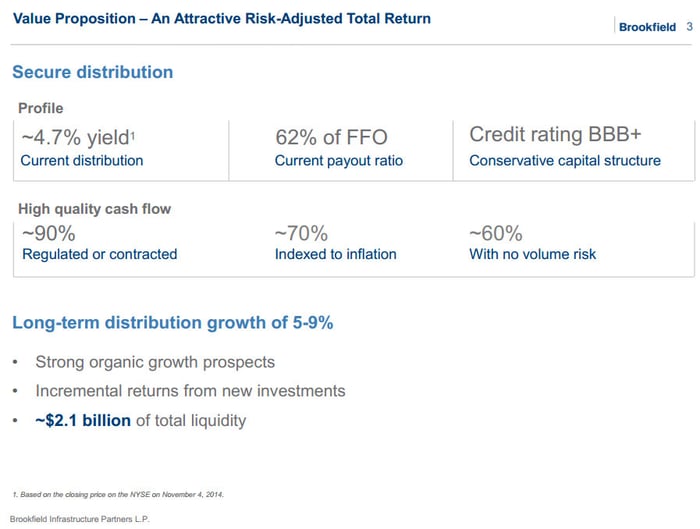 As that slide points out, the company's current payout ratio is 62%, while 90% of its cash flow is either regulated or contracted. That suggests that the income from Brookfield is on very solid ground. Further, the slide also points out that the company expects its payout to grow by 5%-9% per year. So, over time, income could grow to be fairly substantial.

Investor takeaway
Seadrill really blindsided investors by saying its dividend was safe through 2016, only to completely eliminate it 90 days later. That decision really hurt investors who'd been relying on that income. While it's a small consolation, at least there are plenty of income options out there that can be used to replace some of the income that used to come from Seadrill.