Monday morning began like an ordinary day for Apple (NASDAQ:AAPL) stock. Shares of Apple opened slightly below where they closed last Friday but soon rose into positive territory.

Then the bottom dropped out: 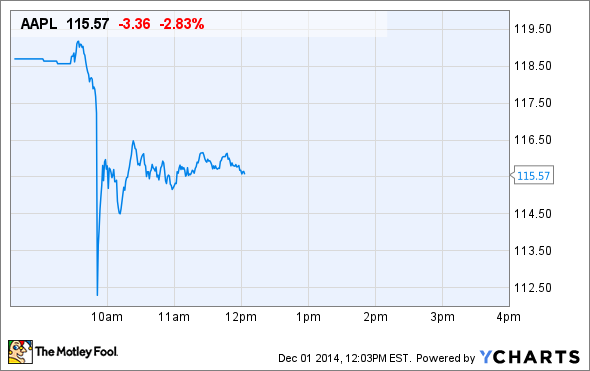 At 9:51 a.m., trading volume in Apple stock suddenly spiked, according to Reuters. The stock fell more than 3% just in that minute, and ultimately dropped as much as 6.4%! Does this mean the Apple rally is over?

iPhone demand is strong, but some investors worry that it's overhyped. Photo: The Motley Fool

All of this could be summed up a different way: Nobody has a clue why Apple stock suddenly plummeted on Monday morning. The only thing that anyone really knows is that a lot of people suddenly decided to sell Apple stock around the same time.

What people aren't saying
The really interesting thing about the Apple flash crash is that hardly anyone is talking about Apple's fundamentals. If some big piece of negative news about demand for Apple's products had come in this weekend, that would be a real source of concern for long-term investors.

However, demand for the iPhone -- Apple's main profit driver -- remains extremely strong. As of Monday, nearly 15% of iPhone usage came from the iPhone 6 and the iPhone 6 Plus, according to Fiksu, even though those models have only been available for two-and-a-half months.

This compares to 11% of iPhone usage coming from the iPhone 5s and iPhone 5c at the same time last year. In other words, the new iPhones are being adopted significantly faster than last year's models. iPhone sales may be up 40% or more year over year.

The iPhone 6 and iPhone 6 Plus are seeing stronger initial demand than last year's models. Photo: Apple

The strong rate of iPhone 6 and iPhone 6 Plus adoption is particularly impressive given that these phones are in short supply. Currently, Apple is projecting a three-to-five-day wait for the 16GB and 64GB models of both phones at its online store. The 128GB models have a seven-to-10-day wait. Walk-in retail availability is still spotty, which is also likely holding back sales.

Dips are buying opportunities
As of the early afternoon on Monday, the Apple flash crash gave way to a more measured pullback -- Apple stock was down a little less than 3% to just under $116 at the time of this writing. At that level, Apple shares are still reasonably valued at 15 times projected FY15 earnings.

Indeed, based on Apple's ample growth opportunities, investors should still consider buying the stock when it dips. The iPhone is rapidly gaining high-end market share as the introduction of larger-screened iPhones has removed one of the key selling points for Samsung's flagship phones.

The strong iPhone upgrade cycle could continue throughout 2015 and into 2016 as there are still hundreds of millions of 3.5-inch and 4-inch iPhones in use. Furthermore, Apple's newest hardware product line, the Apple Watch, will go on sale next year. If just 10% of all iPhone users buy an Apple Watch, this new product could immediately become a $10 billion business.

The main thing you need to know about the Apple flash crash is that it had nothing to do with the big-picture case for owning Apple stock. Apple is still an enormously powerful brand with high-quality products that people want to buy. That will keep its revenue and EPS marching higher over time.