Deere and Company is facing a difficult year in 2015, but what is the company doing to manage falling sales?

Deere & Company (DE 0.91%) recently beat fourth-quarter estimates, but served notice that 2015 is likely to be a tough year. It's hardly surprising given the price weakness in key crops like corn, wheat, soybeans, and cotton. Ultimately the company's fortunes will be tied to the cyclicality of the farming sector, and investors should follow events closely because a potential turnaround in crop prices will likely lead to the stock moving higher. However, before you rush to take a view, here are five things management thinks you should know. 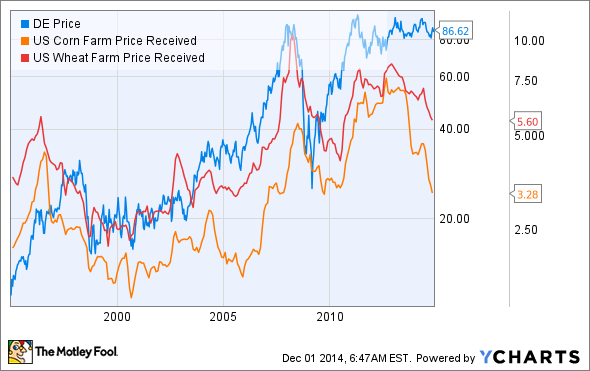 Deere & Company guidance disappoints; farmers' cash receipts seen as key
In a nutshell, management guided toward a decline in net sales of 15% mainly due to a forecast 20% net sales decline in its agriculture and turf segment.

First, how did Deere's management come up with this forecast? In answering a question from a Barclays analyst, Deere's director of investor relations, Tony Huegel, stated:

[W]e continue to believe that farm cash receipt is the best indicator of sales in the U.S. and Canada and specifically for large Ag it would be tied much more closely to crop cash receipts, which we've seen come down quite a bit recently.

In other words, its sales forecast is largely based on farmers' income, which in turn, largely depends on crop prices. This tells you that the internal management of the business will be managed on the basis of where Deere's management sees crop prices going. As outlined in its recent earnings, Deere's expectations for its key crop prices in 2015 were all lowered recently. So, let's look at what Deere is doing to manage the downturn.

Deere will face challenges with its large machinery sales in 2015. Source: Deere and Company

Inventory management
Second, management outlined how they are reducing inventory in order to prepare for lower sales. David Raso of Evercore asked a question relating to dealer inventory, and Huegel replied:

I would point out we had very large decrease, especially in the fourth quarter, as we pulled back on production. So, a lot of what maybe some had anticipated in lower receivables and inventory in 2015 actually happened in early 2014

Cutting receivables is important because it helps increase cash flow, and reducing inventory ahead of a slowdown can help to keep sales margin up (and increase cash flow), because the company will not be forced to slash prices to sell unwanted inventory.

All three forecast sales to fall next year, but Deere appears to be better prepared. Whether, AGCO and CNH Industrial will cut prices in order to reduce inventory in North America -- an event that could hurt Deere -- remains to be seen.

Output hours in the large ag equipment factories were down.. ...anywhere from 35% to 55%. This illustrates the aggressive manner in which we stepped on the brakes during the quarter to allowing production with reduced order volumes.

[They] are anticipated to be down another 20% in 2015. In relation to our structure line, that would bring sales down to what we consider trough levels, with the division operating at less than 80% of normal volume

Huegel (in answering a question from a JPMorgan analyst) went on to clarify that the agriculture and turf segment forecast 'would not be at 80%. That should be below 80% in our forecast'.

Essentially,management is saying that the company is structured to produce at 80%-120% of "normal" levels. This implies that if management sees sales as likely to consistently fall below 80% then there maybe some need for restructuring.

When modelling 2015, keep these factors in mind: price of about 2 points as well as an unfavorable mix of product as we discussed earlier and tier-4 product cost.

Huegel confirmed that both segments should positively contribute to pricing. In other words, despite lower sales, Deere is expecting price increases next year.

Deere's earnings call summary
All told, Deere's outlook isn't good, but the company is preparing for a tough environment next year. Cutting production and reducing inventory levels are a fine thing, but ultimately crop prices and farmers' cash receipts will decide the fate of its stock price. Deere's planned price increases will help, but it's hard to know how its competition will act given their inventory positions.