Barring a huge December surge, Netflix (NASDAQ:NFLX) won't pull a repeat of last year's 52-week performance and finish as the best stock in the S&P 500. Shares rose a blistering 300% to lead the market in 2013 but they are lagging the index since then. 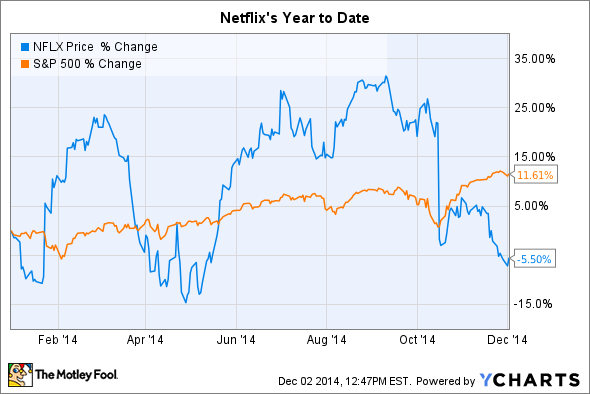 The business is going through major changes right now, which could explain Wall Street's nervousness heading into 2015. CEO Reed Hastings is trying to balance a pricey international expansion with slowing subscriber growth at home -- all while securing a multi-billion dollar pipeline of new content for the streaming service.

Those challenges raise the stakes for the fourth quarter performance and make December a critical time for Netflix investors. With that in mind, here are two trends to watch that are far more important than the wiggling stock price pictured above.

Every year around this time shoppers do Netflix a huge favor by buying millions of electronic devices that make its streaming service much more accessible. That trend has been a consistent boost to membership growth. The company added 2.3 million subscribers in last year's fourth quarter for a 14% improvement over the prior year's improvement. The same story held for 2012 when Netflix gained 2 million new members in the final quarter of the year. Management in both cases credited booming holiday sales of Internet connected screens for helping power fourth-quarter growth.

This year's early holiday results point to stronger demand for smartphones, TVs, tablets, and video game consoles that will again put millions of streaming-capable devices into people's homes and pockets this month.

However, that shopping tailwind should be countered with an even bigger headwind: the price increase that Netflix implemented this year. While it improved profitability, that pricing change depressed subscriber growth in the third quarter. It also led management to forecast a fourth quarter that for the first time includes fewer streaming member additions than in the prior year (1.9 million vs. 2.3 million).

Cutting prices isn't really an answer to that growth slowdown, as it would suck money away from the company's global expansion. Instead, Netflix is aiming to raise the perceived value of its service with quality content like this month's release of Marco Polo.

That original series is Netflix's most ambitious yet, both in terms of production cost and distribution plans. The company reportedly paid $90 million for 10 episodes, putting it in the same big-budget league as HBO's Game of Thrones. And, unlike with past original series, Netflix has exclusive international streaming rights for Marco Polo, which will make it the first real test of the value of having a global platform as a launchpad for exclusive content.

The show should also be a strong membership draw. We know that Orange is the New Black brought many new customers into the streaming service last year. Marco Polo will likely provide a similar bump, this time globally, in the weeks after the show starts streaming on Dec. 12.

Wall Street is focused on some big questions about Netflix's business, including whether the streamer has any pricing power after this year's increase hurt subscriber growth. When he was asked about the slower growth in the third quarter conference call, Hastings said the company was in an "adjustment period" that should be resolved as better content rolls onto the service.

December's results won't prove management right or wrong on that point. But at least investors will have a better idea of Netflix's domestic growth prospects and global content strategy once 2014 is behind us.