The Las Vegas Strip could be heading to its largest bankruptcy ever. Image source: public domain

Las Vegas has made more than a few losers in its day but it's not usually the house that ends up going broke. But that may be exactly what's happening in the heart of the Las Vegas Strip.

One of the biggest buyouts ever attempted was pulled off in Las Vegas when Apollo Global and TPG Capital bought Harrah's Entertainment for $30.7 billion in 2008. Billions of dollars in debt was piled onto Harrah's -- or Caesars Entertainment (NASDAQ:CZR) as it's known today -- balance sheet and before long the bet started going bad. The recession devastated Las Vegas' gaming revenue and an expansion of regional gaming around the country sank any recovery hopes Caesars had. Now, it's becoming apparent Caesars may succumb to over $25 billion in debt.

The impact on Las Vegas could be significant considering the fact that Caesars and its subsidiaries own nearly half of the Las Vegas Strip. Caesars owns its namesake Caesar's Palace as well as most of the property from Planet Hollywood all the way down to Harrah's Las Vegas. The properties make up the heart of the Las Vegas Strip and unless there's a solution worked out soon they may be in bankruptcy just after the turn of the new year.

How Caesars Entertainment got here
A highly leveraged balance sheet, the recession, and expansion of regional gaming was only part of the problem for Caesars Entertainment. After the company went public, it began splitting off subsidiaries like Caesars Acquisition Company (NASDAQ: CACQ) to own its most valuable assets, leaving most of the debt with the "old" Caesars. The start of this dizzying structure can be seen in the image below from a presentation late last year. 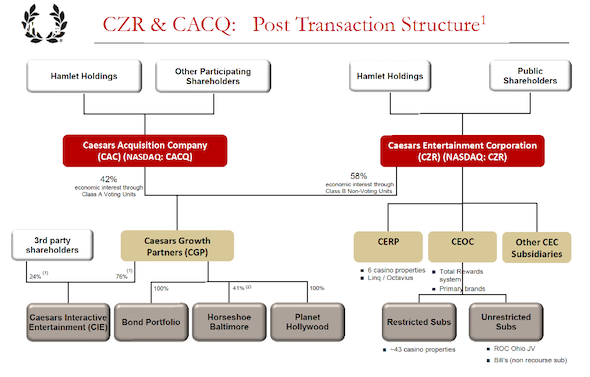 For Caesars, the problem creating so many subsidiaries is that debt holders who financed the company were intentionally cut out from the valuable assets as they were transferred to new companies. This would be like getting a mortgage to buy a home and then jacking up the home and moving to new land, leaving the bank with no collateral but the land where a house once sat.

Why Caesars is drowning in debt
None of this would be a problem if Caesars was able to pay its bills, but with $25 billion in debt and losses mounting every quarter the company can only pay its bills as long as it can get new debt. That's a problem now because at least four creditors have claimed Caesars defaulted when it transferred assets to new subsidiaries, which would trigger a default of all of its debt.

Caesars is aware of this and has been negotiating with creditors to refinance debt through new debt and equity offerings. But those talks reportedly broke down earlier this week and low level creditors were never happy with a proposed agreement.

Wynn Las Vegas and The Venetian Las Vegas are both more profitable than any of Caesars' resorts. Image source: The Motley Fool

If creditors don't agree to refinance debt Caesars could be forced into bankruptcy, the largest we've seen in Las Vegas. Given the massive debt load and questions surrounding the legality of the company's new legal structure I wouldn't doubt that's where we're heading.

How this will impact the Las Vegas Strip
The impact of a Caesars Entertainment bankruptcy on Las Vegas could be as small as a ripple or as big as a tidal wave.

There may be minimal short-term impact felt if creditors who Caesars owe money agree to restructure debt, take equity in the company, and don't force a protracted negotiation. But tensions between debt holders and Caesars are heating up and they may force a more complete breakdown of the company.

If Caesars is forced to break up into smaller pieces or sell off assets we could see a reshaping of The Strip. We could see valuable assets sold to rivals with strong balance sheets and underperforming assets could be sold to someone looking to demolish them for a new megaresort.

A bankruptcy of Caesars Entertainment could bring a wave of change to the Las Vegas Strip but no matter what happens the heart of The Strip will likely change forever. Caesars can't keep its business afloat with $25 billion of debt and by the end of 2015 the company will likely look very different than it does today.