It has been an awful second half of the year for investors in Pioneer Natural Resources (NYSE:PXD). Plunging oil prices have driven the stock down 37% off its high, as shown in the following chart. 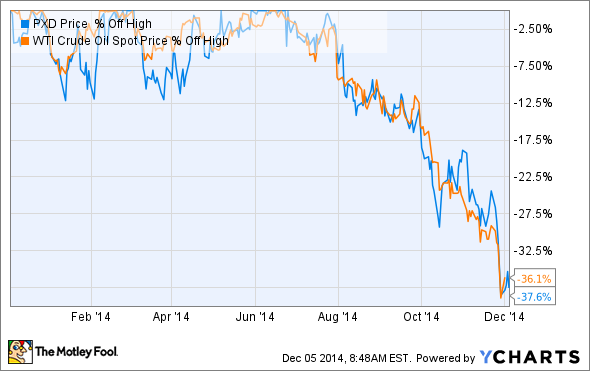 Unfortunately, buying shares in an oil company leaves an investor highly exposed to oil prices. This is true with Pioneer Natural Resources, even though it hedges a substantial amount of its oil production to mitigate this risk. Clearly, the stock will continue to fall as long as oil prices keep dropping because this company is built upon its ability to grow oil production from Texas.

That said, there are reasons to be bullish on the stock, as it can go higher even if oil prices don't move. But the price of oil is not the only danger to the company. Here are two other things that could hurt Pioneer Natural Resources' stock value even if oil prices stabilize.

Pioneer Natural Resources announced two plans to bolster its balance sheet in light of falling oil prices when it reported third-quarter results early last month. First, the company announced a billion-dollar equity offering, which it closed in early November. The second step in the process is to divest its share of a joint venture that owns Eagle Ford shale-related midstream assets. As the following slide notes, the data room for this asset was not expected to open until December, suggesting a sale won't come soon. 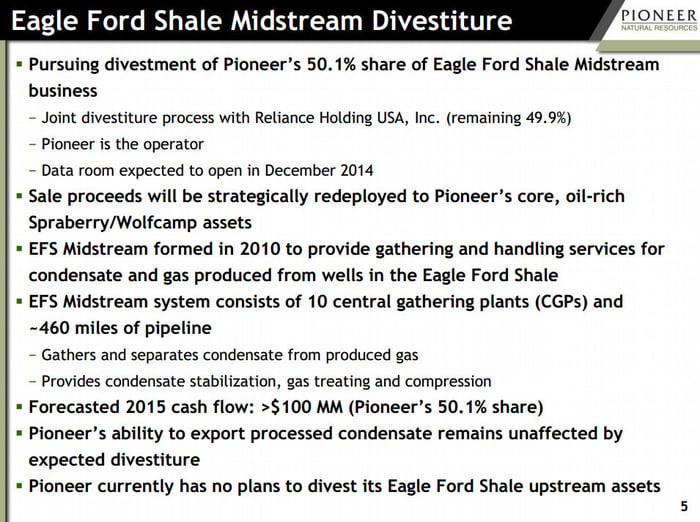 This slide shows that Pioneer Natural Resources' share of the joint venture is expected to generate about $100 million in cash flow next year. Typically, a sale would net a multiple of that cash flow, and recently the multiple fetched by midstream assets in a sale was rather generous at 9 to 12 times cash flow. This suggests Pioneer's interest in the joint venture is worth upward of $1.2 billion. However, with asset valuations in the oil patch plummeting, it's becoming increasingly unlikely that Pioneer Natural Resources will fetch a high-end multiple for these assets. A really weak sale price, say at less than nine times, could cause investors to sell off the stock, as the company needs the capital to develop its Permian Basin assets.

The other thing to watch is the company's growth plan. As of the end of the third quarter, Pioneer Natural Resources was on pace to increase production by 16% to 21% though 2016. It expected to remain on pace for this growth, even in a $70 to $80 oil price environment, because it could still make a 40% to 70% return on drilling new wells. However, with oil prices recently falling below the bottom end of that range, the company might rethink its growth plans.

If Pioneer Natural Resources ratchets back its growth plans, the stock will likely sell off. One reason investors are drawn to the company in the first place is its rapid production growth potential. Muted growth potential will dampen that enthusiasm and could cause growth investors to abandon the company.

Oil is by far the biggest driver of Pioneer Natural Resources' stock price these days. However, the sale of the company's midstream assets could also take share value down if the price disappoints. Furthermore, some growth investors might jump ship if Pioneer cuts back on its growth plans. All that being said, as long as oil prices don't fall permanently below the breakeven cost, there will be opportunities for Pioneer to make a lot of money from oil.