So long, CAPTCHA. We hardly knew ya.

Fourteen years ago, researchers at Carnegie Mellon University set up "CAPTCHA" as an online tool to help websites tell humans from spambots. Presented with a set of squiggly text, supposedly unintelligible to Web-crawling computers, website users would retype said text to prove they are human -- and not data-sucking Web bots.

Source: This and all following -- Google

One of these professors, duoLingo founder Luis von Ahn, later tweaked CAPTCHA to create a new tool -- reCAPTCHA -- for digitizing books: reCAPTCHA substituted barely legible text pulled from old manuscripts for random "squiggly letters" employed in CAPTCHA. Google (NASDAQ:GOOG) (NASDAQ:GOOGL), which was at the time starting its own digital library, liked the idea and bought the company. Humans trying to prove their humanity have been helping Google digitize the world's library ever since.

On Wednesday, Google announced the end of the reCAPTCHA experiment, lamenting "our research recently showed that today's Artificial Intelligence technology can solve even the most difficult variant of distorted text at 99.8% accuracy. Thus distorted text, on its own, is no longer a dependable test."

With spambots now capable of deciphering squiggly text with near 100% accuracy, Google is (mostly) ditching reCAPTCHA in favor of a new test of humanity that it calls "No CAPTCHA reCAPTCHA."

The new system works in one of three ways:

Door No. 1
In the best case scenario, you see something like this: Answer the questions, click the box -- and you're done. Google takes your answers, crunches your online history, tracks the movements of your mouse, and uses other Google-voodoo to determine you're a human, no squiggles required.

Door No. 2
If Google's supercomputers still can't figure out if you're a human from the above, Google will present a standard reCAPTCHA as a backup -- although if spambots are 99.8% inaccurate nowadays ... it's hard to see why. 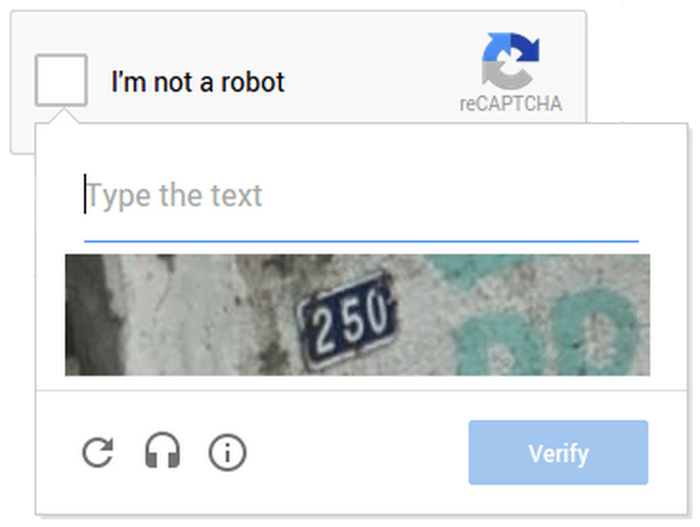 Door No. 3
Mobile Internet users, meanwhile, get to play guinea pig in a new Google experiment, where "No CAPTCHA reCAPTCHA" will show them a picture, a set of nine other pictures, and ask them to play a game of "which of these things is not like the other." For example, Google might show you a cat, then pictures of other cats of various ages, colors, and in different poses, plus pictures of puppies and turnips -- and ask you to indicate which of the pictures are feline.

The "aha!" moment
You probably see what Google is up to here. Instead of using CAPTCHA to digitize books, Google's game now is to have you teach its computers to recognize images. (Not coincidentally, Google bought an image recognition program from von Ahn back in 2005 and turned it into Google Image Labeler).

As Google explains: "It's much easier to tap photos of cats or turkeys than to tediously type a line of distorted text on your phone." And true, if this helps to keep the Internet free of spambots, that's a good thing. But what Google doesn't say is that more people probably search for cat pictures on the Web than for accurate transliterations of the Codex Gigas. So figuring out how to better label photographs will help Google sell more ads.

Dear Google: Please don't be evil
If that's all Google's up to here, then I call shenanigans on ditching reCAPTCHA in favor of "No CAPTCHA, etc." For one thing, the argument that spambots have gotten so smart, that reCAPTCHA no longer confuses them, just doesn't fit through Door No. 2 up above -- where Google says it will use reCAPTCHA squiggles as a backup for when No-CAPTCHA fails to confirm a person's humanity.

The simpler explanation may well be the more accurate one: Google will make more money from improving its ability to conduct image searches, so it's harnessing the challenge-response system to get users to help if figure out image search -- gratis -- and sacrificing the book digitization initiative on the altar of profit.

One thought
That said... I suppose, it is always possible that Google's ultimate objective is "none of the above." Its real aim could be to harness the wisdom of the crowd to spoil spambots, and at the same time teach its robotic self-driving cars to see better, and better distinguish one object from another. If that's Google's real game -- to teach its driverless cars to avoid hitting kittens in the street, then maybe that wouldn't be so evil after all.

Because any company that loves kittens can't be all bad.