A recent World Health Organization study shows that this growing problem is responsible for nearly a half-million cancer diagnoses each year.

When it comes to diagnosed diseases and disorders few, if any, are scarier than cancer. Based on statistics from the Centers for Disease Control and Prevention, cancer is the second-leading cause of death in the United States, trailing only heart disease. Even more concerning are predictions from the World Health Organization that globally diagnosed cancer cases over the coming two decades are expected to rise from 14 million per year to 22 million per year.

Yet, it isn't necessarily the growing statistics that make cancer scary, so much as it is the fact that many cancers simply don't have a cure as of yet. In spite of decades of research, scientists are still trying to unlock why cancer forms in the first place.  Although the mechanism of what cancer strikes one person and not the other is still in the process of being uncovered, there are a number of identified and generally accepted risk factors.

Cancer's "growing" concern
A few of these risk factors you might be acutely familiar with, such as genetics/family history as well as tobacco use. One factor you may not be aware of that's becoming a "growing" problem in terms of annual cancer diagnoses is obesity.

According to a recent study by the World Health Organization's International Agency for Research on Cancer (IARC), which was published in The Lancet Oncology, a high body mass index (BMI of 25 or higher) is now responsible for 481,000 global cancer cases each year. On a percentage basis this equates to 3.6% of all annual cancer diagnoses. Specifically, one-quarter of these cases were attributed to the BMI increase between 1982 and 2012. 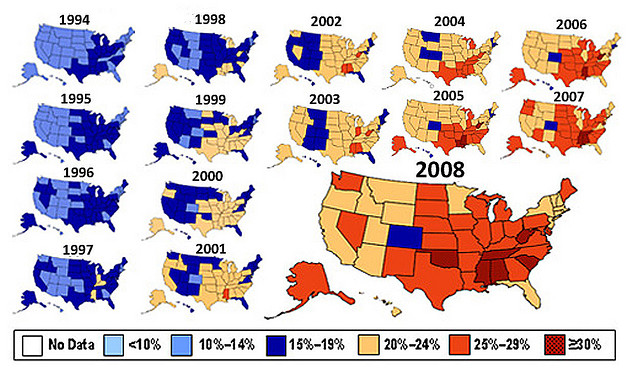 The study notes that having a high body mass index can lend to a higher risk of developing the following types of cancers: colon, kidney, rectum, esophageal, pancreas, gallbladder, postmenopausal breast, ovary, and endometrium. IARC's data also shows that cancer-related obesity cases were skewed heavily toward women. Within the study's 184-country scope, 345,000 women had their cancer associated with a high BMI compared to just 136,000 men.

A ray of hope
The findings from the IARC are pretty straightforward: we as a society need to lose weight to reduce our risk of developing cancer. Of course, that's easier said than done because not all high BMI cases are simply the result of a poor diet. Genetics also play a role in determining whether someone has a high BMI or not, making obesity a disease that's not as cut-and-dried as you might at first think.

If there is a ray of hope beyond this study, it's that we're beginning to see notable pharmaceutical advancements made in both the realm of weight control management as well as select cancer types mentioned above.

Promise exists but challenges remain
The past two years have witnessed not one, not two, but three weight control management drugs approved by the Food and Drug Administration, with a fourth potentially hitting the market within the next three years. The approved weight control drugs are VIVUS' (VVUS) Qsymia, Arena Pharmaceuticals' (ARNA) Belviq, and Orexigen Therapeutics' (NASDAQ: OREX) Contrave – and each has something unique to offer.

VIVUS' Qsymia, for instance, delivered the highest average weight-loss in trials with the recommended dose and highest daily dose yielding 6.7% and 8.9% weight loss, respectively, after one year. Unlike VIVUS' Qsymia, Arena brings to the table a marketing genius in Eisai. In exchange for 62.5%-68.5% of net revenue (based on sales) Eisai handles all of the marketing of Belviq and provided Arena with much needed upfront cash. Orexigen's Contrave may not have a brand-name marketing partner or offer the best weight loss in clinical trials, but it has delivered interim results from its roughly 8,900 patient cardiovascular outcomes study known as the Light Study and demonstrated the safety of its drug. That safety could make Contrave the weight loss drug of choice among physicians.

There are two caveats worth noting here. First, Arena and VIVUS have both struggled to get insurers to cover their medications thus far, and consumers have appeared less than excited about their new weight-loss option. In other words, temper your expectations for these drugmakers to revolutionize obesity care in the near-term.

Secondly, Zafgen (ZFGN) could be waiting in the wings with something better. Zafgen is still a wholly clinical-stage company, but its primary compound, beloranib, could eventually be a game-changer. Whereas the drugs mentioned above focus on reducing a patients' appetite, beloranib is actually a blocker of MetAP2 enzymes which help regulate the production of fatty acids in the body. It's clearly still a ways out, but this new pathway has promise for those with an extremely high BMI.

Take Roche's (RHHBY -2.04%) Perjeta as a good example of how far we've come in treating aggressive forms of breast cancer. In its recently released CLEOPATRA study of patients with previously untreated HER2-positive metastatic breast cancer, patients that received Perjeta, Herceptin, and docetaxel lived a median of 56.5 months compared to 40.8 months for those who received just Herceptin and docetaxel. The 56.5 month survival was the longest median overall survival observed in any late-stage cancer trial to date. That's incredible progress!

Yet, for each big jump like this we've seen only marginal improvements in treating late-stage pancreatic, kidney, and colon cancer, to name a few. There's certainly a lot of work and research left to be done.

Putting things into perspective
Going forward the IARC fully expects economic development to drive obesity rates around the globe higher, making it all the more important that obesity is addressed on a national and global level.

But, by that same token, Dr. Benjamin Cairns at the University of Oxford in the U.K. pointed out that the only reason 481,000 (the number of global cancer cases each year attributed to high BMI) seems like such a large number is because the global population is growing. In short, there are still far more dangerous cancer-causing risk factors out there, such as tobacco use, for us to be concerned about. While focusing on reducing obesity should be in the world's game plan, eradicating tobacco use should command even greater importance.

Ultimately, the goal here is simple: to help people live longer and healthier lives. With a defined game plan on treating obesity and an increased focus on cancer drug research we would appear to be headed in the right direction. Here's to hoping for a reduction in weight-related cancer diagnoses over the coming years.