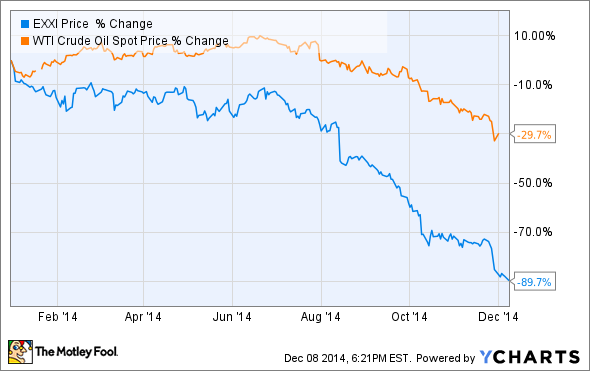 What? Shares of this small-cap oil and gas producer plunged a stunning 14.6% on nearly double the normal volume to its lowest price since the depth of the financial crisis in 2009.

Why? World oil prices cratered a further 4%. Crude's continued slide was courtesy of key OPEC insiders, specifically the CEO of Kuwait's national oil company, proclaiming his belief that oil will remain around $65 for the next six or seven months. That coincides with the next OPEC meeting on June 5, 2015.

Energy XXI has seen its shares hit much harder than other energy producers because its balance sheet is so terrible. For example, the $263 million company has $119.5 million in cash but $3.6 billion in debt (13.7 times its market cap). This enormous debt burden (its debt-to-equity ratio is more than four times that of its average industry peer) generated $66 million in interest this past quarter alone. That represents a dangerous 16.4% of revenue and 32.4% of operating cash flow.

What Now? Given that Energy XXI's combined interest and capital expenditure budget (what it spends to grow production) represented 86% of revenue in its last quarter, and given that the company has a poor hedging position of only 33% of its oil production through the end of 2015, investors should potentially take this company's ongoing price collapse as a warning sign to stay away.

Its debt is simply too high (representing 90% of its enterprise value) and hedging position too low to withstand a continued plunging in oil prices that may remain low for the first half of the year or longer. If current energy prices persist or drop even lower, Energy XXI is likely to have to sell off valuable assets just to service its debt. Therefore, an investment in Energy XXI today is a speculative play that oil prices will rebound faster and sharper than many now believe possible.