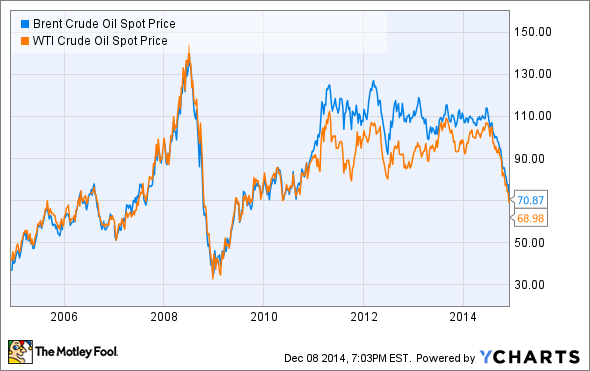 What? Crude oil prices swooned another 4.1% today, hitting their lowest points since the financial panic of 2008-2009. Crude's continued plunge once more turned the energy sector into a sea of red, with 38 of the top 50 losers of the day being stocks in or related to the energy sector, including these top names:

Why? The CEO of Kuwait's national oil company proclaimed his belief that crude will remain around $65 for the next six to seven months, which happens to coincide with the next OPEC meeting on June 5, 2015.

What Now? The debate over the short- to medium-term direction of the oil market continues.

On one side are those who believe that improved drilling techniques and continually lower shale drilling costs in the U.S. will help the nation win its game of chicken with OPEC. For example, according to energy analysis firm IHS, the median breakeven price for U.S. shale producers has dropped 20% since just last summer, from $70 to $57 a barrel.

Meanwhile, Fadel Gheit, senior energy analyst at Oppenheimer, is one of several analysts who believe that over leveraged U.S. oil producers may have no choice but to throw the taps wide open in an effort to maximize cash flow and pay the interest on their debts. Recently, Gheit told CNBC:

No matter how low oil prices go, there will be no (shale) production shut in. ... Oil prices will have to go below $30 for some of these wells to be shut in, and even then the owners need the cash to survive. They will milk the cow until the cow drops dead.

On the other side of the debate are those such as Vikas Dwivedi, Houston-based oil and gas economist for the consultancy firm Macquarie Group, who thinks U.S. oil production will begin to decline below $70 a barrel -- because, according to Bob Brackett at the Sanford C. Bernstein & Co. analyst firm, 33% of U.S. oil production is unprofitable below $80 a barrel.

This lack of profitability is perhaps why permits for new U.S. oil drilling declined by 40% in November, possibly indicating that production growth will soon slow, stop, and reverse. That might cause the oil markets to bottom or even rise, something that many oil-producing nations badly need.

Despite having some of the lowest production costs in the world, many OPEC nations are so dependent on oil revenues to support welfare systems and fund national budgets that they require oil prices far higher than U.S. producers to break even. That's why many OPEC nations such as Iran, Libya, and Venezuela were furious with Saudi Arabia at the Nov. 27 meeting for persuading the cartel to maintain production at current levels.

The prospect of another seven months of hemorrhaging red ink terrifies these petro states because some of them, Venezuela most of all, are already teetering on the verge of debt default and social unrest.

What should I do?
Remember that no one can accurately predict the direction of the oil market in the short term and that the best course of action for long-term investors is to remember the wise words of history's greatest investor, Warren Buffett:

The best course of action is to only invest money you won't need for five to 10 years and to invest in solid, well-run companies with bright futures in a growth industry such as energy. Don't try to time the market, because all the studies say you'll lose.

Don't borrow on margin to pump up your yields or capital gains, because, in the words of John Maynard Keynes, "Markets can remain irrational longer than you can remain solvent."

Just invest 10% to 15% of your gross income each month into a diversified portfolio including high-quality energy companies such as those listed here and wait out the terrible storm while reinvesting the dividends and distributions.

It may be terrifying, but numerous studies and Warren Buffett both prove that the best way to make a killing in the market is to be a long-term investor, buying when everyone else can't wait to unload already undervalued shares. If prices keep dropping with no fundamental change in the underlying business, then pay no attention to the price and keep adding to your position, locking in a higher yield and better long-term capital gains.