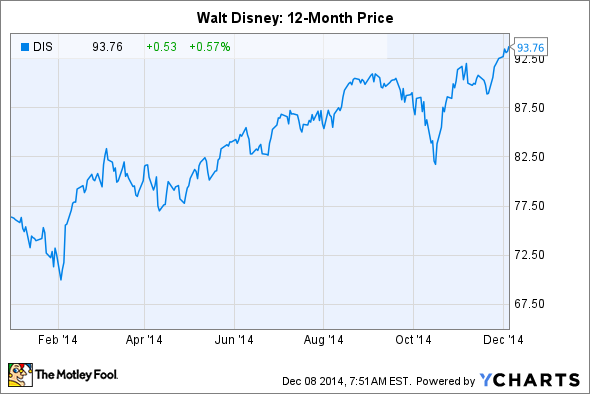 The average analyst estimate for Disney's fiscal 2015 earnings is $4.74, according to analysts polled by Morningstar. If we multiply that by its current trailing P/E of 22, a $100 price target could be justified. But a lot can change over a year -- Disney could miss earnings expectations or the overall market could decline. However, I believe three big catalysts in the coming year could push Disney stock past $100.

Marvel and Star Wars
Disney's studio entertainment division -- which accounted for 15% of the company's revenue and 12% of its operating income in fiscal 2014 -- is one of the most self-sustaining gold mines in Hollywood. In 2014, its revenue rose 22% year over year as operating income more than doubled.

In 2015, two of the segment's crown jewels, Marvel and Lucasfilm, are slated to release three big movies: Avengers: Age of Ultron (May), Ant-Man (July), and Star Wars: Episode VII (December).

To understand how big these films could be, let's crunch some numbers. Age of Ultron has an estimated production budget of $250 million while Episode VII's is pegged at roughly $200 million. Ant-Man's budget is unknown, but it could cost about $100 million to $150 million (in line with the first Iron Man and Thor films).

Now consider the potential rewards: The first Avengers film grossed a whopping $1.52 billion worldwide, and the last Star Wars film, Episode III: Revenge of the Sith, raked in $849 million. There's no exact comparison for Ant-Man, but Guardians of the Galaxy, which also suffered from a lack of mainstream recognition, grossed $772 million. Assuming the three new films match those older films, their box office revenue might top $3 billion on a combined production budget of $550 million.

Assuming each of those three films has a marketing budget of $100 million (the same as The Avengers), and the theaters keep about half of the ticket sales (which varies depending on individual agreements), we get a projected gross profit of $650 million from just three theatrical releases. More importantly, Disney can milk these franchises for years to come, with the Marvel Cinematic Universe mapped out until 2019 and Star Wars spinoff films on the way.

Shanghai Disney Resort
In 2014, Disney's parks and resorts division accounted for 31% of its revenue, which climbed 7% year over year, and 20% of its operating income, which rose 20%.

Shanghai Disney Resort, Disney's second theme park in China, is scheduled to open in early 2015. It is a 34 billion RMB ($5.5 billion) project that includes two themed hotels with a total of 1,220 rooms, an outdoor recreational area, and a full-sized theme park on over 1,000 acres. That will make it the largest Disney resort in Asia, three times larger than Hong Kong Disneyland Resort and twice the size of Tokyo Disneyland Resort.

Disney is operating both Chinese parks through joint ventures. It owns 48% of Hong Kong Disneyland and 43% of Shanghai Disney Resort. Another joint venture, of which Disney controls 70%, is responsible for constructing and operating the Shanghai resort.

The Chinese love Disneyland. Between 2008 and 2013, Hong Kong Disneyland's annual attendance soared from 4.5 million to 7.4 million. That makes it Disney's second-fastest-growing theme park and resort worldwide, on a year-over-year basis, after Disneyland Tokyo. If Shanghai Disney Resort posts even higher growth figures than Hong Kong Disneyland, the company could expand its theme parks to other major Chinese urban centers like Beijing and Chengdu.

To Infinity ... and beyond
Finally, Disney's interactive division, which only accounted for 2.7% of its revenue and less than a percent of its operating income in 2014, is rapidly growing. The segment's top line grew 22% year over year as it posted its first ever operating profit of $116 million last year. 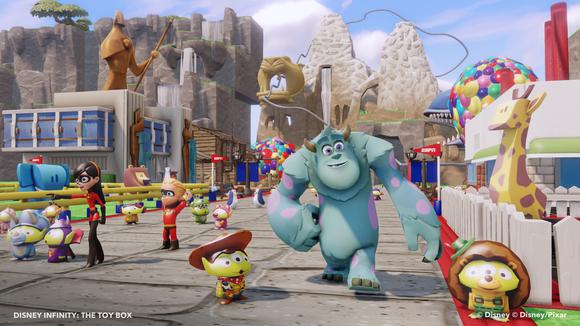 The brilliance of Disney's approach with Infinity is that it uses it as a "virtual home" for all of its top franchises, allowing Elsa, Captain America, and Buzz Lightyear to interact within virtual playsets.

The Infinity toys generated $500 million in sales between August 2012 and April 2013, ranking among the top 10 best-selling games of the year, according to NPD Group. The second batch, which added Marvel characters to the mix, could be an even bigger hit this holiday season.

Sit back and relax
If you're a long-term Disney investor like I am, just sit back and enjoy the ride. The company excels at milking its top franchises and expanding their halo effect across all of its business segments.

Marvel, Star Wars, its theme parks, and Infinity are all built to last for years. Based on this sustainable growth, I believe Disney could easily post the 11% earnings growth needed in 2015 to hit analyst price targets, which could push its stock price well above $100 per share.