ConocoPhillips (NYSE:COP) earlier this fall was the first big oil company to suggest to investors that its capital spending would drop in 2015. The company has now announced a 2015 capital spending budget of $13.5 billion, which is a 20% reduction from 2014. However, the company still plans to deliver 3% production growth next year.

What's getting the ax?

ConocoPhillips is cutting spending in all four of its capital budget items: base maintenance, development drilling programs, major projects, and exploration and appraisal. Base maintenance and exploration and appraisal will see the smallest cuts, dropping from about $2.1 billion each this year to $1.9 billion and $1.8 billion, respectively, in 2015.

The company's development drilling program will see the largest cut, followed by major projects. Development drilling is being cut by 23%, or $1.5 billion, to $5 billion. Most of that money will be spent to develop the company's low-cost shale acreage in the Eagle Ford and Bakken shale plays. The company plans to significantly defer investments in emerging shale plays, which include the Permian Basin and Niobrara Formation, as well as Canada's Montney and Duvernay shales.

Meanwhile, spending on major projects will be cut by $1 billion to $4.8 billion. However, this was always part of the plan, as 2014 was the company's spending peak for major projects, including APLNG and Surmont Phase 2. The company plans next year to complete those two projects, while also investing in major projects in Alaska, Europe, and Malaysia.

Where's the growth?
The aim for 3% growth in 2015 is on the low end of the company's five-year plan to grow production by 3%-5% per year through 2017. That goal should remain feasible despite the big spending cut, thanks to two operational areas.

The first key source of growth is production from major projects that will come online in 2015. The largest of these major projects include Eldfisk II in Europe, APLNG in Australia, and Surmont Phase 2 in the Canadian oil sands. Also, as the following slide shows, 2015 will be a particularly busy year for project start-ups in Canada. 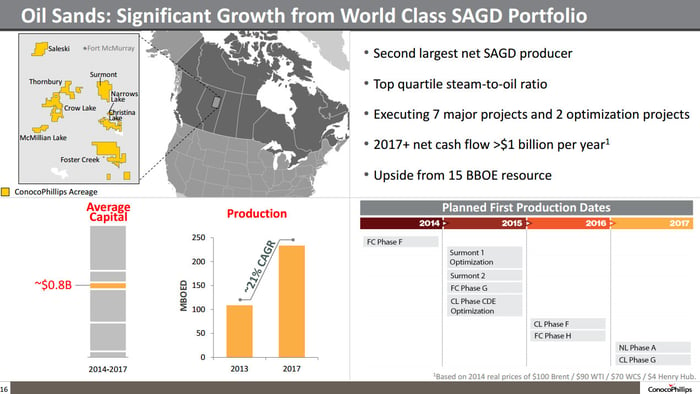 The other important growth area in 2015 will be development drilling in the Bakken and Eagle Ford shales. ConocoPhillips has the lowest cost of supply in both plays: its average wellhead breakeven price is less than $40 per barrel. That means the company can continue to grow production even though oil prices have significantly weakened. This also bodes well for other shale drillers, demonstrating that even in today's environment these plays can deliver growth and strong returns.

Investor takeaway
Thanks to its large scale and diversification, ConocoPhillips can spend 2015 focused on only its best opportunities for growth. This is why the company can slash 20% from capital spending and still deliver on its promised growth target. The company's ability to weather the storm in the oil markets makes it a solid stock for long-term investors.