Operating results are down, but management plans to return more cash to shareholders in the years ahead. Here's how.

And yet management reiterated its plan to return as much as $20 billion to investors through dividends and share repurchases over the next three years, which would be 20% above the prior three year period. With quick profit growth unlikely, you might wonder where McDonald's executives expect to get all of that extra cash from. Sure, debt will probably play a role. But most of the additional dividend funds will come from two places: operating cash flow and store refranchising.

Operating cash flow
Even in an era of shrinking sales, McDonald's remains a cash-generating machine. The company produced $5.2 billion through the first three quarters of 2014 -- all while customer traffic dipped and overall comps fell by 1% globally.

But as bad as this year's operating environment has been, that cash flow performance is on par with the same period in 2013 when McDonald's saw a slight comps improvement. The point here is that Mickey D's business has substantial financial power even during weaker times like these. 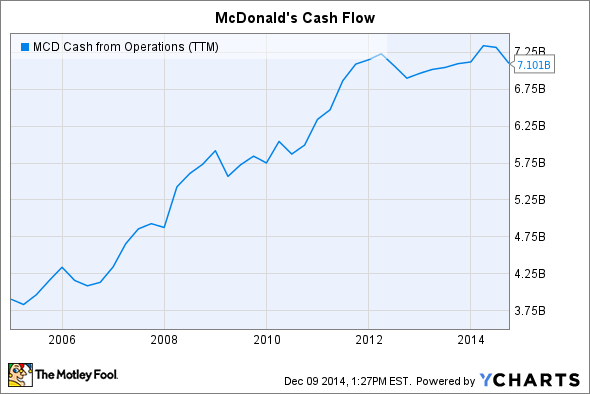 And not only is cash flow strong right now, but it's also substantially higher than McDonald's capital requirements. The company typically spends about $3 billion each year on investments in the business such as store remodeling and the launching of new locations. That consistently leaves around $4 billion in free cash to be distributed to shareholders, mostly in the form of dividend payments.

Selling more than burgers
McDonald's is also raising cash by selling off some of its company-owned locations. Known as "refranchising," this process tends to pinch sales growth as refranchised locations exit the company-owned base of restaurants. However, in exchange for that revenue drop the franchisor gets increased profitability, stronger cash flow, and a more predictable revenue stream that now comes from franchisees in addition to fast food customers. Wendy's, for example, had good results using that process in 2013.

For its part, McDonald's is planning on refranchising more than 1,500 locations in the next three years for a 50% boost over the prior three year period. That should bring the company's ownership level down slightly from current the 19% mark. But it will also raise plenty of cash to fund dividend hikes like the 5% boost that McDonald's gave investors this year.

With its 3.4% yield, McDonald's is one of heftiest dividend payers in the Dow. Shrinking customer traffic has held the stock price down, and those weak results threaten to keep Mickey D's an underperformer in the blue-chip index yet again for 2014. But the company has several paths toward increasing cash returns to shareholders that don't rely on a quick rebound in the fast food industry. A stellar credit position gives it access to billions in cheap debt. But, more importantly, its cash flow is near a record high while refranchising plans will also help fund a boost in dividend and share repurchase spending through 2016.

Demitrios Kalogeropoulos owns shares of McDonald's. The Motley Fool recommends McDonald's. Try any of our Foolish newsletter services free for 30 days. We Fools may not all hold the same opinions, but we all believe that considering a diverse range of insights makes us better investors. The Motley Fool has a disclosure policy.