For that past few weeks hedge funds have been predicting doom and gloom in the oil markets. Some hedge fund managers even quipped that oil prices were heading to zero. Turns out those hedge funds were right to be bearish on oil as it has fallen another 19% since those comments were made. 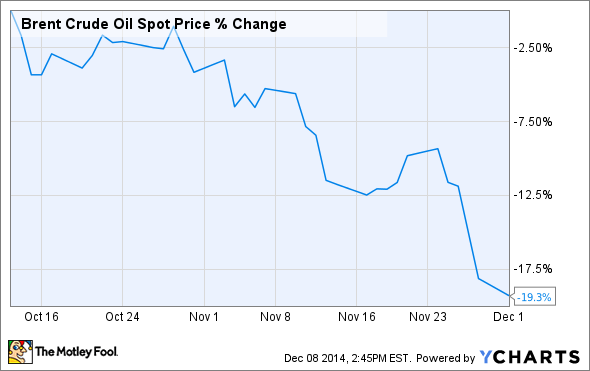 However, now that oil prices have really started to free fall, thanks in part to OPEC's decision to stand firm on production, we're beginning to see hedge funds reverse course. Some are actually starting to turn bullish on oil prices.

This past week Bloomberg reported that oil speculators were boosting their net long positions in West Texas Intermediate crude oil, which is the U.S. oil benchmark. Those speculators increased net-long positions, which are bullish bets, by 14% last week alone. That's the biggest increase in 20 months according to data from the U.S. Commodity Futures Trading Commission. What's just as interesting is not only are traders increasing bullish bets, but short wagers fell by 15% as speculators are beginning to cash out those bearish bets too.

What does this mean for the average investor?
For most investors this shift in sentiment would mean one thing. Our oil stocks might finally stop going down. It has been a brutal sell-off over the past few months as many oil stocks are at panic level prices. Upstream MLPs, for example, now sport yields in the upper teens while debt laden shale drillers have seen their stock prices plunge to the low single digits. Meanwhile, even larger oil companies have had 20%-30% shaved off of their stock prices. So, a bottoming in the price of oil would help to put a firmer floor under these stocks.

Further, once oil prices do bottom and stabilize it will give everyone something to work with. Most oil companies can still make a decent profit even with oil in the $70 per barrel range. It's when there is worry that oil prices could hit lows not seen since the financial crisis that the talk shifts to what oil companies can actually survive that drop. That uncertainty is causing investors to unload oil stocks while forcing companies to really reevaluate future plans. Stabilization will therefore allow investors to begin to more confidently pick through the pile of rubble in the energy industry looking for bargain stocks to buy.

Investor takeaway
Hedge funds are beginning to signal that the oil sell-off is over. They are closing up bearish bets and opening up new bullish bets. That being said, hedge funds aren't always correct so that doesn't mean the oil markets aren't still going to be in a rough patch for some time, but it is a point of reference that investors can keep an eye on.