Transocean Ltd boasts of a $24 billion contract backlog, but with oil prices really plunging is that revenue safe?

If there is one thing investors really hate it's uncertainty. The uncertainty for offshore drillers like Transocean (RIG 1.12%) has only gotten worse over the past year. An already shaky offshore drilling market has been upended in more recent months by the unforeseen plunge in oil prices. As things have gone from bad to worst it's causing Transocean's stock to freefall. 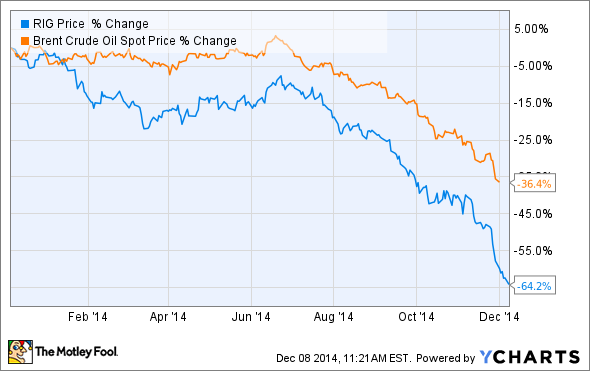 Investors now are bracing for the next shoe to drop. That shoe, in the minds of some, is that the company's contract backlog will start to fall apart as oil prices keep plunging. Let's drill down a bit deeper to see if this is a worry investors should take seriously.

More than just a handshake deal
Transocean's current contract backlog stands at a very robust $23.6 billion. As the following slide notes the company's backlog is expected to provide it with $6.2 billion in revenue next year with solid revenue visibility for several years into the future. 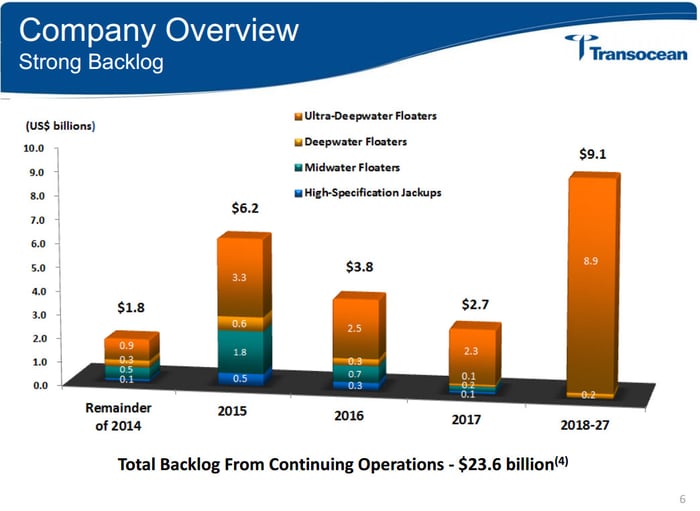 The worry is that some of Transocean's customers might not be able to withstand the plunge in oil prices and could be forced to cancel their contracts. Because of this worry CEO Steven Newman took the opportunity at a recent energy conference to address these concerns about the company's contract backlog head on.

He said that when the industry enters into challenging operation conditions like the one it finds itself in today that it is not uncommon for questions to arise in regards to the quality of the company's backlog. Investors want to make sure that the company has the ability to "actually translate that backlog into income statement revenue," as Newman put it. To ease the minds of analysts and investors he provided an example from the recent past. He said:

So, I'll give you one statistic. At the height of the financial crisis in the latter part of 2008, the company had $40 billion in contracted backlog and we lost 1% of that, $400 million. And it wasn't because customers walked away from the contracts or forced us into renegotiating those contracts. It was because the customers ceased to exist. They simply evaporated as a result of their financial condition.

The fact that the company emerged out of the worst financial crisis in decades only losing 1% of its backlog suggests that it should emerge out of this next crisis with even better results. One reason for this, as Newman went on to say: "Contract sanctity in our business has a long, long history, and so you should take a fair amount of comfort from that $24 billion in contracted backlog." However, the company is relying on more than just contract sanctity to ensure its backlog is secure.

As you would expect, the majority of that [contract backlog] is associated with our ultra-deepwater fleet, tends to be longer term contracts at higher dayrates. So, a nice picture going on into the future. It provides a little bit of a foundation, a little bit of stability in what are some uncertain and potentially uncomfortable times.

We see what he's referring to in the following slide, which shows that more than half of the company's backlog is backed by the really strong contracts of its ultradeepwater drilling fleet. 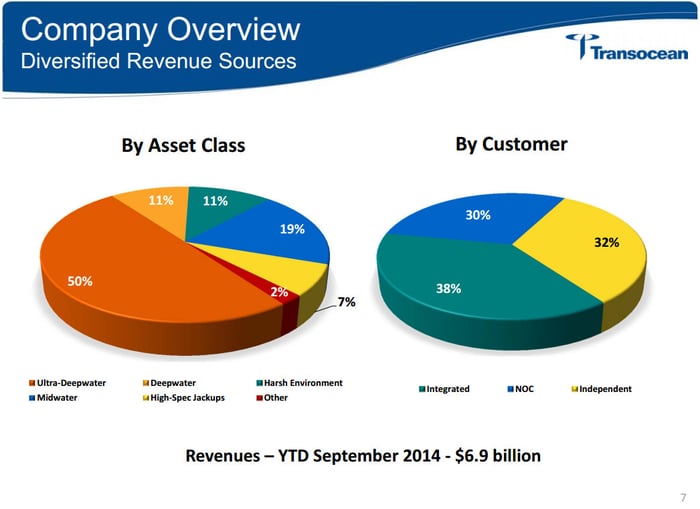 Because these rigs tend to be signed to long-term contracts at higher day rates it provides a very solid foundation to the backlog. These top of the line rigs aren't leased out to any drilling company either. Most are leased by either a large integrated oil company or a national oil company. These really strong customers provide a lot of security to the backlog as these customers have very little likelihood of backing out of their contracts or going under. Moreover, even the independent customers tend to be large companies that are well capitalized and can withstand the downturn in oil prices. Bottom line, the company doesn't lease its rigs to oil speculators so that provides a lot of security that its customers can endure the current turmoil in the oil markets.

Investor takeaway
Investors can rest easy in knowing that there is very little risk in Transocean's contract backlog. Not only has the company's own history taught us that its backlog can survive the toughest of times, but the makeup of today's backlog is strong. While this doesn't mean the company has an easy road ahead of it, it does mean that it has one less risk to worry about as it maneuvers the current downturn in the oil market.

Matt DiLallo has no position in any stocks mentioned. The Motley Fool owns shares of Transocean. Try any of our Foolish newsletter services free for 30 days. We Fools may not all hold the same opinions, but we all believe that considering a diverse range of insights makes us better investors. The Motley Fool has a disclosure policy.