When we think of the top oil stocks our minds immediately focus on big oil names like ExxonMobil (NYSE:XOM) or Chevron (NYSE:CVX). Both are fully integrated global oil giants that are also part of the Dow Jones Industrial Average. They've earned blue chip stock status by enduring through the ups and downs of the turbulent oil market. However, there is another big oil name that should be part of the blue chip oil stock elite and that's ConocoPhillips (NYSE:COP). Here's why I think it rightfully deserves the title, blue chip stock.

What are blue chip stocks?

First, before we bestow the title on ConocoPhillips we need to define the term. Blue chip stocks are large, well-established and financially sound companies that have been around for a long time. A blue chip stock is typically a market leader and has a reputation for quality, reliability, and profitability in good times and in bad. Blue chip stocks also typically are well-known and pay a dividend. And, as I mentioned already the bluest of the blue chip stocks make up the 30 members of the Dow Jones Industrial Average.

That definition, aside from being in the Dow, really fits ConocoPhillips perfectly. It is America's largest independent oil and gas company, its balance sheet is rock solid and the company pays a very generous dividend. That's not to mention the fact that ConocoPhillips expects to grow its oil and gas production as fast, if not faster, than either Chevron or Exxon. Furthermore, the company's reputation hasn't been tarnished in the past by a big oil spill or other environmental disaster, which actually gives it a leg up on both Chevron and Exxon as their reputations have been tarnished by Ecuador and Valdez, respectively.

All that being said, what is most appealing about ConocoPhillips isn't where it is today, or its solid past, but where the company is going in the future. Here, we see a company that is focused on growth that creates the most value for investors. This is a company that's not focused on simply growing its oil and gas production to build an energy empire, but on growing its highest margin production to deliver more value to investors. As the following slide notes, the company is pouring most of its investment dollars into projects that will really move the needle for future profitability. 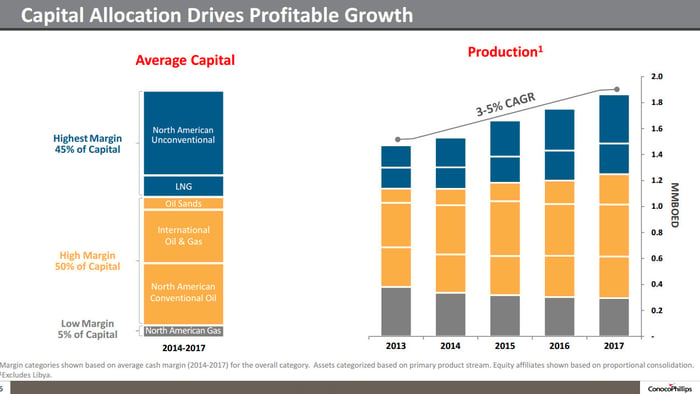 In light of the recent downturn in oil prices, this focus on highest margin projects is really important. That's because those projects will enable the company to remain profitable in a bad oil market such as the one we are experiencing right now. Moreover, once the oil market improves, this high margin production will really shine as it will produce boatloads of cash flow in good times.

ConocoPhillips really is one of the best oil stocks out there these days. It has global scale and diversification that provides it with a multitude of investment opportunities. That gives the company the flexibility to invest in really high margin projects that will deliver value in good times and in bad. When we add in the company's compelling dividend and its untarnished reputation, we come away with a real blue chip oil stock that can hold a core spot in a long-term investor's portfolio.