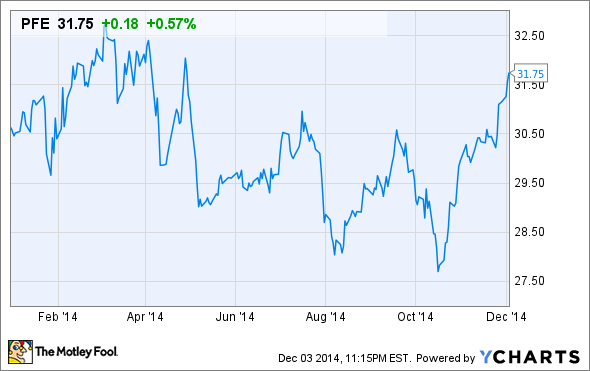 Considering what a strong year it's been for health care stocks, especially biotech and pharmaceutical companies, Pfizer's (NYSE:PFE) 7% year-to-date gains might leave a lot to be desired among shareholders.

Pfizer struggled in 2014, as it has in recent years, with the ongoing loss of exclusivity in previously core drugs. Revenue from cholesterol-lowering drug Lipitor fell off a cliff, along with Detrol, Viagra, Effexor, and Spiriva in select countries. This month will see blockbuster anti-inflammatory Celebrex come off patent as well.

But here's the good news for shareholders: 2014 is almost over, and 2015 could be a much better year. Though multiple catalyst wait in the wings for Pfizer, three in particular stand out as reasons why Pfizer stock could soar in 2015. Let's take a closer look at what they are.

No. 1: A possible palbociclib approval

The drug, which is given with Novartis' Femara, burst onto the scene in 2012 when an interim analysis demonstrated a median progression-free survival of 26.1 months, compared to just 7.5 months at the time for the Femara monotherapy arm.

Pfizer shares cooled a bit when the final study data (known as PALOMA-1) was released, showing a near doubling in median PFS to 20.2 months for the palbociclib-treated group compared to 10.2 months for the Femara-only group, and a 4.2 month improvement in overall survival to 37.5 months. Still, this estrogen-positive, HER2-negative drug performed marvelously in clinical studies, and both physicians and investors are excited about its potential.

Because palbociclib was granted the breakthrough therapy designation by the Food and Drug Administration, Pfizer was allowed to submit its new drug application prior to running a long and costly phase 3 study as is customary. This means ER-positive/HER2-negative breast cancer patients might have a newly approved drug by mid-April, which is when the FDA is expected to hand out its decision. Although estimates vary, palbociclib could bring in anywhere from $3 billion to $9 billion in annual sales.

No. 2: A meaningful buyout or merger
It's no secret that Pfizer's been looking for ways to boost its top- and bottom-line through a merger or acquisition. Earlier this year Pfizer pursued AstraZeneca like a dog chasing the milkman, only to be denied by every gate along the way. With new rules in place concerning tax inversion deals, the probability of Pfizer buying AstraZeneca seems pretty small now.

However, that does mean Pfizer is done trying to buy its peers. Instead of angling toward a mammoth deal, there could be plenty of other growing biopharmaceuticals that could help spark its pipeline. A few companies that could make sense for Pfizer include Jazz Pharmaceuticals with its rapidly growing specialty disease drug portfolio, BioMarin Pharmaceutical with its even more specialized ultra-orphan disease portfolio, and Medivation, which has Xtandi, an effective late-stage prostate cancer drug. Since Pfizer's Sutent failed in an advanced prostate cancer trial, picking up Medivation could make sense, though it would have to split Xtandi sales with Astellas Pharma, the co-developer of Xtandi.

I want to be crystal clear on one point here: None of these companies is currently rumored to be bought by Pfizer. This is merely a hypothetical scenario to show that opportunities for accretive purchases exist for the company. I'll be looking for the big pharma giant to make a sizable move in 2015, though it may not be with one of the aforementioned companies.

No. 3: Clinical success for Xeljanz
Lastly, expect 2015 to be a big year for Pfizer in terms of data for anti-inflammatory drug Xeljanz.

Approved in 2012 to treat moderate-to-severely active rheumatoid arthritis , Xeljanz sales managed to triple through the first nine months of fiscal 2014 to $205 million from $68 million through Q3 2013. Yet Xeljanz has nonetheless disappointed many analysts on Wall Street. The upcoming year could very well be make-or-break for Xeljanz, with a new drug application filing expected for chronic plaque psoriasis (an indication with a large patient pool) in early 2015 and perhaps even an FDA decision before the year is up.

In addition, Xeljanz is in multiple other clinical studies for ulcerative colitis, psoriatic arthritis, and ankylosing spondylitis, to name a few conditions. Data from these studies could be available in the upcoming year, and assuming it's positive could boost Pfizer's stock.

Despite its sluggish start, Xeljanz is still fully expected to be a blockbuster drug capable of bringing in $1.5 billion to $2 billion in peak sales, so it remains a must-watch catalyst going forward.

Pfizer clearly still has some hurdles to overcome, but a handful of key catalysts on the horizon could send its shares soaring in 2015.