The warehouse club once again ranks as one Glassdoor's best places to work.

For the fourth year in a row, the warehouse giant ranked as one of the top employers in the seventh annual Glassdoor survey of the 50 Best Places to Work. But more than that, Costco is the top retailer to work for.

Coming in at 29th on the Best Places to Work list with a 3.9 rating out of 5, Costco was only one of two retailers employees thought about highly enough to actually have it rank. The only other retailer to make the list was family owned regional supermarket chain Wegmans, which placed 32nd on the survey. 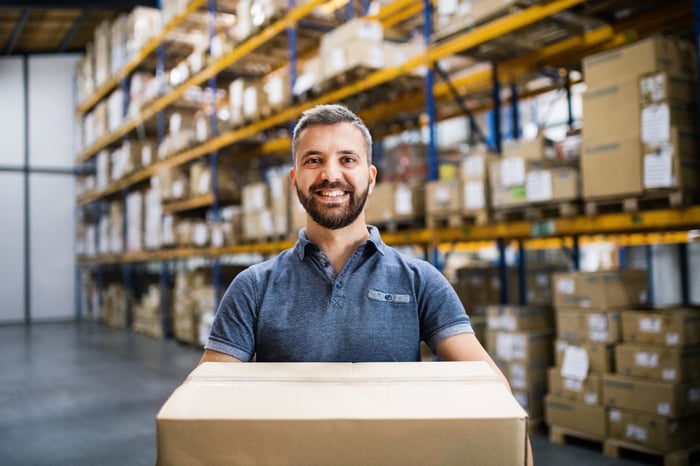 Don't dismiss the achievement. Companies that supposedly have vaunted reputations for treating their employees well, such as Starbucks (SBUX 0.23%), Chick-fil-A, IKEA, and Nordstrom (JWN 0.98%) -- all of which have appeared on Glassdoor's list in previous years -- didn't make the cut this time around.

So, what makes Costco so special?

Employing 195,000 workers in its 671 warehouse clubs, Costco Wholesale is the world's largest club operator. Wal-Mart (WMT -0.20%), the second biggest operator, has 643 warehouse clubs in the U.S. and Puerto Rico.

Costco's philosophy toward its employees reflects the liberal sensibilities of its co-founder, Jim Sinegal, and is reflected by what I believe are 6 reasons employees have ranked Costco as a top employer:

Those sorts of policies are what make Costco employees loyal, giving it what it says is the lowest employee turnover rates in the industry.

That's translated into consistent growth in its business. Revenues at Costco have grown 9% annually on average for the past decade with profits rising by a like amount. And though sales for its fiscal 2015 first quarter rose at a slightly slower pace, or 7%, same store sales were up a health 6%, and once the effects of lower fuel prices were removed (Costco also sells gas at many of its warehouses), comps were 7% higher year over year. 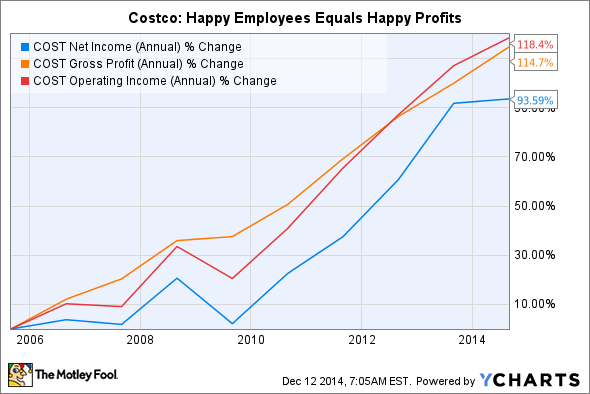 Yet, interestingly, Costco has lower levels of profitability than its rivals.

Although Costco is often held up in a better light than Wal-Mart, they really are two very different businesses that perhaps shouldn't be compared.

When you include all of Wal-Mart's store formats, it has 10 times as many as Costco, while carrying 140,000 SKUs compared to just 4,000 at Costco. Wal-Mart also employs some 1.4 million total employees. Moreover, Costco caters to a more well-to-do clientele than does Wal-Mart. It's average shopper has an average annual income of $85,000; Wal-Mart's are in the medium- to low-income wage scale.

In short, Costco Wholesale can afford to treat its employees better, and it does, which is why they love working there.

But they and investors should be aware of coming challenges. For example, new forms of competition are on the horizon, with both Wal-Mart and Amazon.com (AMZN -0.05%) launching online grocery shopping that plays more to the rising millennial and iGen generations who are more digitally connected and willing to buy goods and services online.

Yet with consumers remaining price sensitive, they'll continue to respond to the discount pricing it offers. Costco's membership renewal rates of 91% in the U.S. (and 87% worldwide ) are a testament to the loyalty not only employees have with the retailer but its customers, too.

It seems there are many good reasons why Costco Wholesale showed up on Glassdoor's 2015 Top 50 Best Places to Work four years in a row, and it won't surprise me in the least to see it reprise its role next year, too.

Follow Rich Duprey's coverage of all the retailing industry's most important news and developments. He has no position in any stocks mentioned. The Motley Fool recommends Amazon.com, Costco Wholesale, Nordstrom, and Starbucks. The Motley Fool owns shares of Amazon.com, Costco Wholesale, and Starbucks. Try any of our Foolish newsletter services free for 30 days. We Fools may not all hold the same opinions, but we all believe that considering a diverse range of insights makes us better investors. The Motley Fool has a disclosure policy.