Amazon (NASDAQ:AMZN) shareholders have had a tough 2014. The stock is down by more than 23% year to date, as investors and analysts seem to be losing their patience with the company's persistent losses.

In a recent interview with Business Insider, Amazon CEO Jeff Bezos offered some very interesting insights regarding Amazon and its ability to make money, including a remarkable quote from Warren Buffett himself.

Bezos' illustrative response explains why company is operating in the red. He said that Amazon did in fact turn a profit in the past, but the company decided to invest its cash flows in promising new ventures which are currently unprofitable.

Bezos compared Amazon to a company which built a lucrative and well-established lemonade stand, and is now investing those profits in different initiatives like a hamburger stand, a hot dog stand, and so on. In this example, the profitable lemonade stand is probably Amazon's online retail business, and the money-burning initiatives could be areas like hardware, digital content, and cloud computing, among others.

Amazon had a net profit margin in the range of 3% to 4% from 2006 to 2011, a level of profitability which is roughly in line with the profit margins produced by big retailers like Wal-Mart (NYSE:WMT) or Target (NYSE:TGT). This was before Amazon started investing money in new ventures. 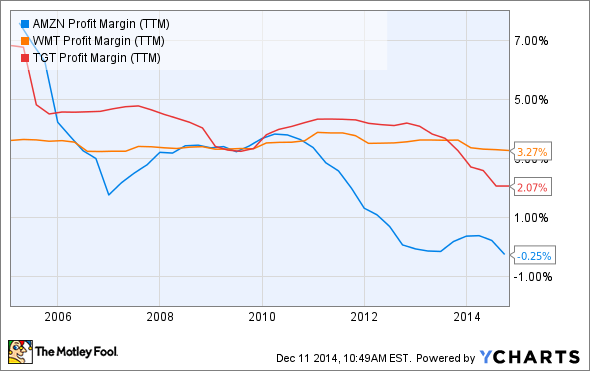 This distinction is quite important in terms of analyzing Amazon and its potential as an investment in the long term. In the best case scenario, those unprofitable divisions could become cash flow positive in the future. If that does not happen, Amazon can shut them down, or at least reduce the amounts of money it allocates to these projects.

Amazon does not offer much visibility regarding when and how the company could turn a profit, but Bezos is being quite clear: the company is losing money because it's investing for growth, not because the business in inherently unprofitable.

Jeff Bezos quotes Warren Buffett
From Bezos' point of view, the fact that Amazon is currently unprofitable is no reason to sell the stock. Bezos believes that investors come in all shapes and sizes; while some prefer stable companies with predictable earnings, others are more inclined toward innovative and dynamic businesses that invest their capital in exciting growth opportunities.

Amazon has been remarkably clear about its philosophy and strategy right from the beginning. From the company's first letter to shareholders in 1977:

We first measure ourselves in terms of the metrics most indicative of our market leadership: customer and revenue growth, the degree to which our customers continue to purchase from us on a repeat basis, and the strength of our brand. We have invested and will continue to invest aggressively to expand and leverage our customer base, brand, and infrastructure as we move to establish an enduring franchise.

Because of our emphasis on the long term, we may make decisions and weigh trade-offs differently than some companies. Accordingly, we want to share with you our fundamental management and decision-making approach so that you, our shareholders, may confirm that it is consistent with your investment philosophy.

We will make bold rather than timid investment decisions where we see a sufficient probability of gaining market leadership advantages. Some of these investments will pay off, others will not, and we will have learned another valuable lesson in either case.

Amazon is an aggressive growth company which prioritizes long-term opportunities for innovation and disruption over short-term profit margins. The strategy is uncertain and risky, and this means Amazon is clearly not the right choice for investors who want to own companies making consistent and predictable earnings.

However, Jeff Bezos has been straightforward since the beginning. Amazon is a rock concert, and it has always been advertised as such.