Editor's note: A previous version of this article gave out-of-date weighting and total-return information for the S&P GSCI and its subindices and also inaccurately reflected their names. The author and the Fool regret the error.

Stock market investors have enjoyed a huge bull market ever since the end of the financial crisis, and it appears that stocks will once again post a winning year when 2014 comes to a close in a few weeks. For the commodities markets, however, it's been a much different story, with commodity prices in 2014 on track to suffer their worst loss since 2008. As much attention as crude oil has gotten lately, it's far from the only commodity weighing on the overall market for physical goods. Let's take a closer look at exactly what's been driving the declines in commodity prices in 2014 and whether they're likely to continue falling next year. 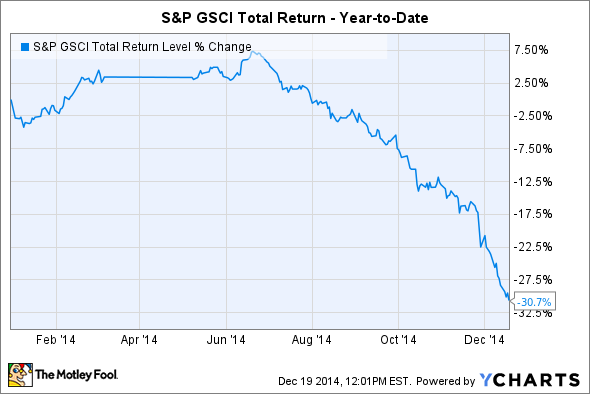 Why are commodity prices plunging?
As you can see in the graph above, commodity prices have been weak throughout the second half of the year, and the pace of the decline has accelerated dramatically in just the past month. When you look at the 2014 target weightings of the S&P GSCI, a popular commodity index, it's not hard to figure out the impact that crashing oil prices have had on the overall benchmark. According to those target weightings, which were established at the beginning of 2014, domestic crude made up more than 25% of the S&P GSCI, with international Brent crude representing more than 23%. All told, when you add in gasoline, heating oil, and natural gas, energy products made up more than 70% of the target weighting of the S&P GSCI. The energy component of the S&P GSCI was down almost 42% for the year as of Dec. 18.

Yet as important as energy is to the overall commodity market, it's not the only sector that struggled in 2014. After years of strength, agricultural commodities have also been under a lot of pressure this year, with the agriculture subcomponent of the S&P GSCI down 6% so far in 2014, even after having rebounded by more than 14% since the beginning of October. Sugar and cotton prices have weighed the most on the agricultural sector with declines of 29% and 20%, respectively, but corn is also down 10% for the year.

Certain industrial metals have also suffered at the hands of weak economic conditions abroad. Copper is down almost 13% so far this year, with the slowdown in Chinese growth weighing heavily on the metal because of its sensitivity to economic activity. As countries around the world have cut back on their spending on construction and infrastructure projects, demand for the key base metal has fallen. The same is true for silver, whose industrial purposes have also suffered from weak economies and has helped push silver prices down nearly 19% year to date.

By themselves, these other commodities don't have a huge impact on the S&P GSCI. The target weightings for corn and copper at the beginning of 2014 were a bit more than 3% each, while  given that corn, wheat, and copper each have about 3% weightings in the index and sugar, cotton, and silver all had target weightings of less than 1.5%. Nevertheless, their performance shows that a pretty wide swath of the overall commodity sector had to retrench in 2014.

One of the key reasons commodities have struggled in 2014 is the strength of the U.S. dollar. Given the global demand for key commodities, it's important to look at the impact of foreign exchange rate fluctuations on the local prices for commodity products. In many nations, a rising dollar made commodities more expensive in local-currency terms, especially in hard-hit areas like Russia, where the plunging ruble more than offset the declines in U.S. dollar terms for many commodities. But as long as dollar strength continues -- which many economists believe is likely in 2015 -- then commodity prices will remain under pressure.

These commodity markets woke up in 2014
That said, not every commodity market suffered this year. Coffee prices exploded higher, with the S&P GSCI Coffee Index posting a 44% jump so far in 2014. A drought in key growing regions of Brazil sent prices spiking higher, and that has caused challenges for companies from coffeehouse giant Starbucks (NASDAQ:SBUX) to grocery-coffee provider J.M. Smucker (NYSE:SJM).

Beef prices also leaped higher, with gains of 18% and 32% in the markets for live and feeder cattle, respectively. Poor weather conditions in many areas in which ranching is common helped support beef prices, and gains were extreme enough that cattle-rustling activity soared as the payoff for stealing herds increased.

Nevertheless, from an overall perspective, the attractiveness of the financial markets and the strength of the U.S. dollar left commodity investors feeling left out of the bull-market environment. Unfortunately, until key international economies in Europe and the Asia-Pacific region start firing on all cylinders again, those negative factors will be likely to continue indefinitely. As a result, commodity prices could likely continue to languish well into 2015 and beyond.