Despite Chevrolet recently taking home "Motor Trend"'s Truck of the Year award, it's trying to reclaim its lost glory in a segment that is all but dead. Can the Colorado spark midsize truck sales? 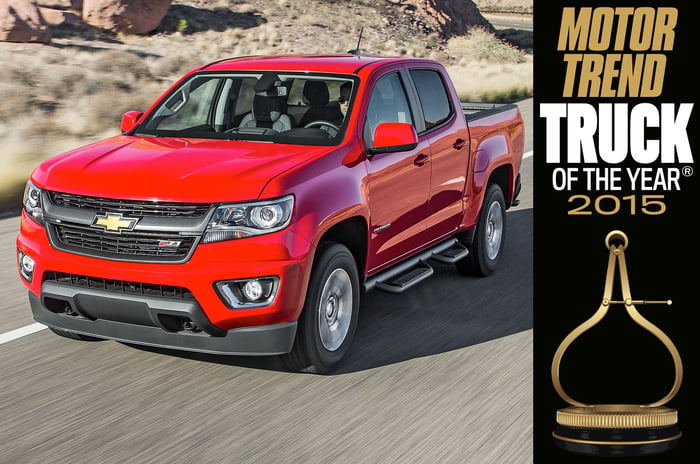 Motor Trend's Truck of the Year 2015: The Chevy Colorado.

"The Colorado may not be the biggest pickup in contention for the 2015 Motor Trend Truck of the Year, but it turns out to be the best in more of our judging categories than anything else."

If you follow the automotive industry, you probably expected Ford's (F 2.21%) aluminum-bodied 2015 F-150 to take home the award. In fact, you probably expected Ford to be ordering a new wall-size trophy case for all the awards it could win with its next-generation F-150. Instead, the full-size F-150 got beaten by the Chevy Colorado from crosstown rival General Motors (GM 2.65%), in the company's return to the nearly forgotten midsize truck segment, where sales have dropped significantly since 1999 and pale in comparison to sales of full-size trucks. Here's a look at how the Colorado came out on top, and at whether it matters in the end.

Is the midsize Colorado a big deal?
The folks at Motor Trend were thoroughly impressed with the Chevy Colorado, and ranked it higher than the six other competing trucks for 2015.

Motor Trend put the competing trucks through the paces before choosing a winner that performed the best in six categories: design advancement, engineering excellence, efficiency, safety, value, and performance of intended function.

In what the editors characterized as an unusual unanimous vote, Motor Trend dubbed the Colorado the truck of the year. "Colorado is a smart, capable, and refreshingly honest truck that makes a strong value and efficiency statement. It's perfectly sized and suited for the needs of many of today's truck users," Edward Loh, Motor Trend's editor-in-chief, said in a General Motors press release.

In addition to these attributes, the Colorado will certainly find its fans among consumers looking for a slightly smaller, and much more affordable, ride -- according to Automotive.com, 2015 Colorado pricing starts at $20,995, which is roughly half the price of a comparable full-size truck.

How much does it matter?
While the award's value is debatable, you can't argue how important trucks are to Detroit automakers. Ford's F-Series and GM's Chevy Silverado are perennially the two best-selling vehicles in the United States, and full-size trucks bring in the majority of the automakers' profits. For Ford, GM, and even Fiat Chrysler, winning over consumers to their line of trucks is unquestionably a huge deal.

Furthermore, while Motor Trend has had its say on trucks, other awards will be split among many of the same competitors. For instance, just recently Ford's 2015 F-150 was dubbed Popular Science's Grand Winner in the automotive category for its "Best of What's New." The Blue Oval's aluminum-bodied truck was also named 2014's Truck of Texas at the recent Texas Auto Writers Association Truck Rodeo; considering Texas is the biggest market for full-size trucks, that's nothing to sneeze at. Kelley Blue Book went as far as to call the F-150 an Overall Best Buy and Truck Best Buy.

The real question here is whether the midsize or full-size segment wins incremental sales in the end. For instance, Ford and Fiat Chrysler's Dodge have discontinued, respectively, their Ranger and Dakota midsize trucks. They are now focused on making their full-size trucks more fuel-efficient, yet highly capable towing vehicles, to keep the higher transaction prices and margins typically associated with the full-size segment.

On the flip side, General Motors has returned to the midsize market despite the segment's shrinking sales and thinner profit margins, and Toyota never left the segment, in hopes of luring first-time truck buyers to its brand to later step them up to its full-size trucks -- which have failed to gain sales traction in the U.S. market. It's possible that new midsize trucks could re-spark a segment long left for dead. See below to compare the segments' sales. 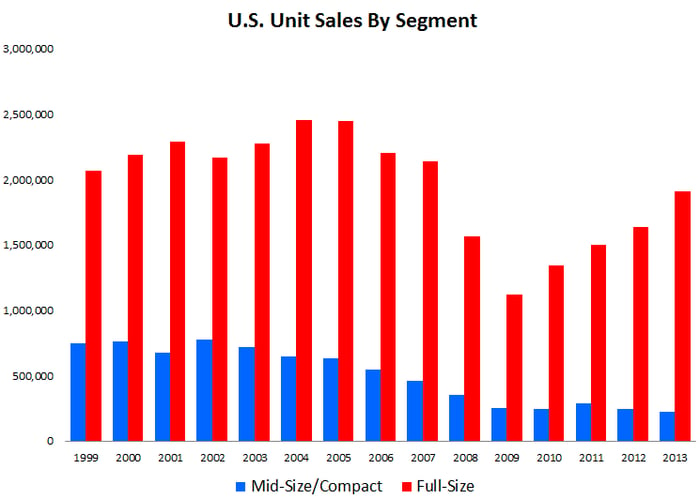 Ford took a risk going all-in with a lighter full-size F-150, which required retooling two plants that produce America's best-selling truck. But did it make a mistake in discontinuing the Ranger and ignoring the midsize segment while the Colorado is making a comeback? That's yet to be seen, but it appears the Colorado will give the midsize segment a legitimate shot to regain some of its lost glory. Motor Trend's award at the very least signals the Colorado is a good enough product to give consumers a much more difficult decision when purchasing a new truck.