Please ensure Javascript is enabled for purposes of website accessibility
Free Article Join Over 1 Million Premium Members And Get More In-Depth Stock Guidance and Research
By Demitri Kalogeropoulos - Dec 15, 2014 at 8:26AM

It can be expensive to eat healthy at home, but that spells opportunity for Costco.

It's a tough operating environment in retail right now -- not that Costco ( COST 0.65% ) investors would know anything about it. The warehouse giant this week made it look easy by posting another quarter of market-thumping revenue growth. Sales rose by 7% in existing U.S. stores. And that's a result that competitors from Whole Foods to Wal-Mart just couldn't touch.

The organic food opportunity
Costco's membership model is clearly resonating with customers on everything from televisions to bulk paper products. But there's one area that likely stood out from all the other grocery departments: organic food. Costco has targeted that category as a key growth opportunity, and not just because so many shoppers are choosing these healthier products. The warehouser also likes organic groceries because they cost more than other comparable food items.

However, Costco doesn't see that higher price point as an invitation to goose profits, like many other retailers do. Instead it's a chance to deliver bigger savings and thereby win loyal members. In other words, organic food offers a nice showcase of Costco's strength as a price leader.

Here's how Chief Financial Officer Richard Galanti explained the strategy back in October: "We can generally provide a better savings than others [in organic] because other retailers sometimes will use it as an ability to get more margins, and so we show greater savings."

Amazon.com's CEO Jeff Bezos put it another way when he said, "Your margin is my opportunity."

Winning market share
That explains why at least some of Costco's recent organic food sales gains seem to be coming at the expense of Whole Foods. The organic food grocer sports a 4% profit margin, which is huge by grocery standards. Kroger and Costco, by comparison, both stay consistently below 2% of sales by that metric.

Meanwhile, Whole Foods has seen its comps growth slow for five straight quarters as Costco and others fight to capitalize on the popularity of healthier grocery shopping. 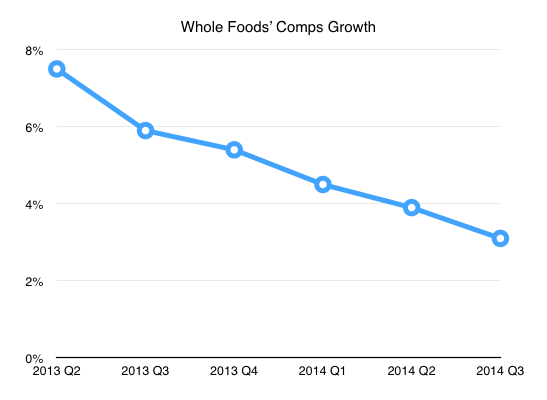 The other big advantage for Costco with this grocery category is that it helps attract younger shoppers. That's important for a business that skews heavily toward the higher demographic numbers for both income and age.

Management has had success lately in targeting younger shoppers with deals like a membership discount offered through LivingSocial. But executives know that millenials prefer organics at an even higher rate than its current membership base. So Costco will have to keep stocking plenty of organic food choices at attractive prices if it wants to grow its health-conscious grocery converts into long-term members.