While many stocks experience a series of ups and down throughout the year, it's been quite a ride for Freescale Semiconductors (NYSE: FSL). The stock's currently up more than 53% year-to-date, and the coming year brings some big prospects for the company. 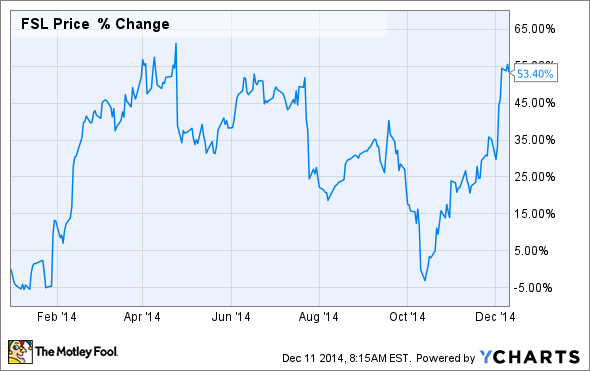 So what took Freescale on this wild ride this year? Let's take a look:

Start with a bang
The company kicked off the year with a strong Q4 2013 earnings report at the end of January. Freescale increased revenue by 13% year-over-year to $1.08 billion, and beat analysts' earnings expectations. The company also posted a strong guidance for the fiscal year, providing confidence for the coming quarters.

While it wasn't enough to send the stock shooting up, the news put the company on a strong footing at the start of the year.

More stock, less debt
In February, Freescale offered up an additional 35 million shares, and used to the extra cash to help pay off some of the company's debts. Earlier this year Freescale had about $6.5 billion worth of debt, which has been weighing down profits for years.

In the third quarter the company paid off $109 million in debt and is expected to pay off an additional $100 million in Q4. In addition to paying down current obligations, the company said about 90% of its debt won't mature until 2020, leaving the company more time to pay off remaining debt over the next few years.

Of course paying down debt is great, but most Freescale investors may not have liked the fact that their shares were diluted when the additional stock was offered. Over the year though, it appears that didn't curb the overall investor enthusiasm for the stock.

This certainly helped
While the debt reduction helped spur on Freescale's rising stock price, the company's strong sales in its key businesses played a major part as well.

The company makes about 44% of its revenue from the microcontrollers it makes for the auto industry, and in Q1 those unit sales were up 20% year-over-year. The auto industry saw light vehicle sales go from 15.6 million last year to an expected 16.4 million for 2014 -- the most since 2006. That increase has helped push Freescale's automotive microcontroller sales up.

Evercore Partners bumped up its Freescale rating to a "buy" a few months ago because it expects strong automotive and general microcontroller sales for the next two years.

Looking ahead
I don't know if it was investors being skittish, but the volatility of the stock since January makes me believe the coming year could bring some similar ups and downs as well. I don't think that's problematic for the company, but investors should keep in mind this stock can make big moves (both ways) very quickly, and they should be ready to stomach the changes.

As for Freescale's key businesses, things are looking good for the coming year. Steven Szakaly, the chief economist for the National Automobile Dealers Association, told Automotive News recently that he expects auto sales of 16.9 million in 2015 and between 16.5 million and 17 million for 2016. If this year's 15 million auto sales were good for Freescale's largest business segment, then the coming years should be even better.

In addition to that, China is continually expanding its TD-LTE connections, something Freescale significantly benefits from. "A lot of our revenue growth is driven by LTE, especially from China," Tareq Bustami, vice president of product management of Freescale Semiconductor's digital networking group, told FierceWireless earlier this year. China Mobile -- the world's largest wireless carrier -- is expected to expand its TD-LTE footprint in 2015, which should be more good news for Freescale's digital networking group.

While the company still holds a substantial amount of debt, Freescale has proven that it's trying to manage that burden efficiently while increasing sales at the same time. With strong automotive and LTE network growth forecasts for 2015, I'd expect Freescale to continue its growth, though maybe not as fast and not without some major bumps along the way.