Activision's biggest franchise gets the job done yet again in its 11th year.

Activision Blizzard (ATVI 0.88%) just accomplished in a few weeks what no other game publisher could do in the past 11 months. Since launching early last month, Call of Duty: Advanced Warfare has become the best-selling video game of 2014. That's according to data compiled by research firm NPD, which tracked sales of all titles in the U.S. sold through November. 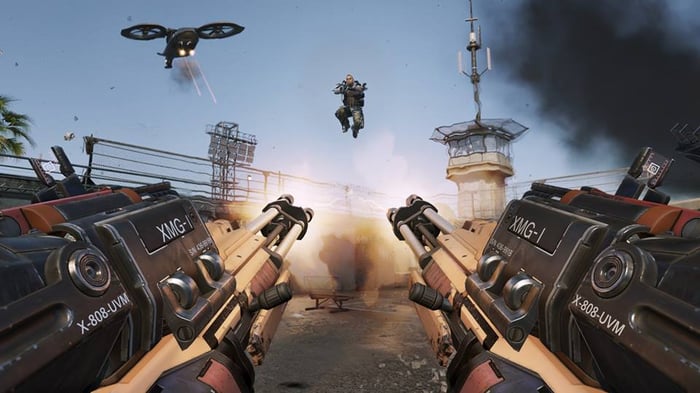 Impressive sales
Activision pointed out in a press release that the game has seen success across the board. Not only did it lead sales of all other titles on Microsoft's Xbox One and Sony's PlayStation 4, but Advanced Warfare was also the top seller for the prior generation versions of both consoles.

That result wasn't a huge surprise as Call of Duty games dominate the sales charts nearly every year. And this holiday season, the competition was weaker than usual after Electronic Arts delayed its Battlefield: Hardline shooter into the first quarter of 2015.

Still, that doesn't mean that gamers are diving headlong back into the aging Call of Duty franchise. Last year's installment, Ghosts, sold fewer copies than its predecessor. And since Activision hasn't indicated otherwise, Advanced Warfare's sales are presumably down in comparison to Ghosts. Admittedly, some of that dip is due to the console transition, but the world's most popular entertainment franchise is showing signs of age as it enters its second decade.

What it means for investors
However, there is plenty for investors to like about Activision's success with this game. For one, its blockbuster status justifies the extra investment the publisher put into the title. Advanced Warfare was the first title in the Call of Duty franchise to benefit from a three year, rather than two year, development cycle. And that extra polish no doubt helped the game log such a strong launch.

In fact, Advanced Warfare has seen higher levels of gamer engagement compared to last year, according to Activision. Investors can expect future titles in the franchise to enjoy the same, upgraded three year schedule, which leaves plenty of room for exploration of new gameplay and story directions.

Meanwhile, digital revenue will provide a bigger lift for Advanced Warfare than with any prior Call of Duty title. The game is already the biggest in console history in terms of digital sales. Because developer Sledgehammer Games had so much time to work on the title and now less pressure to immediately move into developing another installment, Advanced Warfare should get a boost from several rounds of major digital content releases in the next year. All of these downloadable sales should push Activision's profitability higher as they carry the highest margins of anything the publisher sells. Management also expects revenue this year to nearly match 2012's record high.

Activision didn't completely reinvigorate its biggest franchise with this year's installment. Regardless, Advanced Warfare still secured best-seller status and a successful launch. With a good strategy in place for future chapters, the company should be able to keep Call of Duty sales and profits pouring in for years to come.