Oil prices might still be plunging, but that's not stopping oil companies from looking for new sources of oil. This week a group led by ExxonMobil (NYSE:XOM) bid a record $559 million for a 657,300 acre offshore drilling lease about 300 miles off of the coast of Newfoundland. Exxon has a 40% interest in the record bid that included Suncor Energy (NYSE:SU) and ConocoPhillips (NYSE:COP), which are both 30% partners. The group is looking to follow in the footsteps of Statoil (NYSE:EQNR) and Husky Energy (TSX: HSE), which partnered to make three oil discoveries in the region in recent years.

Drilling down into the deal
The Exxon-led group is targeting the same Flemish Pass region where Statoil and Husky made the massive 600 million barrel Bay du Nord discovery along with two other significant oil finds. The following map denotes where these discoveries were made in relation to the existing producing fields. 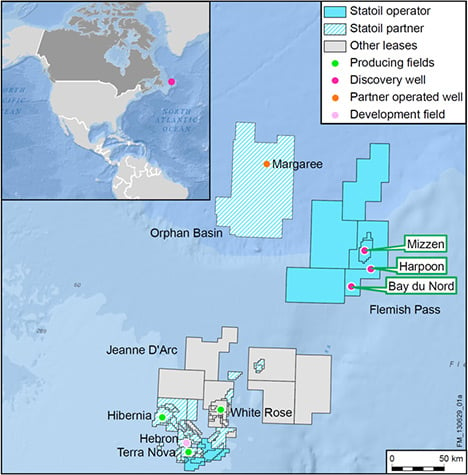 The Flemish Pass discoveries are compelling enough that the Exxon-led group is making a very big wager that there is more just waiting to be found. That's pretty clear considering that the bid not only was the highest on record for an offshore drilling parcel in Canada, but it was made after a significant plunge in oil prices. This points out just how long-term oil companies think as it will likely be years before the first wells are drilled and even longer before oil is produced, if any is discovered at all. We've seen a perfect example of this in the region already as Exxon's Hebron field was discovered 30 years ago, but due to a number of delays the multibillion dollar project wasn't sanctioned until last year and will finally deliver first oil in 2017.

Speaking of thinking long term, the Flemish Pass lease wasn't the only acreage that was bid on in the latest lease sale. Exxon and Suncor Energy also teamed up on a $21 million bid for acreage in the Carson basin, which is near the Flemish Pass and has similar geology. Meanwhile, Exxon also bid $16.7 million for a parcel in the Jeanne D'Arc region. While these regions aren't quite as promising at the moment as the Flemish Pass region, Exxon just couldn't pass up on the opportunity to snap up this acreage for future explorations given that there is potential for oil to be discovered on these leases as well.

Offshore drilling in Canada
Exxon and Suncor are no strangers to offshore drilling in Canada. ExxonMobil has been operating off of Canada's East Coast for 17 years now. It currently operates the Hibernia platform while it's leading the development of the Hebron project. Suncor Energy is a partner in both of those projects, and it also operates the Terra Nova field, where Exxon is a partner. These companies hope to leverage their extensive knowledge of the region to deliver future growth from what are hoped to be new discoveries in the Flemish Pass.

The newcomer here is ConocoPhillips, which only recently started efforts to search for oil and gas off of Canada's East Coast. This past summer it joined Suncor in acquiring half of Royal Dutch Shell's (NYSE:RDS.A)(NYSE:RDS.B) interest in four leases off of Nova Scotia. The group plans a billion dollar exploration program in the Shelburne Basin. However, aside from that new venture, the company does have extensive offshore drilling experience elsewhere in the world.

By joining together these three energy giants are hoping to not only offset exploration risk, but also use best practices to find and produce oil in the Flemish Pass region. All three companies have a long history of uncovering new sources of oil and the Flemish Pass offers a compelling new opportunity as it's virtually an untapped region. Further, given what Statoil and Husky have already uncovered, this looks like a bet that has a good chance of paying off, which is why the trio bid so much money for the lease.

Investor takeaway
ExxonMobil, ConocoPhillips, and Suncor Energy are making a massive bet that there's a major oil deposit just waiting to be uncovered off of Canada's East Coast. These companies know that finding oil can take decades so all three are willing to look past today's oil prices in order to profit from tomorrow's oil finds.