Oil companies hedge production in order to protect themselves from the volatility of oil prices. But not all hedges work the same. In fact, some hedges are now becoming a liability instead of insurance: Extensive use of three-way collars are leaving oil companies open to more downside than they expected, which is strangling their stock prices.

When insurance becomes a liability
Heading into the plunge in oil prices, most oil companies had substantial hedges in place. For example, Pioneer Natural Resources (NYSE:PXD) boasted that 85% of its 100,000 barrels of daily oil production was hedged through 2015, meaning it believed that it was largely insulated from a sudden drop in oil prices. However, those hedges plunge to just 45% in 2016, leaving the company more exposed if the drop in the price of oil endures for more than a year.

That being said, certain types of hedges offer more protection than others against a deep downdraft in oil prices. We see this in Pioneer Natural Resources, which is using two different types of oil hedges for its fourth-quarter production. 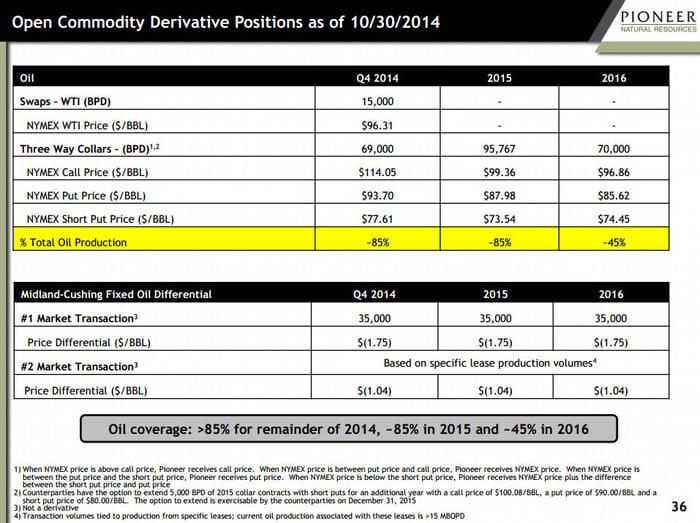 The chart shows that about 15% of the company's production is hedged by swaps, which locked in a $96.31 sale price for each of those barrels. However, most of the company's hedges are conducted through three-way collars, which involve selling a call, buying a put, and selling a put. These collars don't cost the company anything and provide upside to rising oil prices, as well as downside protection, to a point. The fact that the downside protection is limited is now becoming a point of contention asoil prices have now fallen well below the short put prices. This is exposing Pioneer Natural Resources, and others using this hedging technique, to unexpected downside risk.

The drop-off point
Pioneer Natural Resources' has absolutely no downside on its hedged volumes where it uses swaps. However, with the collars it is 100% protected if petroleum prices fall below $93.70 as long as oil stayed above the $77.61 per barrel of the sold put. The protection provided by these hedges weakens once oil prices fall below that point, meaning Pioneer Natural Resources receives less money per barrel as oil prices keep falling. We see this on the next slide, which illustrates a typical three-way collar. 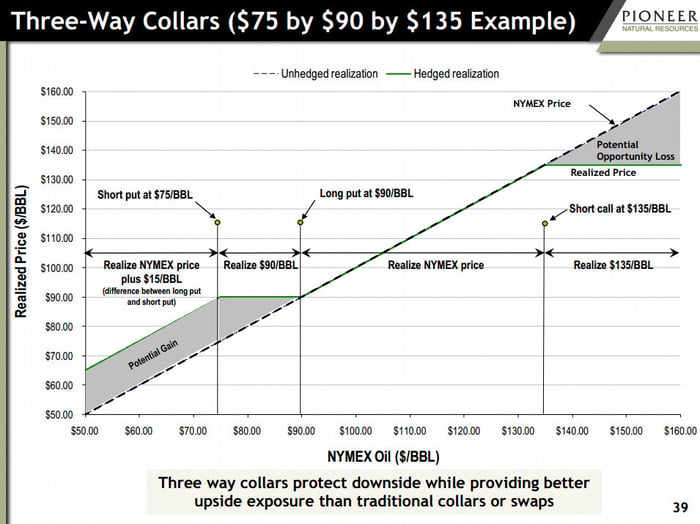 As that slide shows, the company's realized oil prices start to slip once oil prices fall below the price of the sold put. Putting this into real terms using Pioneer's fourth-quarter hedges, once the price of oil dips below the sold put the company no longer realizes the full value of the $93.70 put. It is at that point that the losses on the sold put cut into the company's realized price allowing it to only realize up to the difference between the two puts for a maximum of $16.09 per barrel plus the NYMEX price.

To better illustrate this, I created the following chart, which shows how quickly the company's hedge protection weakens once oil prices fall below that $77.61 put strike price. 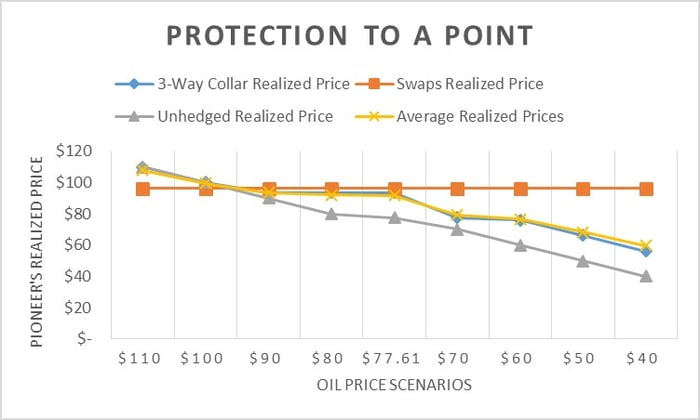 The yellow line is the important one to follow, as that is the blended average based on the company's fourth-quarter hedges and production. The company's hedges protect its realized oil prices from a fall in crude up to $77.61, but then its protection falls off. While Pioneer still makes a lot more money per barrel than it would if all of its production was unhedged, it's not making nearly as much as it would if it would have used more swaps.

Investor takeaway
In theory, three-way collars seem like a good way to protect oil production. They provide upside to oil prices above what oil companies could earn by using swaps to hedge production, while limiting downside to a 17% drop in oil prices, in Pioneer's case, below the price of the puts the company bought. However, by looking for extra upside, Pioneer and other companies added a risk element to the downside, which has been exposed by the major downdraft in oil prices. Oil companies are finding out the hard way that instead of protecting production, three-way collars are strangling them with much more downside risk than anyone expected.