Adobe Systems (NASDAQ:ADBE) stock is currently trading near its 52-week high, helped by a solid 9% pop following its better-than-expected fourth quarter earnings announcement on Friday. But is now a good time to buy shares of the creative software specialist? I think so.

But not everybody feels the same way. At first glance, Adobe looks expensive at around 146 times trailing 12-month earnings, and has handily outpaced the broader market's returns so far in 2014: 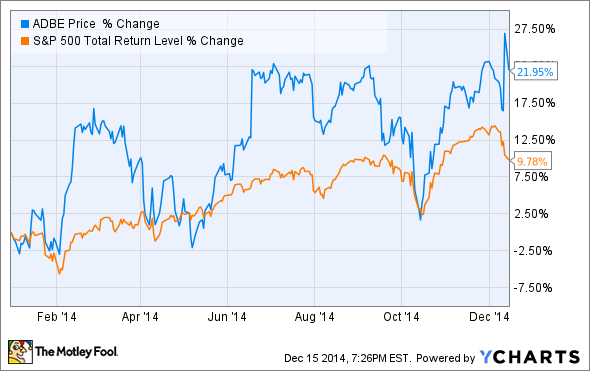 What's more, some skeptics view its quarterly results as underwhelming. Only a few days ago, Adobe announced fiscal fourth quarter revenue climbed an anemic 3% year over year to $1.073 billion. And though that translated to a 12.5% jump in earnings per share to $0.36, the latter figure was bolstered in part by Adobe's decision to spend $689 million to repurchase 10.9 million shares of common stock during the year, or an average price of roughly $63.21 per share.

To its credit, however, analysts were only expecting Adobe to achieve fiscal Q4 earnings of $0.30 per share on sales of $1.06 billion. And those repurchases currently look like a brilliant move, with shares of Adobe trading around $73.50 per share as of this writing.

Adobe has reached a turning point
But I've also been beating the "buy" drum for the better part of this year. So why should investors consider picking up Adobe Systems stock today?

Look no further than Adobe's ongoing business transition, which primarily involves moving away from traditional, license-based software, and toward a cloud-based subscription model. That involved some pain over the near term, as fiscal Q2 marked the last quarter of any meaningful perpetual CS6 software revenue. But when when all was said and done in fiscal 2014, Adobe exited the year with an impressive 3.45 million Creative Cloud subscriptions, which was more than 400,000 ahead of the initial target management provided a year ago. Better yet, Adobe has added sequentially more Creative Cloud subscribers with each passing quarter, including 405,000 subscribers in fiscal Q1, 464,000 in Q2, 502,000 in Q3, and 644,000 in its most recent three month period.

Better better yet, management last week stated they expect total Creative Cloud subscriptions to grow another 70% in fiscal 2015, to roughly 5.9 million. Simple arithmetic tells us that's an average of 612,500 subscribers per quarter, but I wouldn't be the least bit surprised if management is once again under-promising with the aim of over-delivering. For now, though, Adobe expects subscriptions to fall sequentially in Q1 due to regular seasonality, then resume sequential growth in the second, third, and fourth quarters.

Meanwhile, Adobe Marketing Cloud momentum appeared to wane slightly in Q4, with revenue rising 4.4% year over year to $330 million. But that was also inline with typical seasonality. Adobe touted record bookings for the high-margin, cloud-based product, which were "well ahead" of its 30% annual growth target. In fiscal 2015, Adobe is maintaining that 30% goal, which should result in annual reported revenue growth of 25%.

And there is another wildcard here: Adobe also announced last week it has agreed to acquire stock photo specialist Fotolia for $800 million, calling it a "vibrant marketplace" aimed at Creative Cloud subscribers. Fotolia should add around $75 million in fiscal 2015 revenue, and should be neutral to adjusted FY15 earnings. After that, however, Fotolia will be accretive to earnings in fiscal 2016. And for those concerned about the size of the purchase, keep in mind Adobe generated $400 million in operating cash flow last quarter alone, and ended the year with over $1.1 billion in cash and equivalents and $2.6 billion in short-term investments. In short, Adobe has ample funds to complete such an acquisition without taking on additional debt.

As a result, Adobe expects revenue and earnings to grow sequentially with each quarter during the year, and is continuing to target compound annual revenue growth between fiscal 2014 and fiscal 2016 of 20%. That means fiscal 2015 revenue and adjusted earnings of $4.85 billion and $2.05 per share, respectively -- the latter of which is a nickel ahead of the per share earnings target Adobe outlined around this time last year. For perspective, Adobe management also stated during in last year's call they were targeting fiscal 2016 earnings of "at least $3" per share, which effectively nullifies the argument against its sky-high trailing P/E ratio.

In the end, if Adobe can continue making steady progress toward achieving those targets, Adobe stock should have plenty more gains in store for patient, long-term investors.