The news out of China was worse than Wall Street anticipated, which makes it the right time to jump in.

It's been big trouble in little China for Yum! Brands after yet another food scandal.

Yum! Brands (NYSE: YUM) caught Wall Street napping last week when it updated its fourth-quarter earnings guidance to say its recovery in China following yet another food scandal this past summer was progressing much slower than expected.

Yum! Brands gets a haircut
The owner of KFC, Pizza Hut, and Taco Bell downgraded its full-year guidance for 6% to 10% earnings-per-share growth to mid-single digits. And while it had expected same-store sales in China to be negative, it now said they also would be down by middle single-digit rates for the year.

For analysts, this was a wake-up call. They said the drop in full-year comps implied those sales had fallen hard in the fourth quarter, perhaps by as much as 20% (Yum! apparently clarified the point at its investor day presentation that comps would drop by at least 15%).

Although I had expected the sharp drop in sales after Yum! Brands' third-quarter results, this doesn't mean the stock isn't attractive. In fact, now might be a great time to buy.

3 strikes and you're out?
Quick recap: late July finds Yum! Brands and McDonald's ( MCD -0.44% ) reeling from a scandal involving a supplier using tainted meat. While the burger chain was more reliant upon the supplier than Yum! (it was the sole supplier of certain products for McDonald's Japanese division), the scandal amounted to the third time in about two years that Yum! Brands was dealing with food quality issues.

But the scandal broke in the middle of the third quarter, so when the KFC and Pizza Hut chains saw comps tumble 14% and 11%, respectively, for the quarter, that should have been a sign the damage was much greater than it seemed. 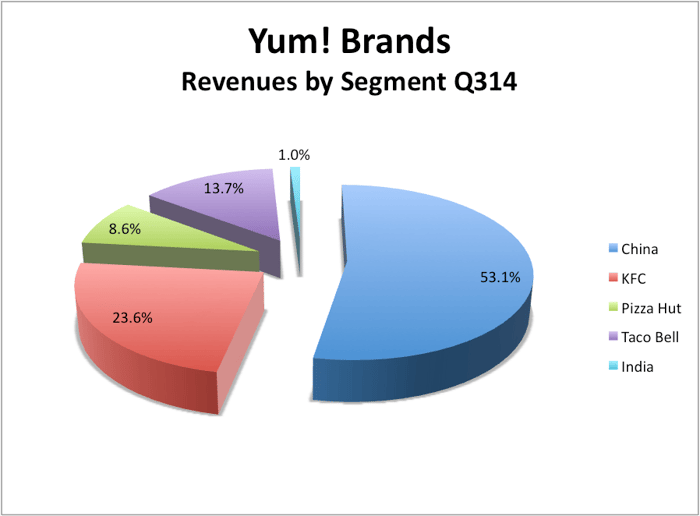 While management was saying Yum! was already rebounding, and Wall Street was buying into it, I cautioned investors that there was worse news to come.

Analysts think McDonald's actually fared better in the coming fourth quarter than Yum! Brands. With the Golden Arches' global same-store sales off 2.2% in November, they estimate McDonald's China comps will be down in the mid-single-digit range.

Now the chickens are coming home to roost because of that earlier rosy assessment by analysts: Yum! Brands' stock has fallen more than 6% on the news.

It's now a tasty morsel
But this now represents a good opportunity for investors. The stock had been running up on unreasonable expectations. Now, with the price cut and the reduced guidance, Yum! Brands is trading at about 21 times estimated 2015 earnings. That represents a discount to other fast-food and fast-casual chains such as Burger King Worldwide ( BKW.DL ), Buffalo Wild Wings ( BWLD ), and Chipotle Mexican Grill ( CMG -0.52% ).

Analysts at Stifel Research believe the situation in China provides a stick to push Yum! Brands to "de-risk" its exposure to the country, possibly spinning off its China division even.

There are now competing visions over which chain would make the best spinoff candidate.

However, that seems out of alignment with Yum!'s stated desire to be an international chain. Other analysts think Taco Bell would be a better spinoff candidate because it is almost wholly focused on the U.S., though Yum! did announce new expansion into India recently.

A whole other reason for enthusiasm
Therein lies the other leg of the bullish thesis. Yum! Brands is building out its global brand so that China will play an important but increasingly smaller role in its fortunes.

Currently, China accounts for more than half of Yum!'s revenue and 35% of its operating profit as of the third quarter. India brings just 1% of both. But Yum! plans on building out its operations in the country and anticipates India will drive substantial future growth for the company. With only two restaurants per million people in India (and China, too), compared with about 60 per million in the U.S., there's room still for significant expansion.

Next year will be another recovery year for Yum! Brands. But the shock to the system it got from the markets the other day was needed and provides investors with a long-term investment horizon a good buy-in opportunity.