The CFO of Williams Companies (NYSE:WMB), Don Chappel, recently spoke at an investor conference where he talked about the once-in-a-generation opportunity in natural gas that's just waiting to be seized. Its this opportunity that is driving his company to merge the two MLPs it controls, Williams Partners L.P. (NYSE: WPZ) and Access Midstream Partners LP (NYSE: ACMP), in a deal that's expected to close early next year. By combining these two companies, Williams will be in a much better position to create value from the coming super cycle in natural gas.

Supply-side economics
Chappel spent the early part of his remarks pointing out the growth potential for natural gas in America as well as for Williams. He extolled the virtues of natural gas by saying that,

And our focus on natural gas is really driven by our belief and conviction that natural gas is the fuel source that's going to continue to grow in this country for the next couple of decades by virtue of the fact that it is abundant and it's cheap and it's clean and it's replacing other sources of energies that are less abundant, [...] more expensive and less clean.

Chappel then made some direct comments referencing this slide:

So you can see here, and this is Wood Mac data, but shows us going from about 70 BCF a day here in 2014 to over 105 BCF by 2030. So you can see a pretty modest growth rate and it's a 3% CAGR but it's a 3% CAGR for another 15 years or so which compounds to another 40 BCF of gas demand up almost 60% and, again, our strategy is really built around growth in gas demand and in gas supply and so with this kind of growth we expect to be able to put a lot of very attractive projects on the books that will drive long-term, both near-term and long-term increases in shareholder value.

As he notes, Williams sees an incredible opportunity ahead of it to invest in attractive projects that will create a lot of value for its investors. As the slide above noted, the company is well positioned in every region that's expected to deliver growth in supplies of natural gas. Moreover, the overlap between Williams Partners and Access is particularly compelling in key growth regions like the Northeast and the Rockies, which is why combining these companies is important because it is expected to enable Williams to better compete for new opportunities as they arise. Mr. Chappel noted these two areas in particular as he followed up his previous comments by saying:

You can see there on the graph that the top colored area is the Northeast and that's really the Marcellus/Utica and you can see how much growth we expect there and we'll show you how much we focused on that and the key assets that we have in place to take full advantage of the expected growth. But as well, just the line below that you can see growth in the Rockies as well and many of the other basins in which we operate. Over on the right side you can see Williams ownership pre ACMP, on the left and the Access positions on the right and from that you can really see that we really operate in all, or almost all, of the important natural gas basins here in North America.

Clearly, the company sees itself as being well positioned to create value as it grows its asset base to service the supply side of the growth equation. However, there's another side of all this and that's the demand side where Williams also sees value creating opportunities. 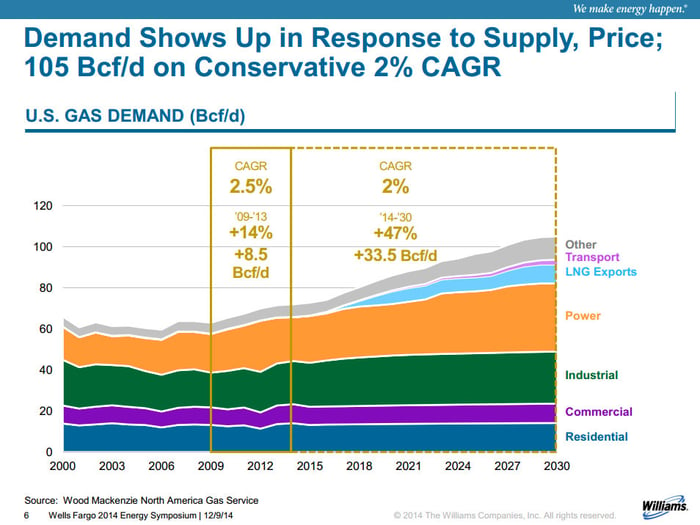 Chappel commented on this slide by saying:

Where is all of that gas going to grow? Again, this is a Wood Mac slide that shows where gas is going to go and the bulk of the growth is in power, LNG exports and a variety of other needs. So, again, we're seeing industrial, we're seeing potential methanol export as well but, again, tremendous growth driven by the same factors as I discussed earlier.

As he notes the biggest demand driver is expected to be from new natural gas power plants, which are replacing coal-fired plants in the U.S. However, he also points out that demand is coming from LNG exports as well as from industrial users. These end users will require plenty of natural gas pipelines to receive gas for consumption. Williams wants to be the partner chosen by these customers to meet those future needs as the company wants to capture value creating opportunities to invest in new natural gas infrastructure to support demand growth.

Investor takeaway
Williams Companies sees a very bright future in natural gas. That's why it could potentially invest upward of $30 billion through the end of the decade on growth projects as it captures new opportunities on both the supply and demand side of the equation. The company sees a once-in-a-generation industry super cycle in natural gas, and it believes it's in the right places and at the right time to deliver a lot of value to its investors in the years ahead.