Down Under makes market No. 17 for electric-car maker Tesla Motors (TSLA 4.67%) as it continues to rapidly expand across the globe. Now delivering vehicles in Australia, Tesla has followed through with every market it promised to deliver vehicles to in 2014. Here's what investors need to know.

Tesla's plans for Australia
Earlier this month, Tesla delivered its first nine vehicles in Australia. Deliveries for other customers, Tesla said, would begin the next day.

Tesla's first Australian retail store and service center was opened in St. Leonards, Sydney. The company says that by the end of 2015 it will also have a retail and service presence in Melbourne. Furthermore, Tesla says it will continue to hold test-drive events around the country.

"I just returned from our launch in Sydney and can certainly attest to the strength of the Australian market and the excitement of our new owners," Tesla spokeswoman Alexis Georgeson told The Motley Fool on Wednesday.

Key to making its electric cars both desirable and feasible, Tesla unveiled its Supercharging plans for the Australian market.

The Supercharging rollout begins with its just-opened locations at the Star and Darling Hotel site at Pyrmont in Sydney and its retail and service center in Sydney. 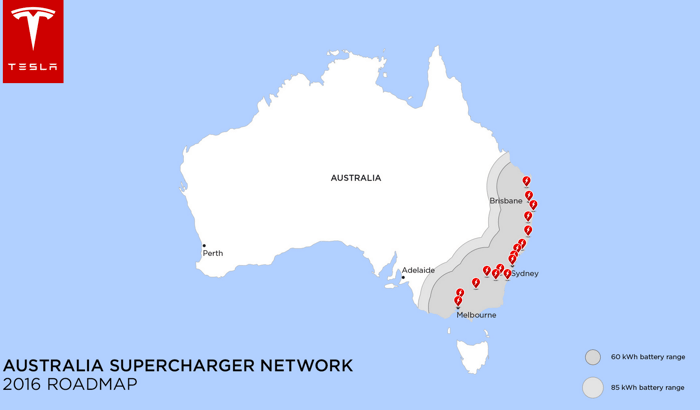 Data from VFACTS that shows just 153 electric vehicles delivered in Australia between 2011 and 2013 reveals just how new electric cars are to the market. Tesla's initial upbeat comments about the market, however, suggest that Tesla may be poised to fare well in the country despite very little familiarity with EVs there.

Besides Australia, here's the current list of countries Tesla currently sells vehicles in:

What's next for Tesla's international plans?
Australia finishes Tesla's announced international expansion plans for 2014. The company hasn't yet identified any countries that it plans on expanding to in 2015. This is information that will likely be unveiled in the company's fourth-quarter letter to shareholders at the end of January or beginning of February.

With Tesla now selling in many of the countries that have some of the biggest markets for luxury vehicles, my guess is the company will focus more on penetrating those markets further next year as opposed to expanding to many new markets.

Consider Tesla's recent store opening in Montreal, Canada. While Tesla has already been delivering vehicles in the country, earlier this month Tesla opened its largest sales, service, and delivery center in North America. The 45,000-foot location replaced a much smaller location in Laval, which the Montreal Gazette called a "Band-Aid solution for the market," suggesting it was always meant to be temporary.

The larger location in Montreal was prompted by growing interest in Tesla's vehicles in the region, Tesla senior vice-president of global sales Jerome Guillen told the Montreal Gazette. Opening stores in such areas could be Tesla's next phase of its expansion plans.

Tesla said in its most recent earnings call that its low penetration of retail and service centers is one of the levers it could pull to generate more demand, but it has no reason to do so until it can serve up the respective production.