Please ensure Javascript is enabled for purposes of website accessibility
Log In Help Join The Motley Fool
Free Article Join Over 1 Million Premium Members And Get More In-Depth Stock Guidance and Research
By Steve Symington – Dec 20, 2014 at 8:45AM

Not even Mickey D's can underperform this restaurant laggard.

Without a doubt, McDonald's (MCD -0.58%) has had a rough 2014. Earlier this month, the fast-food giant announced global comparable-store sales fell 2.2% in November, including a 4.6% drop in the U.S. That makes seven consecutive months of global declines. It should come as no surprise, then, that McDonald's stock touched a new one-year low during last week's trading.

There are plenty of other factors working against McDonald's, ranging from an increasingly complicated menu, a fundamental shift by diners toward healthier fast-casual concepts, and its dead-last ranking behind 20 other leading burger chains in a recent Consumer Reports taste survey.

But believe it or not, while McDonald's struggle may be the most widely publicized, it's far from the worst-performing restaurant chain out there. In fact, among all the publicly traded restaurants tracked by Nation's Restaurant News, several have fared significantly worse than Mickey D's of late.

During its most recent quarter, Romano's Macaroni Grill suffered a harrowing 8.5% decrease in comps. That brings Macaroni Grill's year-to-date comparable-sales decline to 5% -- and that's on top of a 6.5% fall last year dating from Ignite's April 9, 2013 acquisition of the chain. For perspective, when Ignite announced the acquisition, it was optimistically forecasting a 1% comparable-sales increase for the year.

Unfortunately, the casual-dining space -- to which most Italian concepts like Macaroni Grill belong -- has suffered more than its fair share as consumers are increasingly choosing more-convenient, less-expensive dining options. And in the process, competition has only grown more intense given the scale, financial resources, and cost advantages enjoyed by larger chains like Darden Restaurants' (DRI -0.68%) Olive Garden.

Consequently, Romano's Macaroni Grill generates more than 35% of Ignite's revenue; so it was a big driver of the company's $6.5 million net loss last quarter. As it stands, Ignite Restaurant Group stock has fallen by more than a third in 2014, badly lagging the performance of not only McDonald's, but also its peers and the broader market: 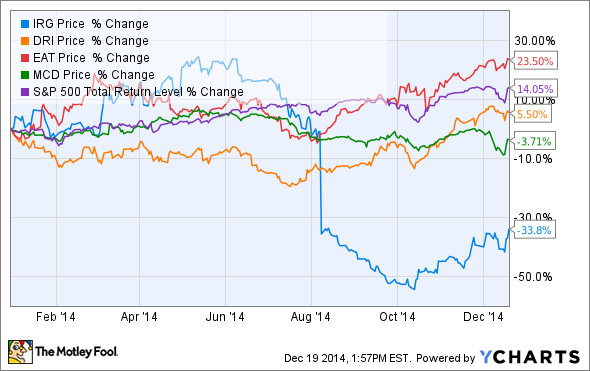 To its credit, Ignite stated Macaroni Grill's most-recent decline "reflected the conscious decision to walk away from unprofitable sales by not repeating the heavy discounting we tested in the prior year." What's more, Ignite hopes to see positive results from a new counter-service initiative it kicked off at Macaroni Grill in October -- a clear shot at trying to gain share during lunchtime, and win business from the convenience-seeking crowd.

At the same time, Ignite isn't exactly sending signals of confidence considering they've already closed 19 Macaroni Grill locations during the past year. What's more, it's not as though those physical locations don't have promise; Ignite is planning to open as many as six of its Brick House Tavern concepts via conversion of closed Macaroni Grill locations in 2015. It's hard to blame them, as Brick House Tavern achieved a 7.5% increase in comparable sales last quarter. And why try to revive a struggling, mature restaurant concept when you can shoehorn a younger, thriving one in its place?

If one thing is clear, it's that Ignite has plenty of work to do if it wants Romano's Macaroni Grill to succeed. But given its current status as the single worst-performing restaurant chain, it could have nowhere to go but up in 2015.

Steve Symington has no position in any stocks mentioned. The Motley Fool recommends McDonald's. We Fools may not all hold the same opinions, but we all believe that considering a diverse range of insights makes us better investors. The Motley Fool has a disclosure policy.