It's a very bittersweet moment in Europe for Ford Motor Company (NYSE:F), its investors, and the employees at its Belgium plant. It's bitter in the sense that Ford is shutting down a factory in Europe for the first time in more than 10 years, a plant that had produced over 14 million vehicles over the past five decades. It's also bitter for employees, as roughly 4,000 workers will lose their jobs. Unfortunately, this is the world we live in, especially in a cyclical automotive industry.

Unfortunate necessity
Automotive News reports that, according to the University of Hasselt, the loss of jobs will extend beyond the more than 4,000 who worked at the factory, costing nearly 12,000 jobs in the region due to Ford's suppliers having to make cuts. This is a necessary evil, though, when you consider the losses that Ford has incurred. The red below denotes the earnings per share lost because of Ford's operations in Europe. 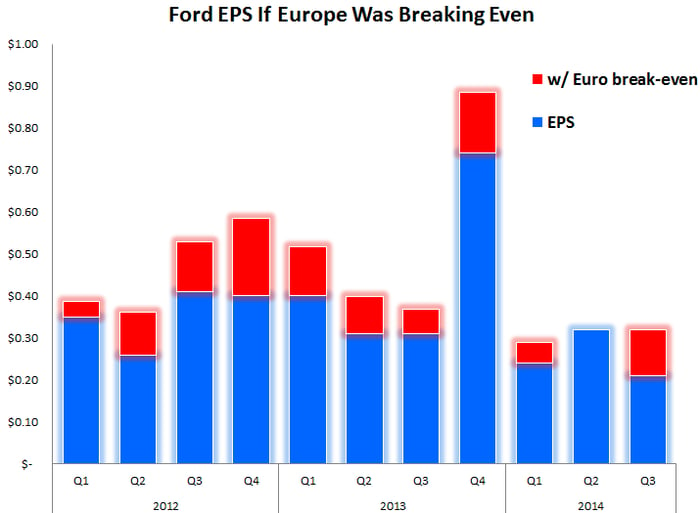 Graph by author. Calculated as quarterly fully diluted EPS, divided by basic shares outstanding for the most recent quarter.

As you can see, if Ford had simply broke even in Europe over the past few years, it would have added a significant chunk back to its profitability. In fact, Ford has lost nearly $4 billion in its European operations since the beginning of 2012. That's roughly 26% of its fully diluted earnings per share wiped out in that time frame.

The closing of Ford's plant in Belgium alone will save $400 million a year or more, or roughly $0.10 per share annually. The plan all along was for Ford to cut costs and trim down its production capacity to break even in Europe in 2015. Now management projects Ford will lose about $250 million in Europe next year, which is still a vast improvement from the roughly $1.5 billion lost last year, and the $1.7 billion in 2012.

The reason that Ford's progress in Europe has slowed down, despite its initiatives, is Russia.

Pass the vodka...
Europe's third-largest market has continued to spiral downward economically, and it's sent new-vehicle sales down right along with it. In addition to faltering sales, which Ford was counting on to help expand its reach in Europe, Ford's underfunded pension plan in Europe hasn't improved as quickly as it has here in North America.

That's primarily because Ford's pension obligations increase when interest rates are low, essentially forcing the automaker to contribute more cash when expected returns are lower. Because the U.S. has recovered from the Great Recession more quickly than Europe has, our interest rates and discount rates have increased, which has significantly lowered Ford's pension obligations here.

For context, Ford's pension plan was underfunded to the tune of $18.7 billion at the end of 2012. However, due to Ford pouring cash into the fund and to rising discount rates, that obligation was nearly cut in half at the end of 2013.

Despite Ford not being able to break even in Europe for the full-year 2015 as planned, there is a silver lining. Through June, more than 52% of Ford's sales were of new or significantly refreshed vehicles. While Ford was cutting production in Europe, its goal all along was not to cut back on the rate of vehicle refreshes, as some competitors had done.

To put it bluntly, newer designs sell better, and are more valuable in terms of their top- and bottom-line contribution. This should bode well for Ford's market share as its operations in Europe slowly, but surely, turn to profitability -- and when that happens, there will be a huge collective cheer coming from the Dearborn automaker and its investors.