Amazon's free cash flow doesn't reflect all of the investments that Amazon is making, and it has little bearing on the health of the business.

Amazon (AMZN 0.18%) CEO Jeff Bezos has long pointed to the free cash flow, not the net income, as the best way to measure the health of his online retail empire. Even as Amazon's net income has turned negative in recent periods, free cash flow has remained at a seemingly healthy level. 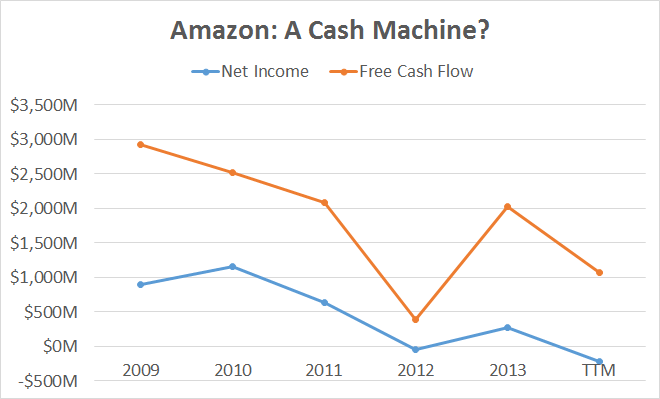 Most bullish arguments for Amazon ultimately boil down to pointing out this fact -- that Amazon is still managing to generate cash despite the losses that it's reporting on the income statement. But here's the thing: A company that's growing rapidly and investing heavily in its business through capital expenditures should be burning through nearly every dollar that it brings in. How has Amazon been able to do exactly the opposite, recording multibillion-dollar free cash flows despite its heavy investments?

Pulling a fast one with capital leases
A company's free cash flow is simply the operating cash flow, which is all of the cash generated from operating the business, minus the capital expenditures, which is the cash used to buy property and equipment. When a company makes a capital investment, such as building a new distribution center in Amazon's case, the full cost is subtracted from the operating cash flow as it's spent in order to arrive at the free cash flow.

Capital expenditures are depreciated over their useful lifetimes, with the company taking a depreciation charge each year on the income statement. If Amazon spends $1 billion on a distribution center, for example, and the useful lifetime is 20 years, Amazon will record a $50 million expense annually, reducing the net income.

Meanwhile, the free cash flow will be reduced by the full $1 billion. It should now be clear that a company increasing its capital expenditures each year should typically not report a free cash flow dramatically above the net income, excluding the effects of other items like stock-based compensation.

Amazon's capital expenditures have been increasing rapidly during the years, but so has depreciation. Both values have remained nearly equal to each other during the past five years. We know for a fact that Amazon is investing heavily in growth, building new distribution centers for its retail business, and new data centers for its cloud computing business. But annual capital expenditures being about the same size as the annual depreciation charge suggests that this capex is simply going toward maintaining the business, something that simply can't be true.

A look at Amazon's financial statements solves the mystery. Amazon is actually investing far more in its business than it appears, financing some of its investments through capital leases. The result is an inflated free cash flow that reflects almost nothing about the health of Amazon.

A capital lease is essentially a financing agreement between a buyer and a seller. Instead of paying the full amount for an asset up front in cash, the buyer pays for it over time, gaining ownership at the end of the repayment period. During the 12 months ending on Sept. 30, Amazon spent $4.6 billion on capital expenditures while financing another $3.4 billion through capital leases. In reality, Amazon acquired about $8 billion worth of assets while only reporting $4.6 billion in capex.

The way that capital leases are accounted for allows Amazon to artificially boost its free cash flow. When a company enters into a capital lease, this capital lease is treated like debt -- recorded on the balance sheet either as a line item or, as in Amazon's case, as part of the "other long-term liabilities" section. Because no cash changes hands at this point, this transaction is not treated as a capital expenditure.

Over the lifetime of the lease, the company makes payments. These payments are treated as repayments of long-term debt, showing up in the financing section of the cash flow statement. Because of this, the free cash flow calculation excludes these payments completely.

The kicker, though, is that the company gets to take a depreciation charge on the asset during this repayment period. This charge boosts the operating cash flow, thus boosting the free cash flow, as well. The free cash flow calculation, then, accounts for the benefit of asset ownership without accounting for the cost of that asset in the first place.

This is why Amazon's free cash flow is curiously positive despite the massive investments that the company is making. Here's what the free cash flow would look like if investments made through capital leases were treated as normal capex: 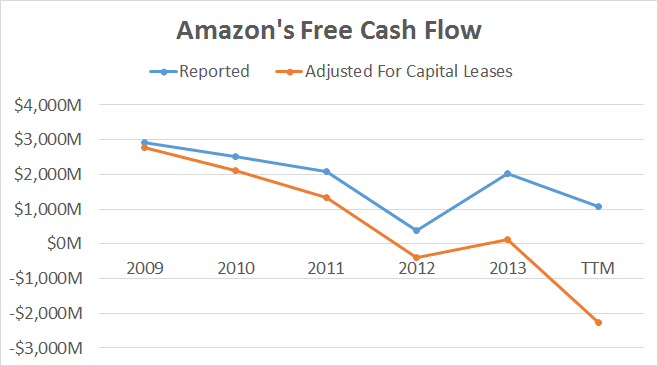 The truth is that Amazon isn't generating anywhere near enough cash from its business to make the kinds of investments that the company is making. Based on the capital lease repayment schedule in Amazon's 10-Q, these capital leases seem to be for fairly short-lifetime assets, perhaps related to the cloud computing business, because servers typically have a lifetime of a few years.

To put it simply, this isn't likely sustainable in the long term. Amazon cannot afford to keep doing what it's doing. If it continues to invest heavily through capital leases, its debt is going to keep piling up.

Amazon's free cash flow is a mirage - albeit, a legal and frequently practiced accounting method by many -- and it doesn't reflect all of the investments Amazon is making.