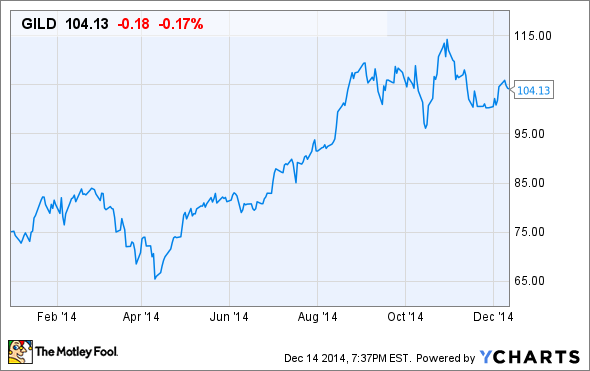 Despite last weeks' oil-induced swoon, the S&P 500 is still up by 8% for the year. But don't bother bragging about this to Gilead Sciences (NASDAQ:GILD) shareholders -- through the weekend, Gilead shares had nearly quintupled the broader market's return this year, with gains of 39%.

Sovaldi came to market first, and is an oral pill designed to eliminate the need for interferon in genotype 2 & 3 HCV patients. Interferon can cause flu-like symptoms throughout the duration of treatment, so this is a big step forward in improving patient quality of care. Yet Sovaldi is so much more. Sovaldi's cure rate, which is commonly referred to as its "sustained virologic response," is often 90% or higher, and represents a marked improvement from the prior standard of care.

Harvoni is a cocktail drug that's a mixture of Sovaldi and in-house compound ledipasvir. It's designed for genotype 1 HCV patients (the most common but hardest to treat group), and can be administered without interferon or a ribavirin. It's another step forward in convenience for HCV patients. In studies it, too, delivered extremely high SVR cure rates and for certain treatment-naïve genotype 1 patients can be administered as a full-course in as little as eight weeks!

We don't yet have exact sales totals on Harvoni since it was approved just two months ago, but through the first nine months of the year Sovaldi racked up an incredible $8.55 billion in sales. In other words Sovaldi became the quickest drug in history to ever reach $1 billion in sales.

But can this success be duplicated in 2015?

Challenges ahead
After adding $44 billion in market value year to date, it could be a struggle for Gilead to duplicate these gains if a few challenges come to the forefront.

For starters, there are a handful of HCV compounds waiting in the wings for their chance to claim a piece of the HCV market. AbbVie (NYSE:ABBV), for example, had its direct-acting antiviral known as Viekira Pak approved by the Food and Drug Administration this past Friday. In the six phase 3 trials presented as evidence of its efficacy, AbbVie's combo drug delivered SVRs ranging from 90%-100%.

By a similar token, Merck (NYSE:MRK) has a hepatitis C combo -- MK-5172 and MK-8742 -- which produced SVRs ranging from 90%-100% on genotype 1 HCV patients in April. As a breakthrough-designated therapy, Merck's combo is eligible for a priority review that could bring it to pharmacy shelves even quicker. It's possible that these therapies, if approved, could give Harvoni a run for its money.

Investors also need to be concerned about Congress and pharmacy benefits managers, who are clearly not pleased by Gilead's pricing on Sovaldi and Harvoni at $1,000 and $1,125 per pill. It's possible that physicians and PBMs may simply opt for AbbVie's direct-acting antiviral if it winds up being markedly cheaper than Harvoni or Sovaldi (although no one's sure where AbbVie will price its drug as of yet). This could negatively affect Gilead's HCV drug sales and potentially remove Sovladi or Harvoni from PBMs-approved medicines list.

I believe the answer is yes, but I'm hesitant to suggest it'll duplicate its huge gains from 2014 in 2015. However, I still suspect it has all the tools necessary to handily outperform the broader market in 2015.

Consider for a moment that through the first nine months of 2014 Gilead was only able to treat 117,000 patients with Sovaldi, yet the Centers for Disease Control and Prevention estimates they are 3.2 million HCV patients in the United States. Furthermore, the World Health Organization estimates there are 180 million people with HCV worldwide. In sum, there's more than enough room for three or four companies to establish themselves in the HCV space, especially if their curative rates are mostly 90% or higher. To me it signals that even if AbbVie's and Merck's combos make it to market, Gilead's sales will be just fine.

Also, don't forget about Stribild. Most investors are focused on the incredible potential of Harvoni and Sovaldi in HCV -- and with good reason -- but Stribild, Gilead's next-generation four-in-one HIV-1 drug, is on pace to cross $1.1 billion in sales in 2014, and may surpass $2 billion in 2015 if its momentum keeps up. The previous standard of care for HIV-1 patients had been Atripla, a three-in-one compound that was comprised of one compound from Gilead and two other companies, meaning Gilead had to split its sales and profits three ways. With Stribild all four compounds are in-house, meaning Gilead keeps every dime. It's a quick way for Gilead to boost its margins and profitability.