Now that the final terms of the merger have been released, some important changes were announced that, in turn, change this investment thesis. Find out why these changes, along with the recent crash in oil prices, mean that now, with shares trading nearly 20% lower over the past three months, is the time for long-term income investors to consider investing in Williams Companies and Access Midstream Partners. 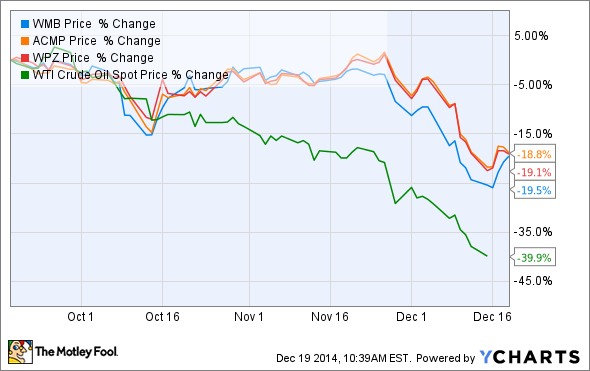 Changes to the merger terms and what it means for investors
Previously, Bloomberg had reported that Access Midstream would be merged into Williams Partners by the end of the third quarter of 2014.

In addition, Williams Companies, was planning to drop down all of its assets to the new Williams Partners -- becoming a pure play management company.

Management stated that upon closing the deal, it would increase Williams Companies' third quarter dividend by 32%, with 15% growth through 2017. The new larger Williams Partners, meanwhile, would enjoy 10% to 12% distribution growth through that same time period, and a far more secure payout. Specifically, management believed it could achieve $1.1 billion in excess distributable cash flow, or DCF, providing for a long-term payout ratio of 1.1.

On October 26, Williams Companies released final merger terms, and three things have changed. The first amendment isn't all that important.

However, what matters to investors is that Williams will no longer be absorbing Access Midstream -- rather, Access will be absorbing Williams Partners. Once the deal closes, units of the higher-yielding Williams Partners will cease to trade, and investors who do nothing will be left with units of Access Midstream, whose distribution will now be 50% and 30% higher than previous 2014 and 2015 guidance, respectively.

How this changes the investment thesis

As the above table shows, Access Midstream forward yield is still 1.3% less than Williams Partners', even when factoring in Access Midstream's 2015 distribution guidance of $3.65 per unit.

So, how does this change my earlier investment thesis, and why should potential investors in Williams Partners care?

First, within a few weeks, the higher yielding Williams Partners will cease to exist. That means current and potential investors need to consider whether they are willing to accept Access Midstream's lower yield.

Second, for current Williams Partners' investors who can't stomach the lower, though still considerable yield, you need to consider the tax implications of selling before the merger closes.

Lastly, with these things in mind, current and potential investors in Williams Partners need to decide whether they should invest instead in Williams Companies, Access Midstream, or both. If considering a position in Access Midstream, remember that an investment in an MLP carries a different tax structure than Williams Companies -- a regular corporation.The typical trade-off between general partners and their MLPs is that general partners usually have faster-growing payouts thanks to their incentive distribution rights, or IDR, fees. However, in this case, that might not hold true.

For example, Williams Companies has guided for 15% dividend growth through 2017, 36% faster than Access Midstream's 11% mid-range growth guidance. However, the assets that Williams Companies plans to drop down to Access in the coming years has analysts projecting that Access may have a faster payout growth rate through 2019.

Bottom line: Recent sell-off makes Williams Companies and Access Midstream a great long-term buy
Despite the slightly lower yield than Williams Partners, I believe the new Access Midstream Partners will likely make a strong long-term income investment, as will its general partner Williams Companies. With the recent oil sell-off, of which Williams has little direct exposure, I think the market is overestimating the risks to Williams and Access Midstream. Therefore, I believe today's prices represent a great long-term income opportunity you should consider for your diversified income portfolio.