Please ensure Javascript is enabled for purposes of website accessibility
Log In Help Join The Motley Fool
Free Article Join Over 1 Million Premium Members And Get More In-Depth Stock Guidance and Research
By Adam Levy - Dec 24, 2014 at 9:00AM

Facebook just made an app to increase photo sharing on Messenger.

Over the last week or so, Facebook (META 1.88%) Messenger users may have received pictures from friends covered in virtual stickers. Those stickered photos were made with a new app from Facebook's Creative Labs aptly named "Stickered for Messenger."

The number of different apps coming from Facebook is accelerating, and I only expect that trend to continue in 2015. As far as comparisons go, Stickered for Messenger is most similar to Hyperlapse for Instagram -- they're both apps made to leverage existing app user bases. Unlike Hyperlapse, however, Stickered has a clear path to revenue that should help Facebook monetize its 500 million Messenger users.

The app constellation strategy
Stickered for Messenger is Facebook's seventh new app of 2014. Prior to this year, Facebook had five apps including Instagram, it now has 13 including WhatsApp. That's enough to take up more than half a page in the iPhone 6's app launcher.

And that's exactly what Facebook is trying to accomplish with its slew of apps. The more real-estate Facebook takes up on a user's phone, the more likely that user is to engage with one of its apps. With multiple apps feeding into each other -- such as Stickered with Messenger, Hyperlapse with Instagram, and Instagram with the flagship app -- it's more likely they'll actually engage with multiple apps.

Stickered (as well as Hyperlapse) is built to leverage the existing user base of one of Facebook's existing apps. By nudging users to share their creations through Messenger, Facebook creates an instant advertisement for more people to download the app. Even if a user elects to share the stickered photo somehow else, others will want to know how it was made.

My point is that it's far easier for Facebook to make a popular app than nearly any other app company because it can leverage its existing app user bases. The more popular apps Facebook has in the app store, the easier it is to increase engagement among the entire constellation. The result is more advertising or monetization opportunities. 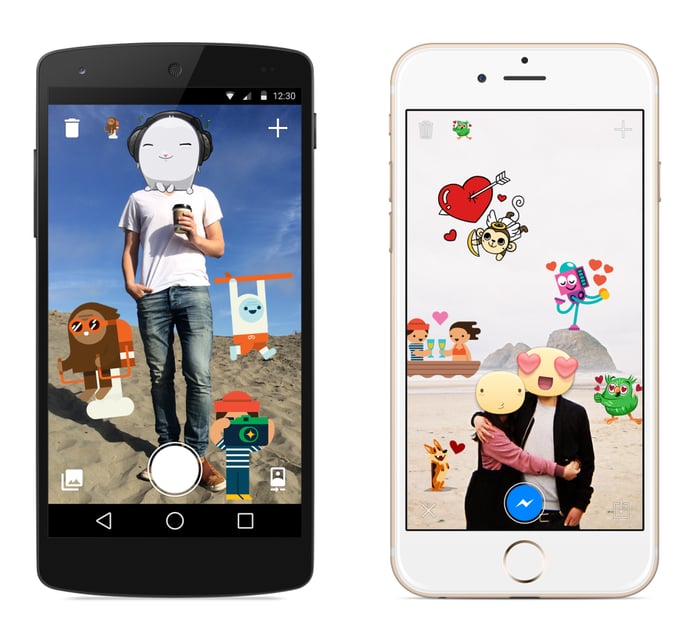 Facebook currently has a sticker store, but all of its stickers are free. While some come from Studios like Pixar and Lions Gate, which might be pitching in advertising money, there's no direct revenue from sticker sales.

Competing messaging service Line has a sticker store that's averaged $10 million in revenue from sponsored and user-generated stickers every month at the end of last year. With a user base less than half the size of Messenger, Line has generated a revenue stream that accounts for about 1% of Facebook's expected revenue in 2014.

It's very likely that if Facebook chose to pursue a sticker store with paid stickers and user submitted creations, it could have a $1 billion business on its hands within a few years (assuming continued adoption of Facebook Messenger). Analysts expect the Facebook to generate over $17 billion in revenue next year and approximately 30% more revenue growth the next year. $1 billion in additional revenue creates about 4.5% upside for Facebook in 2016.

Slow to monetize
I wouldn't expect Facebook to pursue a paid sticker store or attempt to monetize Messenger anytime soon though. Mark Zuckerberg noted on the company's most recent conference call that things don't really become interesting for Facebook until a product has about 1 billion users.

In the meantime, investors should expect Facebook to continue releasing apps to increase engagement among its portfolio of existing apps. Zuckerberg specifically mentioned Messenger, Instagram, WhatsApp, and Search on the conference call.

Still, it's nice to know the company has a potential $1 billion revenue stream sitting in its back pocket for when Messenger's growth starts to slow.